WASHINGTON, D.C.—House Republican Whip Steve Scalise (R-La.) joined Fox News Channel’s The Daily Briefing with Dana Perino to discuss Democrats’ relentless efforts to impeach a duly elected President of the United States through a sham process unlike any Congress has ever seen. Whip Scalise blasted Democrats for pursuing these shady, backroom tactics out of public view instead of focusing on getting things done for American families like lowering drug prices and negotiating better trade deals. 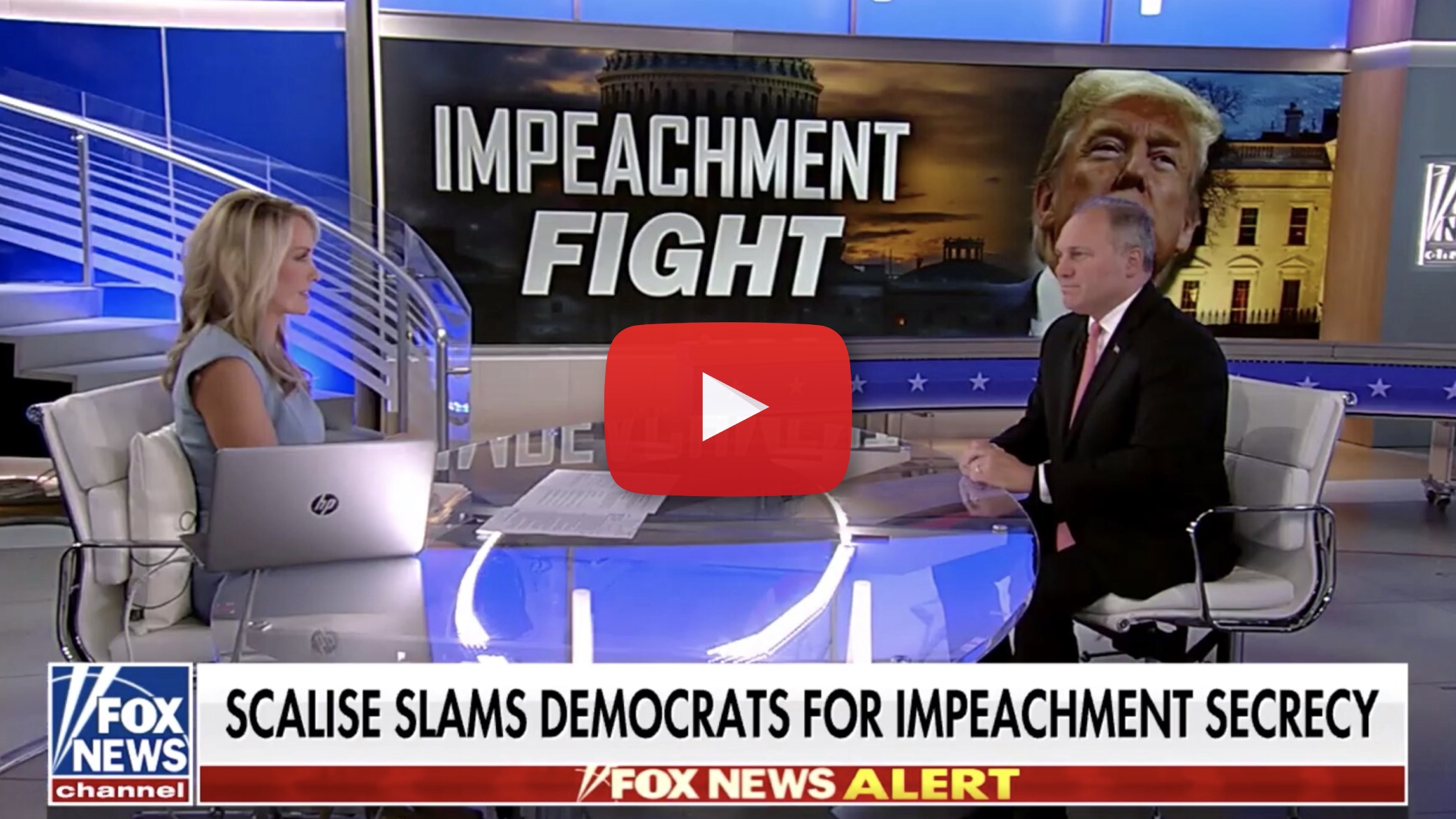 On Democrats’ use of shady backroom tactics to pursue impeachment:

“We need to keep hitting hard on the fact that they are literally trying to impeach a President behind closed doors. The fact that Adam Schiff continues today, [and] all of last week, to conduct all of these hearings in secret—he does not even allow the press in. Members of Congress that are not on the relevant committees are being turned away from the hearings. That’s how backroom shady this is. It’s not just a witch hunt, but literally it’s being conducted out of public view unlike what we’ve ever seen. All three times that we have had impeachment inquiries in the history of Congress, going back to Andrew Johnson, they have all been done first with a vote of the full House – that wasn’t done in this case. And then they have always been done in public. People remember the Nixon hearings that were done in committee. Everybody could watch it at home. You can’t watch it today. The press is not even allowed in that room. It makes you wonder, what is Adam Schiff trying to hide from public view as they are trying to impeach the President with no known high crimes or misdemeanors? They have been investigating [the President] for over two years. The Mueller investigation, that was going to produce their magical evidence that Adam Schiff, remember, he is the one who said he had more than circumstantial evidence and never showed it. Because it never existed.”

On Democrats neglecting solutions for American families to focus on impeachment:

“If you look at a lot of these members in the swing districts that Trump won, they are scared to death of having a vote, they don’t want to go back home and say they voted to start impeaching the President – yet they are allowing it to happen. But they have a leadership that’s allowing it to happen. I think the thing we need to do is continue to fight against what they’re trying to do in terms of this witch hunt – to expose it. And this is one of those cases where sunshine is the best disinfectant from what is rotten to the core. And then also show the American people what’s not getting done that should be getting done. Look, we would have a bill on the President’s desk today to lower drug prices. We have all kinds of things, better trade deals, all of these things that could be getting done.”

On President Trump standing up to Russia unlike the Obama Administration:

“…I keep telling people get back to the facts. I’ve read the transcript, just like you and so many people across this country. And, by the way, you don’t even need to read the transcript, just listen to the two people that were on the call. President Trump and President Zelensky of Ukraine. Both of them have said that it was a good congratulatory call, there was no pressure, there was absolutely no quid pro quo. The transcript backs it up and most importantly, the two people on the call said that there was no quid pro quo. Ultimately, Ukraine got the support before that phone call, by the way, President Trump was selling the Javelin missiles to Ukraine to push back Russian aggression from their tanks. Obama would not even sell those Javelin missiles.

“The bottom line is we’ve been helping Ukraine stand up to Russian aggression when President Obama wouldn’t do that. President Trump is actually helping them stand up.”

On the White House Congressional meeting regarding Turkey:

“We had a meeting at the White House last week that I was in with the President, and a number of things we were talking about; one is we don’t want to see Turkey move over further towards the Russians. The other big issue is all of those ISIS terrorists that are still being held by the Kurds in prisons, we don’t want them to escape. We want to make sure there is some kind of method to contain those terrorists. We’ve gotten some understanding that it will be the case, but we still don’t know enough to know. We want to see a plan and the President is laying out a plan to make sure that those terrorists don’t get released again and go out and do more damage and harm.”