WASHINGTON, D.C.—House Republican Whip Steve Scalise (R-La.) joined Fox News Channel’s The Ingraham Angle to discuss Democrats’ impeachment disaster, which has been a circus from the beginning. Whip Scalise emphasized that Democrats are starting to feel the pressure as their impeachment witch hunt proves to have a serious cost to the American people. The failed Democrat majority is neglecting bipartisan solutions, like USMCA, lowering drug prices, and funding our military to pursue their impeachment scam and hardworking families are paying the price. 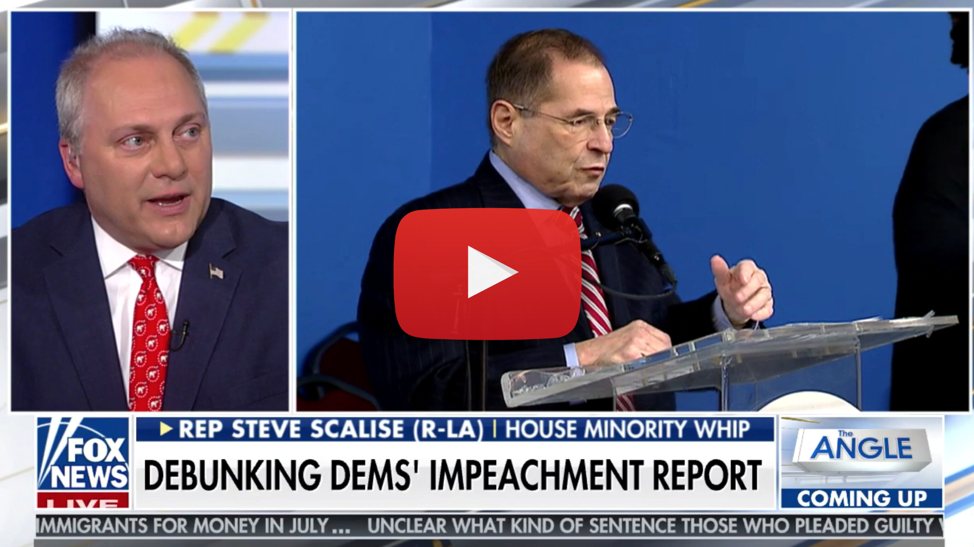 On Democrats beginning to realize their impeachment sham is a disaster:

“This thing from the beginning has been a circus. And if you talk about, you know, Jerry Nadler, the clip you just showed, that is going to be repeated over and over again like Andy Biggs said because what Nadler talked about back then were things that hold true still to this day. You know, there is nothing to impeach this president on, unlike Clinton. There were actual crimes committed by Bill Clinton. Whether they were impeachable, you could argue, but they were crimes.

“With [President Trump] they have tried. It is a hope for violation of law but they have yet to show anything because the President didn’t break any law. And so they just keep going on a witch hunt and it started with the President was tied to the interference with the elections, then the President was tied to collusion, then it was obstruction, over and over. There are some Democrats that are starting to realize this is a disaster. They don’t know where to go with this because they have put themselves in a hole and they can’t get out of it.”

On the Ukrainian President admitting President Trump didn’t do anything wrong and there was no pressure:

“The President didn’t do anything wrong. And ultimately, the victim they’re trying to claim was [Ukrainian President Zelensky], and Zelensky himself said nothing wrong was done to him. He got the aid, there was no pressure, and yet they still want to try to make him out as a victim and he wasn’t. [President Trump] stood up to Russia and helped Ukraine and Obama didn’t do it.”

On the abuse of the FISA Court:

“When [Republicans] were in the majority, we already covered abuses of the FISA Court. It concerns me. It should concern all Americans because we need to have confidence that the FISA Court works properly. I hope that Attorney General Barr uncovers and unroots all of the bad apples that are over there because there are still bad apples there.

“Everybody who has faith and confidence in the FBI and every intelligence agency should want to get to the bottom of this. Get the bad apples out of there. Some maybe should go to jail because of what they did to violate the law. But then, let’s clean up and make the process work for all Americans. It shouldn’t be a partisan issue.”