Whip Scalise emphasized that Congress must focus on practical solutions to reopen our economy, while holding China accountable for lying about Coronavirus and jeopardizing the health and safety of our country in the first place. Whip Scalise blasted Democrats on the Select Subcommittee on the Coronavirus Crisis for failing to investigate China’s lies that caused global suffering and economic devastation. 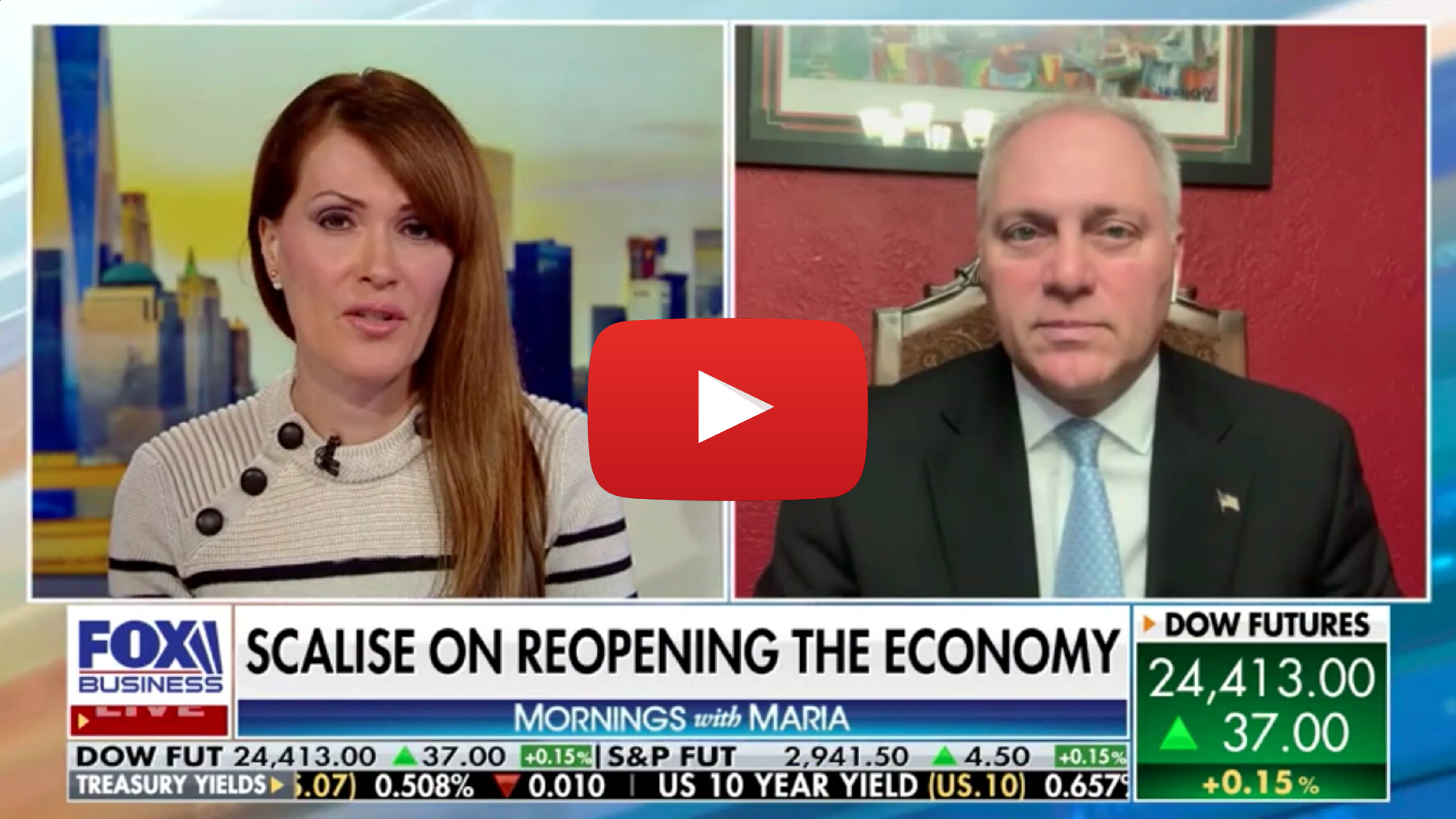 On reopening our economy with a focus on protecting economic and personal health:

“I agree with the President that we need to start reopening the economy safely. You’re seeing it happen all across the country now. We understand that the disease is still out there, and I’ll tell you I’m seeing revolutionary changes that are being made, also I’m seeing some revolutionary breakthroughs in science. And when you talk to some of these heads of these major drug companies about the things that they’re doing and the drugs they’re testing to come up with both cures, therapies, and a vaccine – you know, I feel very confident in where they’re headed, but I also know that people are aware of this disease and they’re also aware of the other challenges that are out there by not leaving. I’ve talked to so many medical experts that are concerned about the people that aren’t getting proper health care checkups, that aren’t getting their cancer treatments, or their mammograms, what kids are doing, not getting their immunizations, and how that could cause a measles outbreak. So, we need to make sure that we’re looking at all of this, and we’re helping safely reopen and sharing the protocols as we’re seeing each state having different levels of success.”

“Look, we’re Americans, we’re smart people. People can see what worked well, people can see what didn’t work well, and as we get back out there again you’re seeing people being a lot more cautious. And again, we know the vulnerable populations they need to take extra precautions, but people also say, ‘Give me the opportunity to go out and live my life.’ There are a lot of other risks we take every day and yet, you know, with car accidents and all the other things that that can go on in your life, you go out and you live your life in a smarter way and a safer way. But we also know the cost if you keep businesses shut in for much longer, there are a lot of businesses that aren’t coming back already, there are a lot that are teetering on the brink, and we need to get people back out again and get confidence up that people can leave their houses, and that’s slowly coming around. But this idea that we just will shut in until there’s a vaccine, that’s just not realistic. And so, I think most states are recognizing that, most people are recognizing that.”

On Speaker Pelosi’s idea for a socialist package that won’t help families and businesses recover from the Coronavirus crisis:

“You know, it took a lot to get agreement on the things that we’ve already passed, especially the CARES Act, and the Paycheck Protection Program. Some of the relief that’s working incredibly well. There’s a lot of talk about continuing to make improvements to things like [the Paycheck Protection Program] to have it have more flexibility for the reality of where we are today. You know, it was passed when it was anticipated that it would only be a few weeks that maybe a restaurant would be closed, and when they open up again their customer base would come back. Well now you’re seeing as people are opening up, they can only have 25 percent capacity, so the bill didn’t anticipate that. There’s talk of making some changes there.”

“But in terms of this thing, you know, Pelosi showed just how far left they’ve gone. Where her next idea of a relief package is bailing out failed states that had deficits prior to COVID-19. That’s not going to happen, they opened up the bill for hundreds of billions of dollars to be available for people that are here illegally, which makes no sense when you think about families who are struggling, and you know, businesses who are well established that are barely hanging on or closing. To say we’re going to turn that money over to people [here] illegally and changing voting laws to open up the door for voter fraud. You know, what world are [Democrats] living in where that’s their priority instead of helping families and businesses get reopened?”

On Democrats’ failure to hold China accountable for lying about Coronavirus:

“It’s unbelievable. You know, we’ve been pushing and all the Republicans on the [Select Subcommittee on the Coronavirus Crisis] that I’m leading on the Republican side have been saying, you know, while [Democrats] are trying to just bash the President every day and focus on the 2020 election, we’ve been saying, ‘Look, let’s be helping families get back on track and get businesses reopened, but let’s also be focused on holding China accountable.’ We all know the role they played in this. It started in Wuhan, the Chinese Communist Party hid this from the world. President Trump wanted our medical experts to go into China at the very beginning when we were hearing things that were going on, we didn’t know anything for sure, because they wouldn’t let us know. The Chinese Communist Party stopped medical experts from coming in to China, and then they lied to the world about what was going on, human to human contact. Oh, by the way, the World Health Organization was an able and willing party in that lie, and the head of WHO, Tedros, we’ve called for him to be brought in before our Committee and testify about why they were lying and saying that, ‘Oh you can’t spread it from human to human contact,’ when there were examples in other countries that it could actually be done that way. And then, they were critical when the President said we’re not going to let people come in from China. He put the flight ban in place and yet people like Pelosi and Joe Biden [were] criticizing him, but you also had the Chinese government and the WHO criticizing him. And it turned out the President was right there. Why aren’t we holding them accountable? Because they’re opening those wet markets again where all of this started. As crazy as that sounds, they’re going back to practices you just talked [about] at the top of the hour about clamping down on people that are protesting against their government. People are fed up with their government in China, so we need to hold them accountable, and that hasn’t happened unfortunately by Pelosi.”