WASHINGTON, D.C. — House Republican Whip Steve Scalise (R-La.) joined Fox News Channel’s The Story with Martha MacCallum this afternoon to discuss the one-year anniversary of January 6th. Whip Scalise called out Democrats for comparing January 6th to the attack on Pearl Harbor and the September 11th terrorist attacks – where thousands of Americans were killed. In addition, Whip Scalise called out President Biden for neglecting his campaign promise to unify the country, instead choosing to smear and vilify Americans who disagree with him. Whip Scalise urged Democrats to stop the political theater and start focusing on their self-made crises that are wreaking havoc on American workers and families right now. 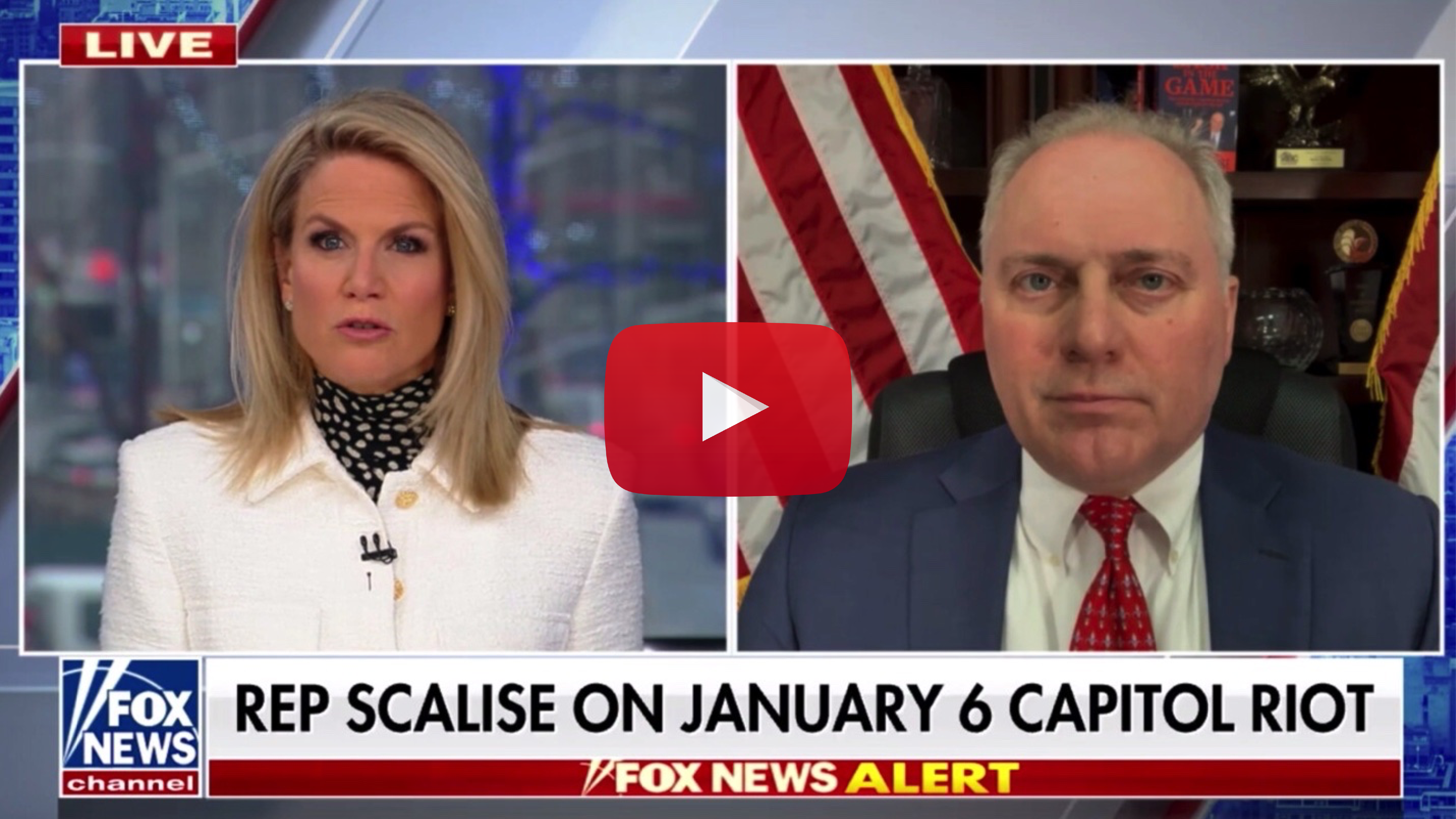 Click here or on the image above to watch the interview.
On Democrats politicizing January 6th:“Look, it was a day that nobody wanted to see happen. I was very quick to condemn those who broke into the Capitol. We were able to get back into the Capitol finally and finish our job later that day, which I thought was very important. “You know, but when you look at what’s going on today and just seeing the way Speaker Pelosi, President Biden, [Vice President] Harris are just trying to politicize this to push a different agenda. To do things like banning picture ID, for goodness sake. I mean, [this] has nothing to do with the other to try to compare it to the thousands who died on Pearl Harbor [and] on September 11th. “You know, it just is very clear: They want this to be [a] politicized day. Most of America doesn’t want it politicized. Most of America wants Washington focused on their problems like inflation, high gas prices, the COVID resurgence, the border crisis, which President Biden and Speaker Pelosi continue to just let go unanswered because they want every day to be about January 6th.”On Joe Biden’s failure to unite the country:“Well, it’s just sad to see President Biden with this mass obsession with [President] Trump. They’ve had it for the entire year of 2021. You would think that they would close the page on 2021 and start looking forward. And yet they still want to just continue to go and blame everything and attack Donald Trump and try to divide this country even further.“I don’t know if Joe Biden remembers, but he ran saying he was going to try to unite the country. He was going to represent and be the President for all of America. He also said he was going to crush the virus. He hasn’t done any of those things. He’s just worked to further divide the nation and create crisis after crisis. Self-created crises by President Biden that he refuses to address. And so, they want to just continue to talk about January 6th to try to change the subject. Most voters don’t get it.“You look at what happened in Virginia. They tried to make that Virginia election in November about Donald Trump and [Governor-elect] Youngkin won because he focused on standing up for parents having the ability to be involved in their kids’ education and to try to get real [opportunities] created, and open up the economy again. That’s where Democrats continue to miss the mark. They don’t care about the day-to-day problems facing families right now. They just want to continue talking about Donald Trump and anything else other than the problems they created.”