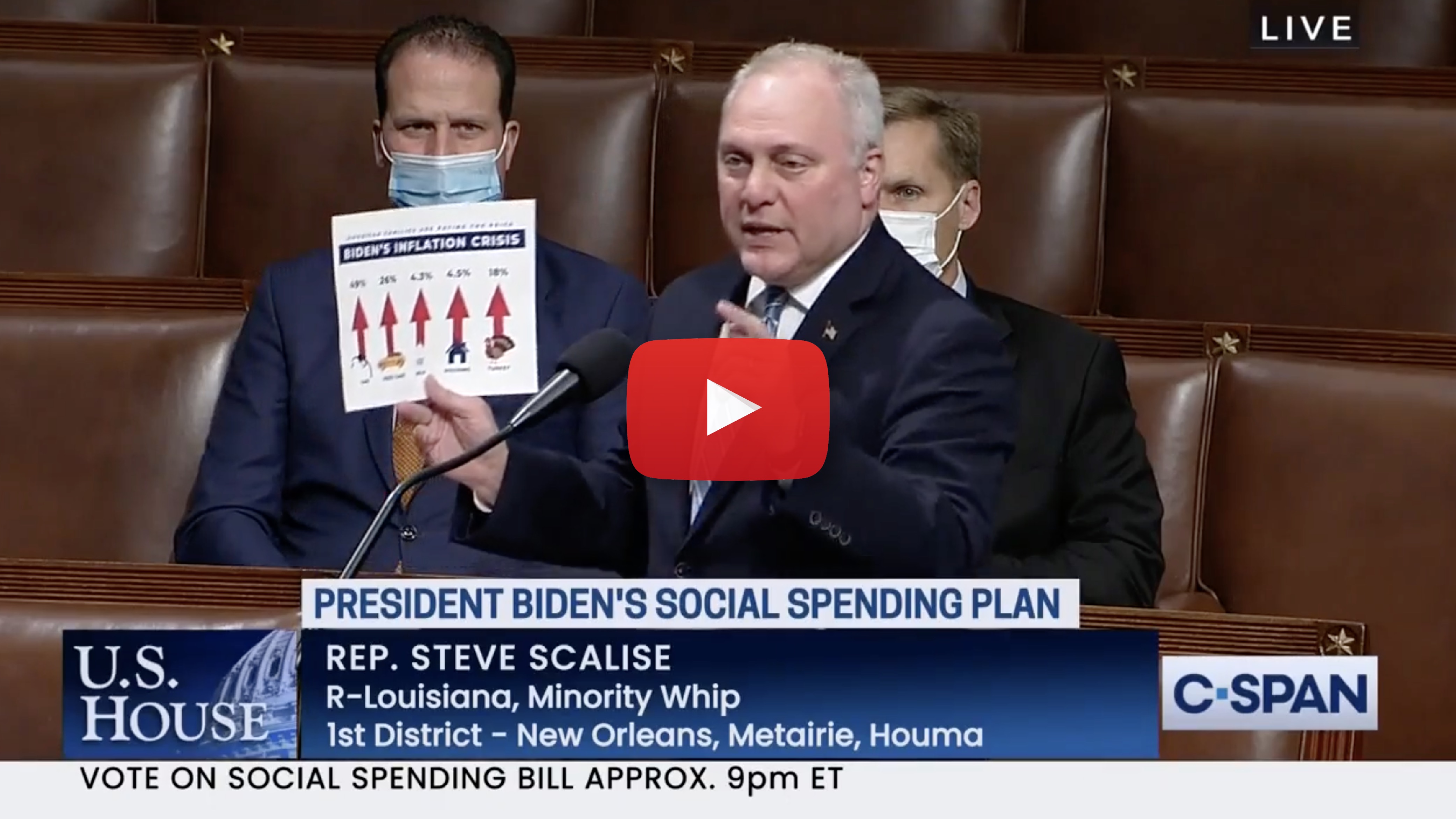 “We are facing, in America, crisis after crisis after crisis created by President Biden’s policies. Just look at some of the crises we are facing. There is an inflation crisis that [has] probably the worst effect on lower and middle-income families. They’re paying 50 percent more for gas. They’re paying more for everything they buy at the grocery store. This Thanksgiving is expected to be the most expensive ever because of President Biden’s radical agenda and all [of] the spending – trillions in spending that [have] already been done.

“And so, what is the answer of this majority? To raise more taxes. To spend trillions [of] more dollars and jacking up inflation even higher, and who is it to benefit?

“Let’s look at the Joint Committee on Taxation, who just came out with an assessment of this. [Do] you know, who benefits the most [from] this bill? The largest decreases go to those making $1 million or more! That’s right! The largest tax cuts go to the multi-millionaires. Do you know who gets the smallest tax cuts? The smallest go to those making $40,000 to $50,000. They get the least amount, and where are they paying for it?

“They’re paying for it in a natural gas tax. Everybody who uses natural gas to heat their home this winter is going to be paying about 30 percent more for what? To give tax breaks to millionaires in five states. And don’t just take [the] Joint Committee on Taxation’s word for it.

“Let’s listen to Bernie Sanders, the Chairman of the [Senate] Budget Committee. Do you know what he just said [today] about this? ‘You can’t be a political party that talks about demanding the wealthy pay their fair share of taxes and then end up with a bill that gives large tax breaks to millionaires.’ That’s what Bernie Sanders said. He also said, ‘The hypocrisy of that is too strong.’

“Giving tax breaks to millionaires in this bill, and for what? So that low-income families who are paying [for] it can then see their tax dollars go to give $450,000 checks to people that come here illegally. That’s right. You’re going to be paying 30 percent more on your household electricity bills for 87,000 more IRS agents who President Biden said wants to comb through your bank accounts. If you make more than $10,000 – not the millionaires and billionaires – if your grandmother on a fixed income makes $10,000, 87,000 IRS agents will be unleashed on her bank account to then go and give $450,000 checks to people [who] came here illegally.

“Stop this madness! Did you not pay attention to the results of the Virginia election just two weeks ago? They said, ‘Enough of the spending in Washington!’ Let’s focus on helping those hardworking families who are being crippled by this inflation.

“This will only be made worse if you throw trillions [of] more dollars in taxes and spending onto this dumpster fire. Let’s save America. Stop [and] defeat this bill.”