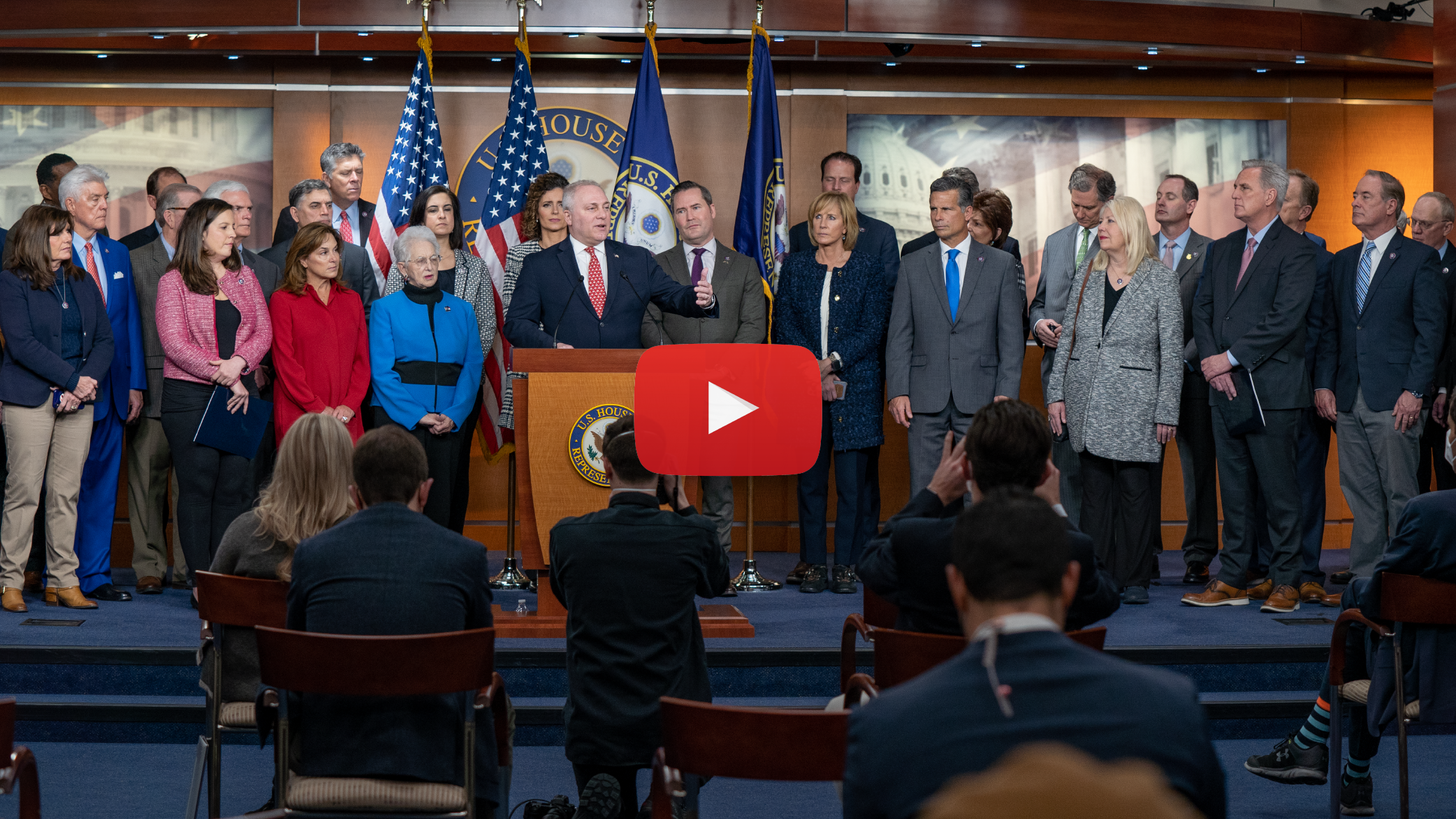 Click here or on the image above to view Whip Scalise’s remarks.
On President Biden’s disastrous first year in office:“What a difference a year makes. One year ago today, Joe Biden took the oath of office as President of the United States. And he walked into a White House that had not one, not two, but three different vaccines on the brink of approval because of President Trump’s Operation Warp Speed. And not just three safe and effective vaccines – he also had a number of therapeutics. He had an economy that was poised for a strong rebound. We had border security. We had energy security. We had peace accords between Israel and Muslim nations. That was just one year ago today. And what did President Biden say yesterday to give an accounting for this last year? He literally just doubled down on all of the failures that we’ve seen this last year. If you were even grading on a curve, Joe Biden would get an ‘F’ for failure, and it’s the American people that he’s failed. Those hardworking families that go to the grocery store and they’re paying 20 percent more for bacon, and he doesn’t think that’s a problem.”On President Biden’s self-made border crisis:“When you think about the border crisis. Where now every state in the nation is a border city and community because you’ve got drugs coming in across our border. And now fentanyl and other drugs [are] killing people in every community in America because Joe Biden not only stopped building the wall but sent a message all across the world, not just South and Central America, that our border is open.”On the Biden Administration’s radical climate agenda:“You look at the energy crisis, and, of course, people are longing for those days [when] they were paying less than $2 a gallon. I’m not talking about decades ago when [Conference Chair Stefanik] was just a twinkle in her parents’ eyes. I’m talking about a year ago when people were paying less than $2 a gallon because we were making our own energy here in America, and we were making enough to where we could ship it around the world and help our allies. We were undercutting Russia. We were undercutting OPEC nations.“And then you fast forward – [on his] first day in office, Joe Biden kills the Keystone pipeline. [He] sends a message that he doesn’t want America to be energy secure. And it wasn’t because he was against pipelines or fossil fuels because he greenlighted the Nord Stream 2 pipeline so that [Vladimir] Putin could have more leverage over Europe. He begged OPEC nations to produce more oil, which by the way, emit more carbon than oil made here in the United States. If you actually want to save the planet and lower carbon emissions, make the oil here. Make products here in America. It’s not just good for our economy and jobs and those hardworking families who he’s kicked to the curb, over and over again, but it gets our economy back going, and it sends a message to those other countries that we’re going to have strong leadership in America.” On President Biden’s disaster in Afghanistan and weak foreign policy against Russia:“Weakness has consequence. We saw that in Afghanistan. For the President to say that he would do it over again the same way – my God. What a frightening thought it is to us here in the United States [and] to our allies all around the world, but also to our adversaries. We know Russia was watching what happened in Afghanistan. We know that China was watching. [So was] Iran. All of our adversaries around the world were watching, and they saw the weakness, and they’re capitalizing on it right now. Do you think the strong, wonderful people of Ukraine think it would be a minor incursion if [Vladimir] Putin moved tanks into Ukraine, even a piece of Ukraine? Of course, they don’t. But he does. And by showing that weakness, it has costs all around the world. Americans are tired of paying the price for this President’s failures. They want and know what’s better for America.”On House Republicans’ bold agenda planned for this upcoming year:“We, as House Republicans, are fighting for those hardworking families too. And we’re going to be rolling out a bold agenda to confront the many crises that Joe Biden has created. How to restore freedom, how to restore opportunity, how to restore hope for people who have given up. That’s what we stand for. That’s what we’re going to be fighting for. And we’re going to be rolling that agenda out.”