Whip Scalise emphasized the need to make this bill work so we can protect the health and safety of Americans, while getting economic relief in to the hands of families and businesses working to get through this crisis. 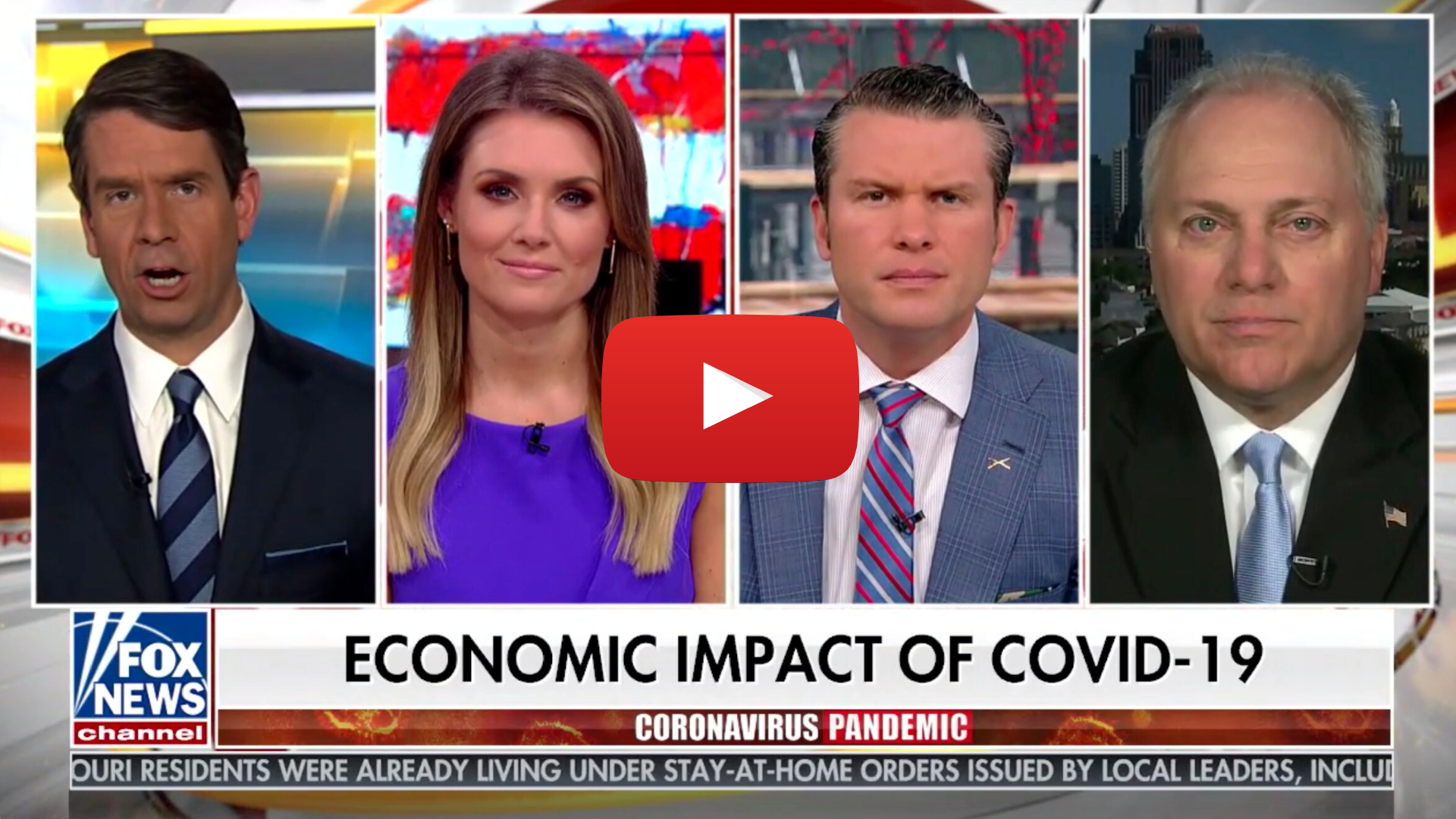 On the need to focus on implementing the CARES Act to get money in the hands of families and small businesses:

“A lot of work has been put in this last week into making phase three work successfully for those companies and those families that are struggling, and you saw record numbers, 10 million unemployed just in the last two weeks. And you know, look, we’re seeing every business trying to figure out how they’re going to hold on to their business and their workers. The bill we passed last week was designed to help bring people back off the unemployment rolls and hold on to the workers that you have, while they can get paid under that bill and it would be a forgivable loan. You saw yesterday the program just went online in tremendous success in that program. We’ve seen a lot of interest just in the last week. I’ve had calls with every kind of small business group, and medium and large size business group, that are trying to figure out how to make it work for themselves. Treasury Secretary Mnuchin has been working overtime on behalf of President Trump who really, President Trump was the one who said, ‘I want to make sure the money gets in the hands of people and of businesses that we can hopefully have hold on through all of this, so we can have an economy to come back to.’ And yesterday, the program came off to a really successful start. There’s a lot of work to be done, but Treasury was even working last night to revise some of the rules to make sure that there’s clarity, so people know how it works for them, so that they can apply for and get these loans and hold on to their jobs and their small businesses, families can hold on to their homes.”

“Right now, my focus has been on making phase three work. There’s so many aspects of phase three for families that gives a lot of relief. I mean, relief for individuals. You can get loan forbearance for example, where you can go to your bank and ask them for an extension of maybe three months at the end of your note so that the next three months you don’t have to pay your house note or business note, that’s in the bill. The ability, again, to get these small business loans, medium and large size companies, companies over 500. Everywhere from the biggest companies in the world, you’ve heard about the airline industry, all of the companies that are struggling right now have an ability to go and get relief so that they can hold on through this crisis and then when we come out of this, hopefully in the weeks ahead, those jobs are still there. Our economy is something we can come back to. The focus needs to be on making that bill work and a lot of energy, by the way, has been focused on making it work and getting to the next step.”

On keeping the focus on the health and safety of Americans, while getting the American economy back open again:

“When you look at what is in this third bill, and, by the way, there were two other bills that were passed prior to that so you have somewhere near $3 trillion of taxpayer money that’s out there right now working for families, and families are just working through the details themselves to see how it’s going to work. Like Treasury Secretary Mnuchin said yesterday, maybe another two weeks, that IRS component where people are going to get $1,200 per person coming through their IRS automatic deposit, those kinds of things haven’t even happened yet, that was in the third bill. So, let’s make all the focus on getting that money into the pockets of families so that they can get through these next few weeks. Clearly, there’s going to be talk about what happens next in Congress, but especially what we can do to get the economy back open again. And I know President Trump is focused on that every day, while he’s focused on the health and safety of the American family first.”

On working with President Trump and FEMA to ensure healthcare professionals in Louisiana get the supplies they need:

“That’s something we’ve been working with the President, all the way down through FEMA. I talked to the FEMA Administrator at the beginning of this week and they, assured us they were going to get more PPE’s and ventilators down to New Orleans and they have, they’ve gotten it through the state’s Office of Emergency Preparedness. I’ve been working with our Governor, John Bel Edwards on that too, so everybody is working together. I talked to the head of one of the hospitals again last night, Warner Thomas, who the President mentioned, who has been working really hard. Like all of the other hospitals in the region. People have been stepping up to the challenge. Our hospital workers are stepping up to the challenge. We wanted to make sure we got them more protective equipment, the PPE that you hear is in such demand and we were able to get over 110,000 more PPE’s for those workers that are really the brave, frontline workers taking care of people. So, everybody is pulling together. You know, it’s horrible, the tragedies that you see are real, but people are doing a better job of sheltering at home, of washing their hands and social distancing because they realize every American can play a part in stopping the spread of this disease.”