WASHINGTON, D.C.—House Republican Whip Steve Scalise (R-La.) joined Fox News Channel’s Fox and Friends to discuss Twitter’s politically motivated decision to selectively censor the thoughts of conservatives, including President Trump. Whip Scalise also emphasized the importance of reforming the FISA Court to prevent the same type of abuses that took place against President Trump and his campaign, and to ensure accountability for all of the bad actors who broke the law. 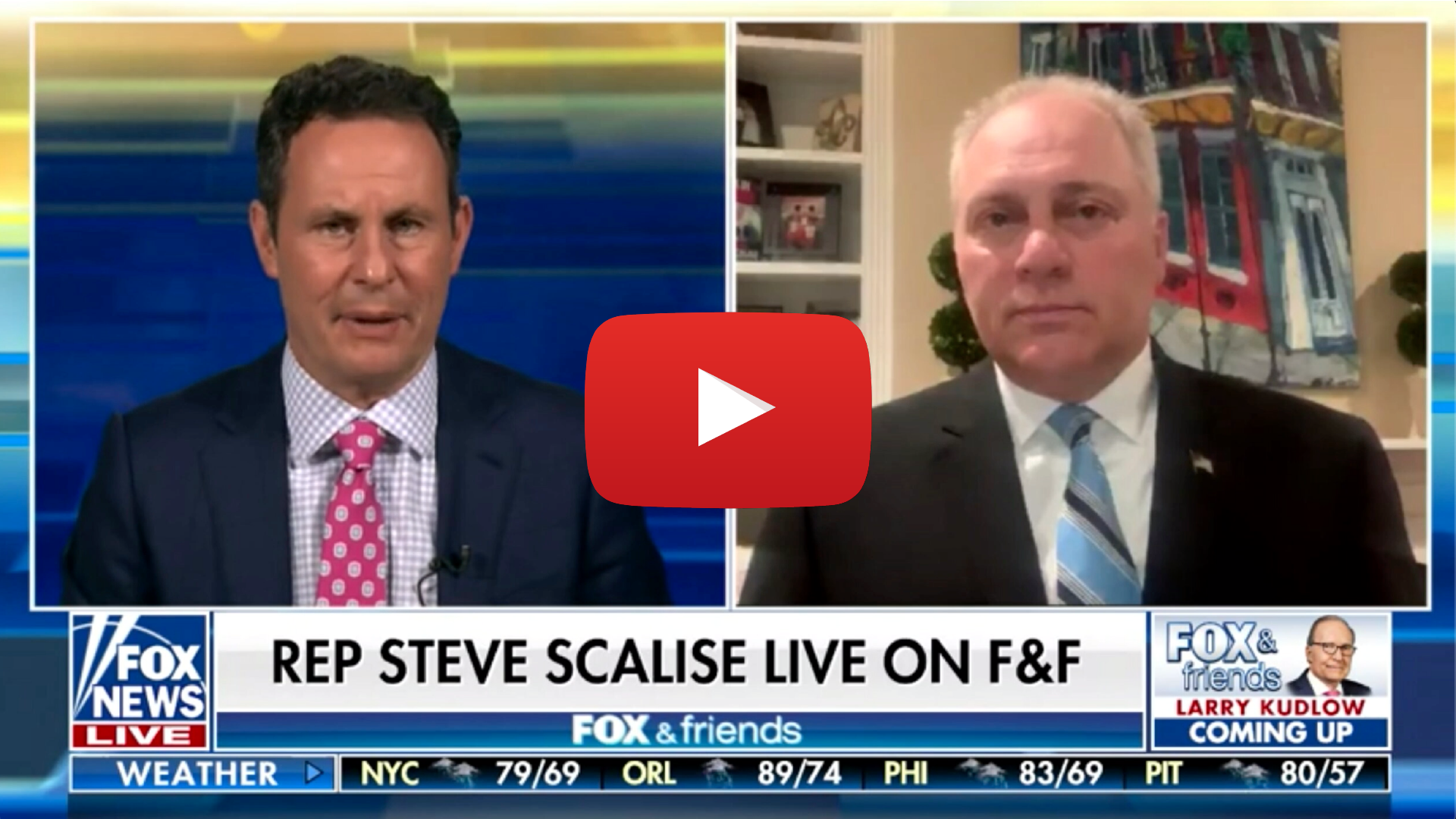 On pushing for justice to be served for George Floyd and his family:

“First of all, it was just disturbing watching the video of what happened to George Floyd. We all mourn his loss, and justice needs to be served there. But just going out and destroying cities is not an answer to that. Let’s push for justice to be served, and you see the local officials recognizing that this has to be addressed, what happened to George Floyd, and let’s not tarnish his memory with that kind of reaction.”

“It’s concerning that Twitter seems to be picking sides now politically, and it seems like they’re carrying out a vendetta against the President. That’s not supposed to be their role, they present themselves as a public square. This isn’t, you know, just a private company, this is a company that says they are a [public] square and yet they’re only censoring selectively, it seems like the thoughts of conservatives and high-profile conservatives including the President. Twitter really needs to reevaluate what they’re trying to do because they’re going to literally force the creation of an alternative that’s not going to be censoring, and selectively censoring at worst.”

On reforming the FISA program to prevent future abuse and ensure accountability:

“Well clearly, FISA needs to be reformed because it’s well known how it was abused, and it was abused by people within the Justice Department, the FBI, to try to take down a candidate for President of the United States and Donald Trump. And so, there has to be accountability. But look, FISA has been used successfully in the past to track terrorists abroad, it’s why the law was created, but it was a very narrow scope and the way it was used was supposed to be in a way that only applied to terrorists, or Americans who were abroad fighting with terrorists, not to spy on a candidate for President or people that were working around him. And so, the FISA Court has to fix their problems internally. The bill was trying to do some reforms, didn’t go far enough, clearly, but at the same time, there was more work that needed to be done. And then you throw in the fact that there still has been no accountability, Brian, there has to be accountability for those people that abused the FISA Court, that did other things illegally within the FBI, some of those people need to go to jail, and I think once that happens you’ll see an ability to come back together and get this program back on track in a right way with proper guardrails and reforms. But it wasn’t ready for primetime, I’m glad they pulled it [from the House Floor]. We had the votes to kill it, and we worked hard to make sure that the bill would have died if it came to the [House Floor].”

On demanding accountability for the FBI probe into President Trump’s campaign:

“Well, [an investigation into FISA’s abuses] might be a distraction to the people who are about to get caught with their hand in the cookie jar. I mean, these are people who literally used the FBI, there were FBI agents, not by and large all of them, but FBI agents who used their position to try to take down a candidate for President of the United States. We all ought to be concerned about it. There needs to be accountability and those people need to go to jail who abused their power and broke the law.”