WASHINGTON, D.C.—House Republican Whip Steve Scalise (R-La.) joined CNBC’s Closing Bell to discuss the COVID-19 relief package in Congress and the importance of ensuring the billions of dollars in funding that Congress already appropriated in the CARES Act is being spent responsibly. Whip Scalise outlined the federal government’s strong partnership with states, including working alongside President Trump to increase COVID-19 testing capacity and taking action to deliver a safe vaccine to the American people in record time.

Whip Scalise also stressed the need to listen to the science, including recent reports from the American Academy of Pediatrics, and safely reopen schools this fall to provide students in-person learning opportunities. 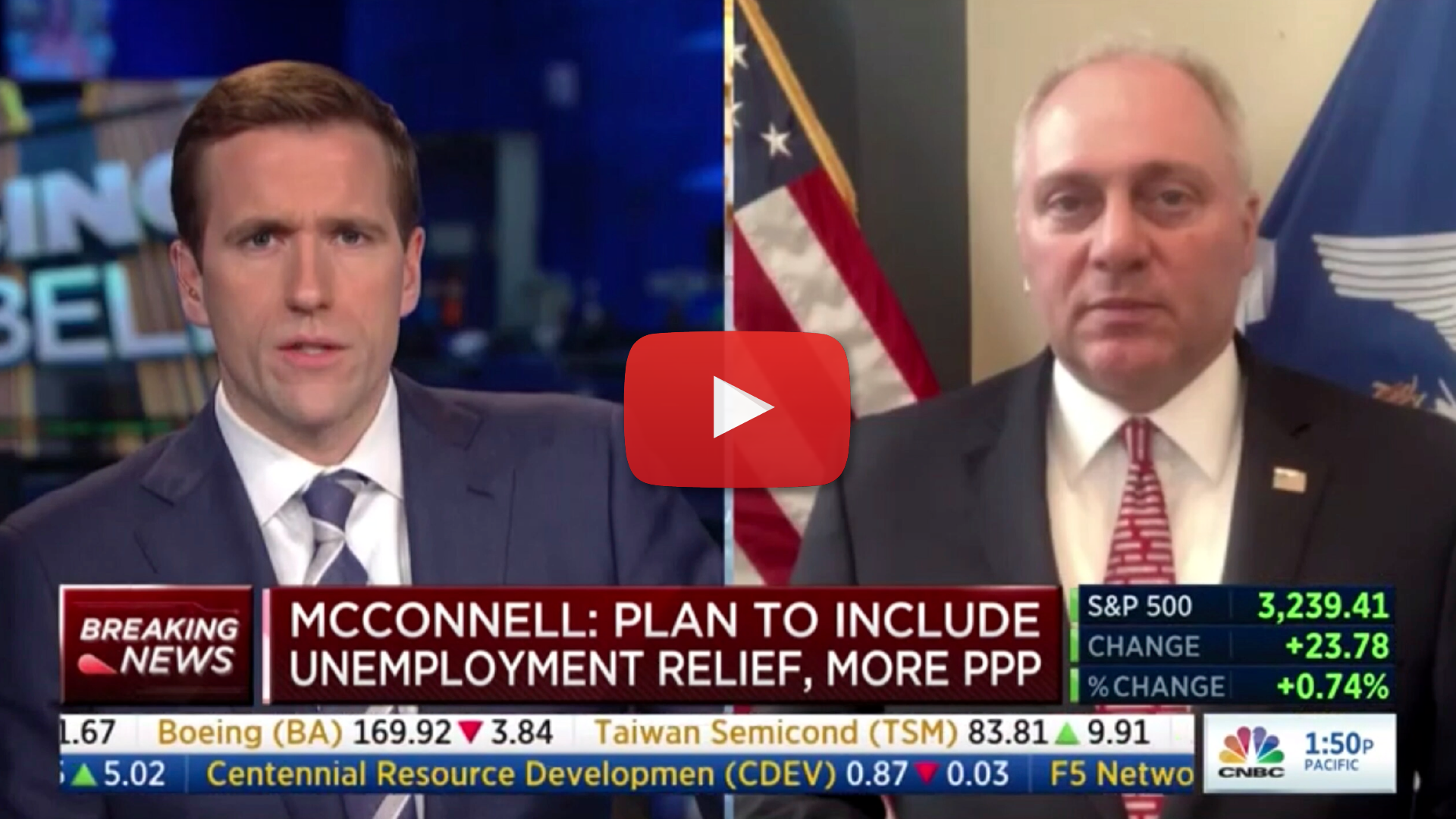 On the upcoming COVID-19 relief package:

“Well there were a number of things that are in the bill that would help at the local level. Especially when you look at school aid. You know, that’s right now the big debate, are school’s going to reopen or not? I’ve been in meetings with medical professionals that have talked about the importance of safely reopening schools as opposed to just allowing the online schooling. So, I know for hand sanitizer, masks for schools, there is already money available in the monies we sent out in the CARES Act that schools can use for that. But I think in Mitch McConnell’s bill in the Senate, there would be over $100 billion in additional money there. But, you know, you talk about state aid, we definitely can’t be bailing out states that had problems prior to COVID-19, our focus ought to be getting businesses back up and running, safely reopening schools, making sure that there’s liability reform, those types of things.”

“If you go back to the CARES Act, we put $150 billion in place for states and there’s not a single state that spent all of that money. So clearly, we’ve been concerned about states, but we’re also concerned about safely reopening the economy and safely getting kids back into the classroom and there are really good protocols for how to do that. Groups like the American Academy of Pediatrics have put out really good guidelines and if schools need assistance there’s money in place for that. But we need to make sure that the money, there’s over $500 billion that we appropriated in Congress that hasn’t been spent yet, let’s make sure that money is working. And if it can work smarter for families, for states, let’s make that money work smarter, more flexible and there’s a lot of talk about that as well.”

“We have seen from a lot of our small business owners that are trying to bring their workers back, we ought to be encouraging people to get back to work where they can. And yet, you hear whether it’s there, whether it’s in nursing homes, they’re saying the costs are up dramatically they can’t even afford to bring workers back because with the $600 enhanced benefit, five out of six workers are making more money not going back to work than going back to work, that’s not the kind of incentive you want in place.”

“You have had a lot of businesses that have said they can’t bring their workers back or they can’t bring all of their workers back, it’s a real problem. So, what’s a fair amount? What is the amount to properly do it? I don’t think anybody would argue, some might, that you should pay people more money when they’re not working than if they were going back to work, if the job is there and available for them, but it’s a problem. It’s a real problem that you’re seeing, whether it’s in hospitals, nursing homes, clearly in a lot of restaurants we’ve heard this over and over again. It’s not just some isolated incident.”

On additional funding for state and local governments:

“State and local governments got $150 billion [in the CARES Act]. That’s more money than you’ve seen some of these industries get. Look, we know we want a thriving airline industry and right now I flew on a plane to come back here today to Washington and the plane was less than half full. You know that the problem’s there. States are having their own issues and so we’ve been helping states. $150 billion is still a lot of money, and like I said, there’s not a single state that spent all of the money we sent them. So, I know you’ve got some states yelling and screaming for more money when they haven’t spent the money we already sent them. The best way to resolve this is to work to safely reopen their economies. We know that there are spikes, but we’re also knowing no hospital system in any state is overrun.”

On President Trump’s historic response to the COVID-19 pandemic:

“We’re working with those states that have issues, we’re giving more testing equipment. Every day we’re increasing our testing capacity. You’re looking at the therapies that are being developed that President Trump talked about today where we’re very close to a vaccine. You talk about a revolutionary change where we put a lot of money, by the way, in these relief packages into making sure agencies like the FDA or the National Institute of Health, and CMS can go and try to find a cure for COVID-19 and they’re almost there. Phase three of testing for vaccines, Remdesivir and other drugs that are therapies. That’s revolutionary for any kind of virus that we’re that close this early in terms of relatively speaking how a virus works. And so, let’s make sure that we’re putting the focus in all of these places, not just one. But for, you know, for [states] to say they didn’t get any relief when they got over $150 billion and they haven’t spent all that money, you know, let’s stay focused on where the problems are and get our economy safely back open and get kids safely back in schools.”