WASHINGTON, D.C. — Today, House Republican Whip Steve Scalise (R-La.) joined Fox Business Network’s Mornings with Maria to discuss Dr. Fauci’s recently uncovered emails from the early stages of the COVID-19 pandemic revealing the possibility that the coronavirus originated from a Chinese lab, which he and many in the mainstream media denied over the past year. Whip Scalise also criticized President Biden’s foreign policy failures — from seeking to give away America’s vaccine technology to China, to failing to investigate the origins of the virus, to allowing Russia to finish its Nord Stream 2 pipeline that previously faced sanctions. Additionally, Whip Scalise slammed President Biden’s poor handling of the crisis on the southern border and called on both President Biden and Vice President Harris — neither of whom has visited the border — to go down and witness the disgraceful treatment of migrant children apprehended while trying to enter the country. 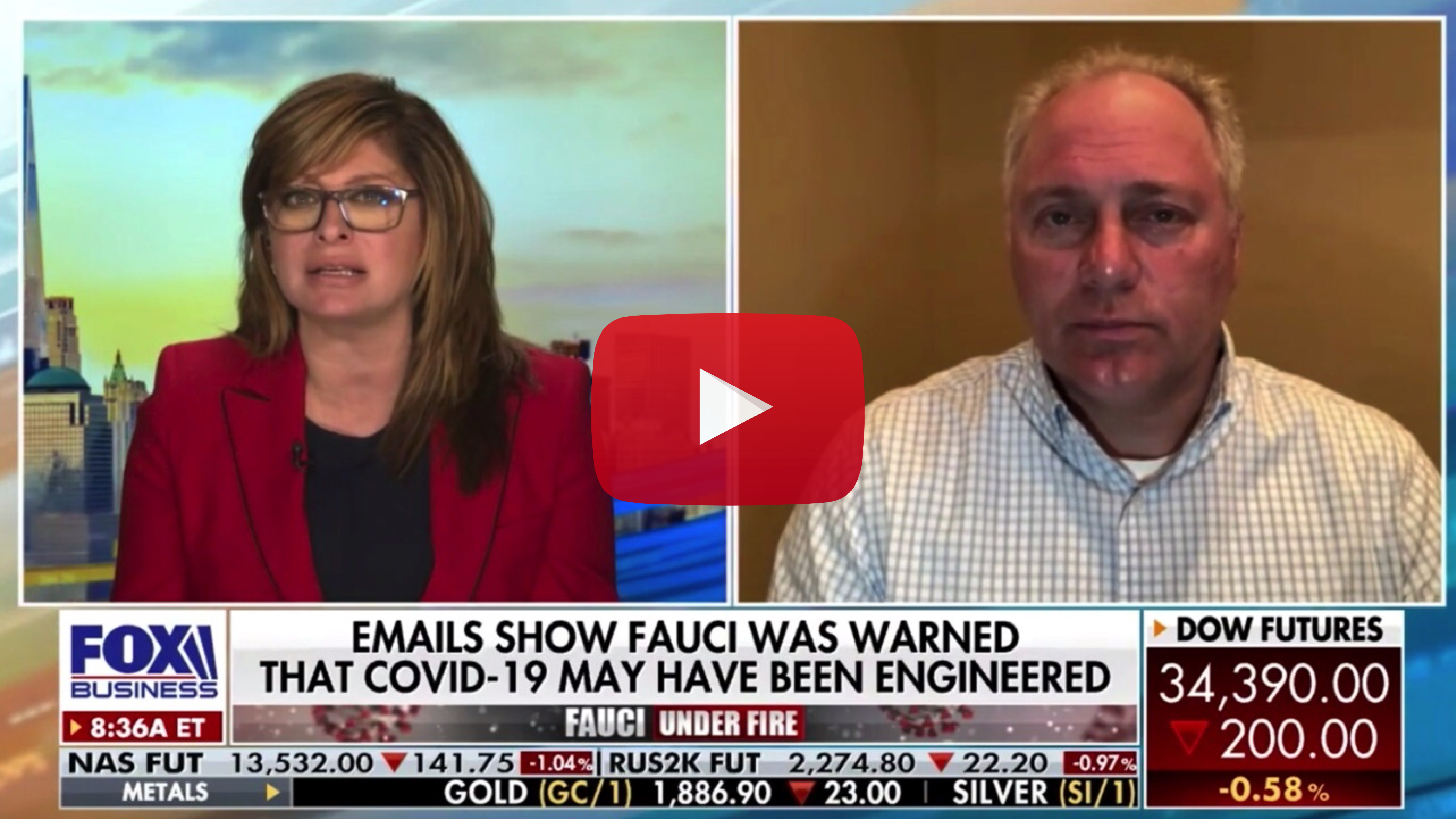 On Dr. Fauci’s newly released emails from the beginning of the COVID-19 pandemic:

“There [are] just some very alarming things we’re seeing in these emails, and of course, they just got dropped a few days ago. But I saw, like you did, back in February of 2020 where Dr. Fauci was acknowledging or was getting emails sent to him saying that there was a real distinct possibility that this virus started in the lab in Wuhan, which many [House Republicans] were saying over a year ago, and we were demanding investigations, Maria, over a year ago into the origin of the virus, and we were being shut down by Democrats in the media.

“I mean, think about this. You had a lot of the social media platforms blocking people who were suggesting that it started in the lab — this gain of function issue, and you know, Rand Paul’s been going after this for a long time, again, being called a lot of names — turns out, may be true. Masks — a lot of questions about the effectiveness of masks that you purchase commercially, all of this in these emails. We need to have a hearing on this, Maria.

“We need to get to the bottom of this. Dr. Fauci needs to be brought in under oath to answer questions about this. We’ve been calling on Pelosi to do this. They’ve been covering up for China, and frankly, for a lot of these other questions that we’ve been raising — just calling people names, conspiracy theorists and all this — turns out it might be true.”

On the revelation that the coronavirus might have been engineered in a lab:

“But going back to that email, I saw that very same email, and it was alarming because, again, it points out a distinct possibility that this was engineered in a lab — not transferred from bat to human — which is all we were being told by the scientists. They were saying, ‘Don’t even think about this idea that it could have been engineered in a lab.’ But also, and if you go back, President Trump’s Coronavirus Task Force, from reports I’ve seen, even Mark Meadows, President Trump’s Chief of Staff, said just the other day they were not even told by Dr. Fauci about emails like that where Dr. Fauci is being told by other scientists, ‘Wait a minute, we’re looking closer at this thing, and we need to because it could very well be engineered.’ He never shared that from what people in the Trump White House said with other people on the Coronavirus Task Force. This was a task force President Trump put together. The bottom line is that [it] was before we had shut down America before we’d seen the global pandemic be called out. Those could have saved lives. Those questions being answered could have saved lives. We need to get to the bottom of this. We need hearings on this specific question.”

On President Biden’s weak leadership on the international stage:

“Look, every President is tested early in their administration. We just don’t know what that test is going to be. President Biden is being tested on a number of fronts — from rockets being fired into Israel, and he’s siding with these anti-Israel allies of his in Congress, the Democrats in Congress that are siding with Palestinians, telling him not even to replenish the Iron Dome missiles.

“You’re looking at what he’s doing with Russia and China, and as you said, Russia and China want to both collude to undermine the U.S. dollar. But again, why did President Biden give a gift to Russia just days ago where he waived any kind of penalties and sanctions against the Nord Stream Pipeline? Here, you’ve got President Biden shutting down the Keystone Pipeline, killing American jobs, and hurting our relationship with China. And then, he gives a gift to Russia right before Russia threatens to undermine U.S. currency. Where is President Biden on any of this?

“He is failing miserably [in] these first big tests where foreign countries — our enemies — there are bad people around the world. President Trump stood up to them on every front. You didn’t see any of them trying to test President Trump like this because they knew he wouldn’t take it. Biden’s just acting as if he doesn’t know what’s going on right under his nose. These are very big concerns, and it’s got to be confronted.”

On President Biden wanting to give away American vaccine intellectual property to the Chinese Communist Party:

“It looks like [President Biden is] helping them get there — it’s unbelievable. But look at what President Trump did to confront Huawei where our defense assets were using Huawei technology, a lot of commercial assets in America and around the world, President Trump not only blocked their ability through the Defense Department, but he was pressuring other countries when Great Britain was using their technology because they steal data, and you’ve got President Biden giving away intellectual property, trying to give away the vaccine intellectual property, Maria, and you’ve covered this well. But he wants to give China our vaccine DNA — the technology for the mRNA that created these viruses that are saving lives but also future viruses will be built on that same American technology. Biden wants to give that away to China. Where is this concern about American jobs and America’s economy?”

“I’ve been down there myself. Many of my colleagues have been down. I went to that Donna Detention Facility, and it looks like child abuse by the Biden Administration — the way that they’re keeping those kids in cages. And by the way, Dr. Fauci even admitted that they’re violating the CDC guidelines on how to treat people. Many are coming over with COVID and spreading it because they have facilities designed for 250 people, and Biden’s putting over 4,000 in these facilities because he’s lost control of the border, and just in these last 24 hours, got rid of the ‘Remain in Mexico’ policy formally. That was something that President Trump negotiated with Mexico to get control of our southern border. It’s out of control, and it’s not just South and Central America. People on the terrorist watch list from Middle Eastern countries are coming across because the border’s wide open, and Kamala Harris, who was put in charge by President Biden, is trying to walk away from this thing. It’s all on her lap right now, but she needs to go down there. She has yet to visit the border. I’ve invited her. She ought to go today. President Biden ought to go today and see just how disgraceful the treatment of these young kids is being carried out by the Biden Administration.”

“President Biden has given control of America’s southern border to the drug cartels from Mexico. That’s what’s going on right now. Border Patrol agents tell you what’s going on and what needs to be done to stop it. Trump had gotten the border under control. Biden’s got it wide open, and it’s a disgrace what they’re doing to these kids.”