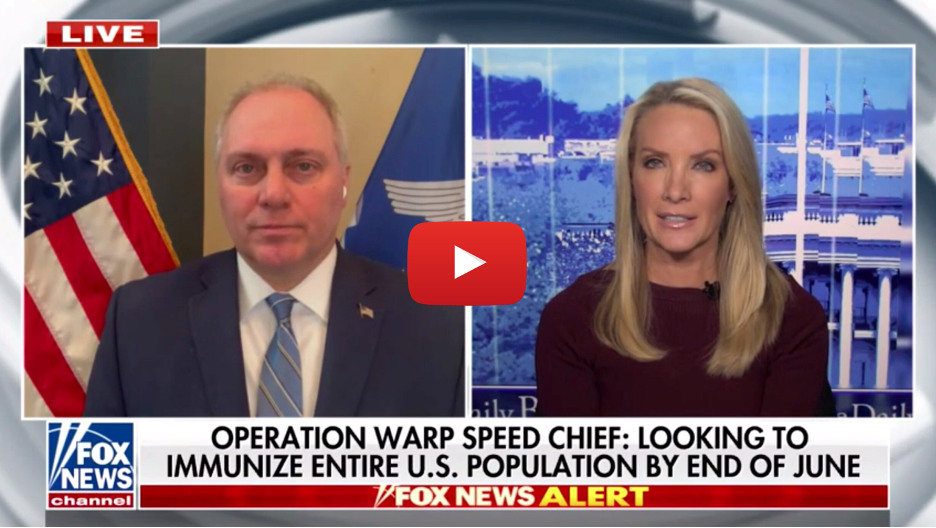 On the unprecedented success of Operation Warp Speed:

“We’ve really been working for months on [extending the Paycheck Protection Program]. It should have come to the House Floor months ago. Back in September, we had agreement amongst most Democrats and Republicans to bring another round of Paycheck Protection Program funding. For various reasons, Speaker Pelosi has refused to bring that to the Floor. I will say, as we’re looking at this, this revolutionary breakthrough in Operation Warp Speed, this is because of President Trump’s leadership that we’re about to have a vaccine that’s distributed widely. But in that first CARES Act, we were able to put billions of dollars of funding in place specifically to fund the development, encouragement of a vaccine as well as the wide distribution. And the President used that to go and put the best minds in the world together, working with the best drug companies in the world. So, I am very encouraged by what has happened. Never before in the history of our country have we seen us go from virtually one year from a disease no one knew about to a vaccine about to be distributed widely and approved by the FDA.”

On the universal agreement to extend PPP funding:

“With that said, we’re trying to finalize the differences that we have. You know, Speaker Pelosi has been trying to give hundreds of billions of dollars to states that had deficits before COVID, to bailout those states for things that are unrelated to COVID. We’ve been holding off on that. We’ve been trying to get relief for small businesses. I think that’s the area where there is universal agreement. I wish we could do something specifically on that while we disagree on the other items. And so, that’s where it stands right now.”

On the immediate need for relief for small businesses:

“That’s come on the table more recently as a new item that we can try to work through. But I think it’s encouraging that at least those two items, I wish we would have been able to get the liability protection going back to the CARES Act where we started trying for that. But it has been one of these fights where the Democrats didn’t want that, they did want the state and local [funding]. So, by Senator Mitch McConnell saying that both of those items will be set on the side, it is encouraging that it shows at least in the Senate they’re going to try to work through the things we do have agreement on, because there are a number. And the most important is the relief to small businesses and the millions of jobs that are tied as we see more and more small businesses just being crushed every day. We want those businesses to stay afloat and those jobs to stay afloat. Let’s give them the relief now while there’s agreement and then work on the other items.”