WASHINGTON, D.C. — House Republican Whip Steve Scalise (R-La.) joined Fox News Channel’s The Ingraham Angle last night to discuss how voters from across the country rejected Democrats’ socialist and anti-parent policies. Whip Scalise emphasized that voters were furious with President Biden and Speaker Pelosi for prioritizing their radical left base instead of the needs of struggling American families, workers, and small businesses. In addition, Whip Scalise emphasized that Democrats should abandon their far-left tax-and-spending spree and, instead, fix their self-made border, inflation, supply chain, energy, and national security crises. Whip Scalise praised parents for sending a clear message that they are the ones in control of their children’s education. 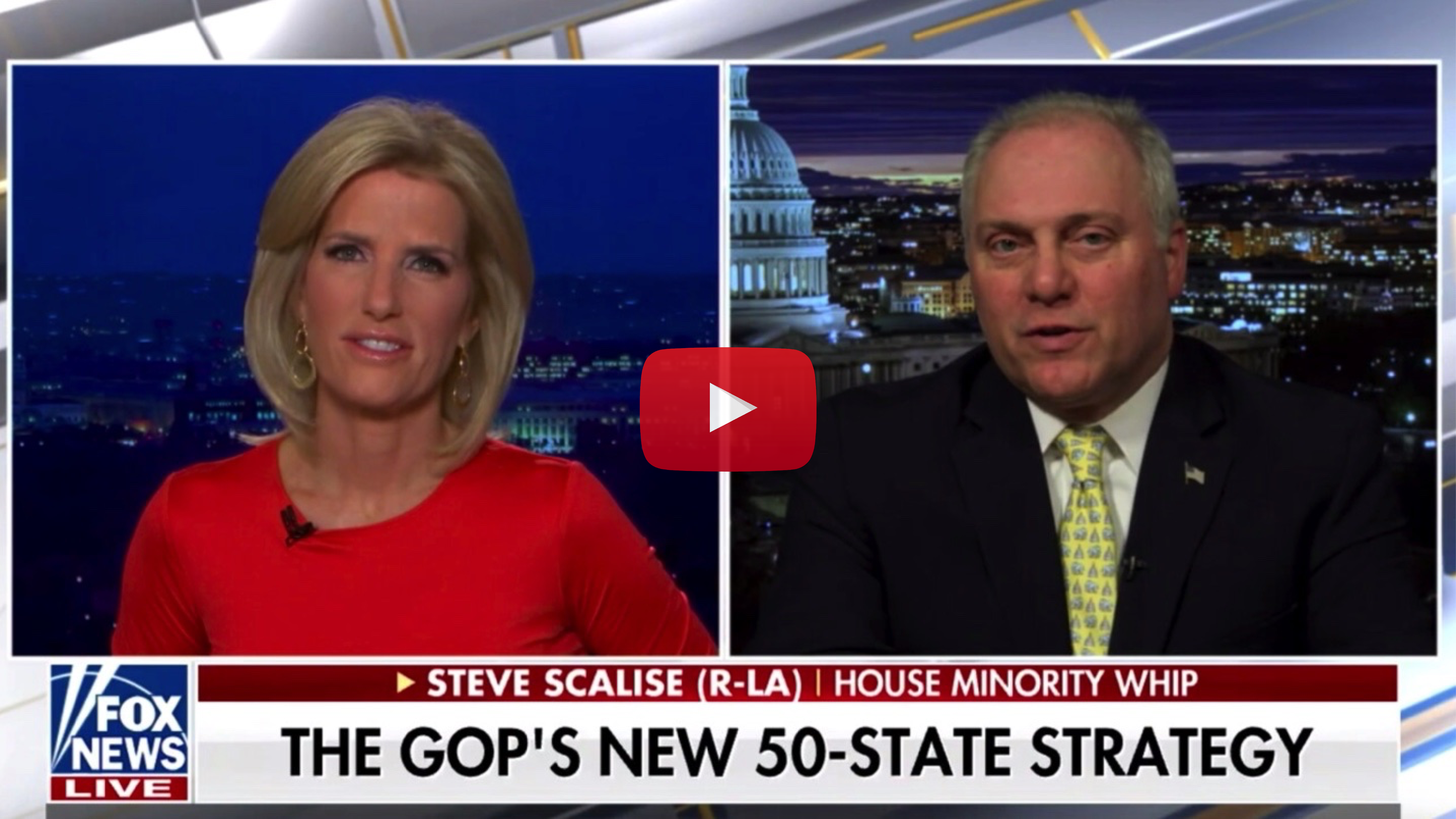 Click here or on the image above to watch the interview.
On voters rejecting the Democrats’ agenda:
“Well, last night, Joe Biden won by 10 points in Virginia, and he lost by two points last night. Make no mistake, Joe Biden’s agenda was on the ballot last night. There were a lot of things that were rejected by the voters last night. Big government socialism was the biggest thing voters rejected. They also rejected Critical Race Theory. Defunding the police was rejected. The idea that union bosses are more important than parents and [their] kids’ education – that was rejected by the voters too. And so, if you’re a Democrat, not just in the states, like Virginia and New Jersey, any district in the country, if Joe Biden won by 10 or 12 points, those districts weren’t Republican. And by the way, they can’t bring Joe Biden because Terry McAuliffe brought out all the big guns, all the leftist, all the radicals. Kamala Harris might have said it best, Laura, when she said, ‘What happens in Virginia is ultimately going to be what happens in 2022 and 2024.’ So how about that?”

On Democrats’ doubling down on their failed policies after their agenda was rejected by the American people:

“They keep doubling down on the failures that the voters last night said in blue states, these weren’t swing states, purple states, these were hard blue states like New Jersey and Virginia, where voters said enough of the spending. Quite frankly, the spending is what’s leading to the inflation [crisis.] And their answer is today to try to go back and pass this crazy multi-trillion-dollar bill to pay people not to work, to tax people. There’s [a] natural gas tax in their bill, that taxes low-income families, middle-income families, [tax] them to then give $450,000 checks to people who came in illegally.”

On the Biden Justice Department wanting to give $450,000 to illegal immigrants and comparing parent protests to domestic terrorists:

“That’s his Justice Department that’s negotiating that. The same Justice Department, by the way, that was going after parents saying that they’re domestic terrorists if they go to the school board meeting to say, ‘Stop teaching your kids to hate America.’

“And Merrick Garland, who they said would be a moderate on the Supreme Court – what a joke that is – Merrick Garland still won’t resend that order because they want to go down the far-left, big government socialist path. The voters don’t want it.”