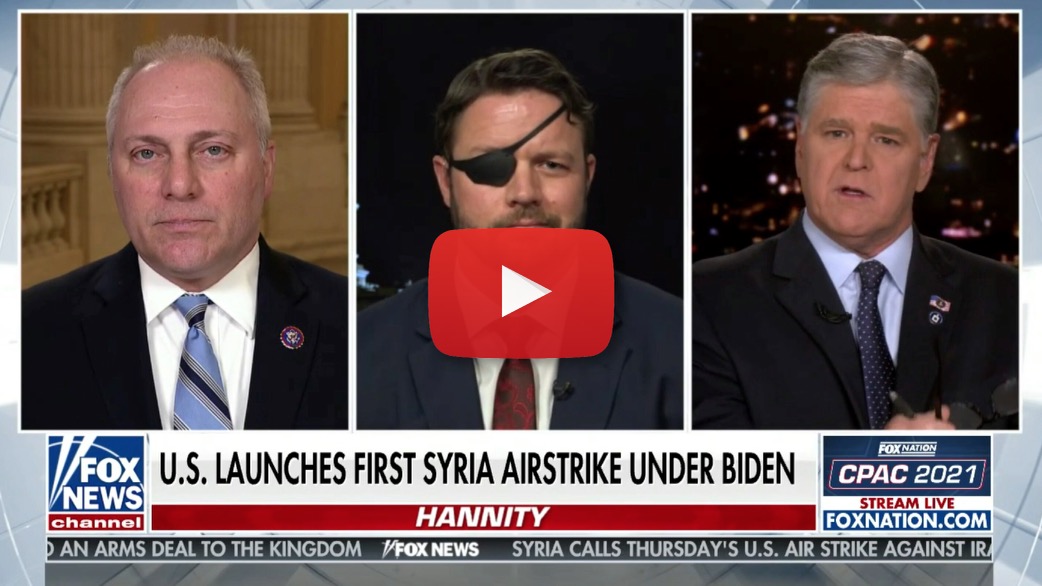 On President Biden’s airstrikes in Syria:

“I agree that, in the end, let’s see where the facts are on this strike, but it was the right thing to do to send a message to Iran who backs terrorism all the time around the world. President Trump led with peace through strength. It was a doctrine that actually worked to stand up for America and our allies again. But the whole time he was doing that, you had Joe Biden, Kamala Harris, Jen Psaki, all the ones you mentioned, who are critical of that, questioning whether it was erratic or the illegal authority. They were wrong then, hopefully, they are right now.

“But it’s this double standard. You see hypocrisy. Maybe the first 100 days of Joe Biden are defined by nothing but hypocrisy, whether it’s shutting down schools when the science says to open schools, they sidelined the scientist when they said they’d follow the science. You know, having John Kerry fly around the world on a private jet telling American energy workers that they had to go install solar panels.

“I think people are sick and tired of the hypocrisy but it’s on full display. Hopefully, they’re right here. Hopefully, he keeps a peace through strength mantra, but he also needs to recognize Iran is not our friend, don’t go back to dealing with Iran and giving them a pathway to a nuclear weapon. President Trump took the right steps by backing away from that deal. Let’s not lose ground.”

“And look, every president is tested at some point, and usually, it’s early in their presidency. I think when Donald Trump made it very clear, number one that, yeah, you weren’t sure where he was going to go, but a lot of our allies were worried he was going to pull out of NATO. What he did, he strengthened NATO by making sure our allies put up their own fair share.

“But he also sent a message to the Middle East and the rest of the world when he put the United States embassy in Jerusalem. And they were predicting, you knew that, they predicted there was going to be violence and there was going to be all kinds of wars on the Middle East. What do we get? We got peace agreements, Abraham Accords in the Middle East, because people recognize Donald Trump is a man of his word, he’s going to follow through. He believes peace through strength, but he rebuilt our military and it worked. There will be a test no doubt like every president that Joe Biden gets. I hope he stands up for America and our allies around the world when that day comes.”