WASHINGTON, D.C.—House Republican Whip Steve Scalise (R-La.) joined Fox News Channel’s America’s Newsroom to discuss Speaker Pelosi being forced to pull the FISA bill from the House Floor following widespread opposition from House Republicans and President Trump. Whip Scalise discussed the importance of the FISA Court to our national security, but emphasized that it must be reformed to prevent the same type of abuses that took place against President Trump and his campaign. 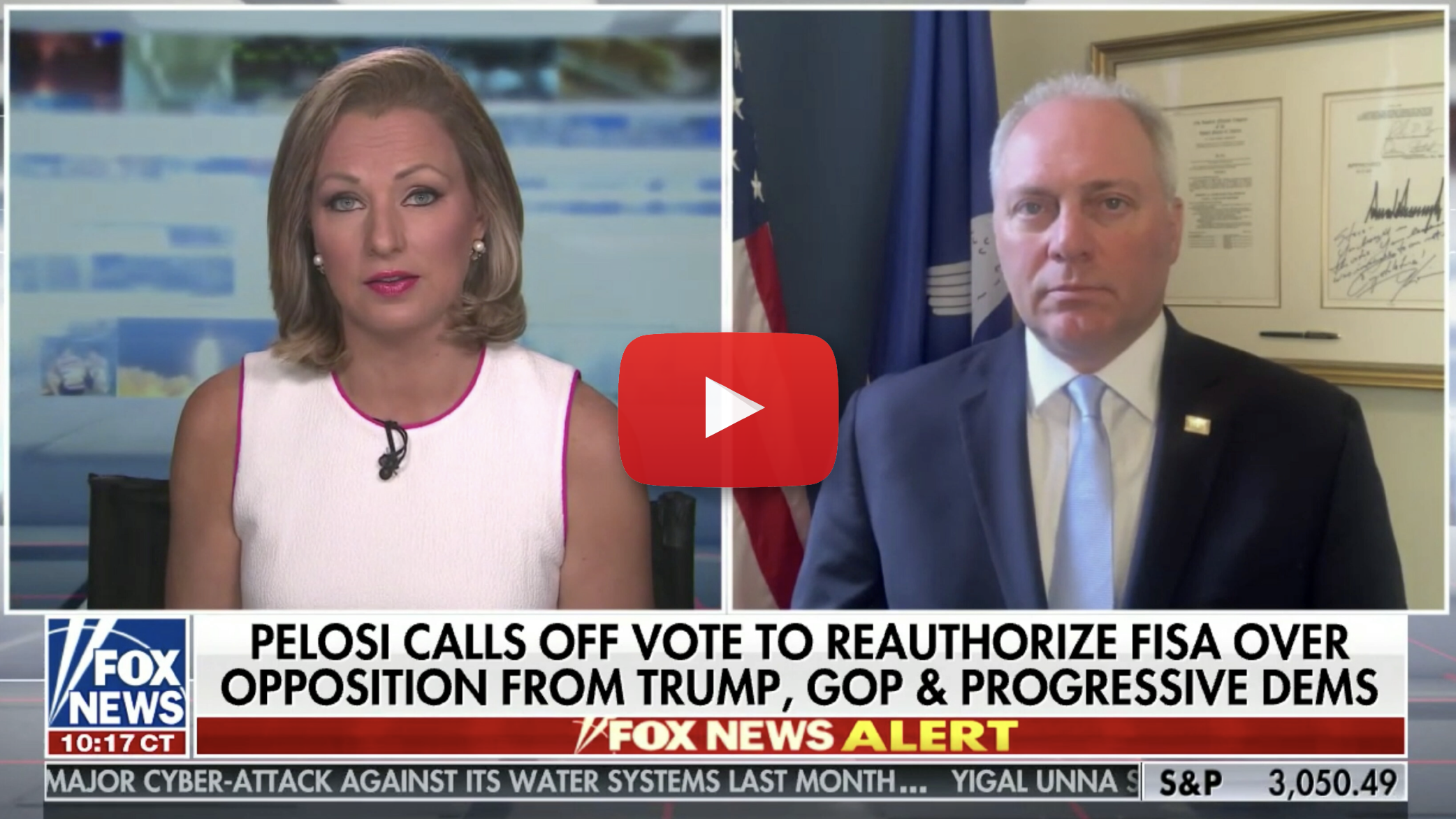 On Speaker Pelosi being forced to pull the FISA bill from the House Floor following widespread opposition:

“[The FISA] bill is an important tool in our national security, but it was heavily abused. You know, President Trump is talking about this, a lot of our Members going back to Devin Nunes have been pointing out the abuses of the FISA Court, which means there are some dirty cops who broke the law and there has been no accountability yet. Look, we’ve been calling for a long time on real accountability, on getting all the facts out. We haven’t seen all the facts yet, and I think the American people deserve to know how this law is important but was abused and that it’s not going to happen again. And so, until we can get that assurance this bill was not ready for primetime. I whipped against it yesterday morning and our Members came together by and large to recognize that whether you agree or disagree with the FISA Court, it was abused by people that were trying to literally start a coup against a candidate for President of the United States and Donald Trump. Regardless of who they went after, they shouldn’t have gone after anybody. This court should not be abused to try to take down a candidate for President that some people over at the FBI disagreed with.”

On the need to reform the FISA process to hold bad actors accountable and prevent future abuse:

“Well clearly, there’s more work that needs to be done but there are more facts that need to come out. We need to know everything about how this law was abused. Again, it’s a tool that is important for national security, but it’s a court where only one side presents a case and if that’s the way it works then that means the people presenting that case need to be honest and forthright, and some were not. Clearly, you know, most people over there are good people who do the right thing, but some violated their trust with the American public and there’s yet to be accountability. That needs to happen so that the people that are over there now that abused this court are not around anymore to abuse it in the future. And so, there needs to be reforms, it needs to be worked out and it wasn’t ready to pass yesterday.”

“I agree with [Majority Leader Steny Hoyer] that the people of Maryland elected him to represent them. They didn’t elect him to have him give his card to Nancy Pelosi, and yet, that’s what 71 Democrats did yesterday. They decided not to show up for work when the vast majority of us were able to get here safely, and we’ve gotten here before with over 380 Members showing up to work during this pandemic, and yet 71 of them phoned it in. I don’t know if they took their pay while they said they didn’t want to show up for work. We saw some of them said, in a signed document, that they couldn’t be here for health reasons and yet they went to the space launch in Florida. My goodness, I mean, if you can’t even be honest on that form that you couldn’t vote here. But look, we ought to be showing up to work and if somebody can’t get here for some health reason, that happens all the time, but to break 240 years of history where we’ve always, even during the Spanish Flu, Members of Congress showed up here to work. They didn’t have airplanes or cars, they had to come here on horses and buggies and they figured out a way to get here and do their job. There’s no reason that you had 71 Members that chose not to come here when other people were able to get here from all around the nation.”