Whip Scalise emphasized the need to focus on both economic and personal health as we consider ways to restart our economy and get back to work in a safer, smarter manner. 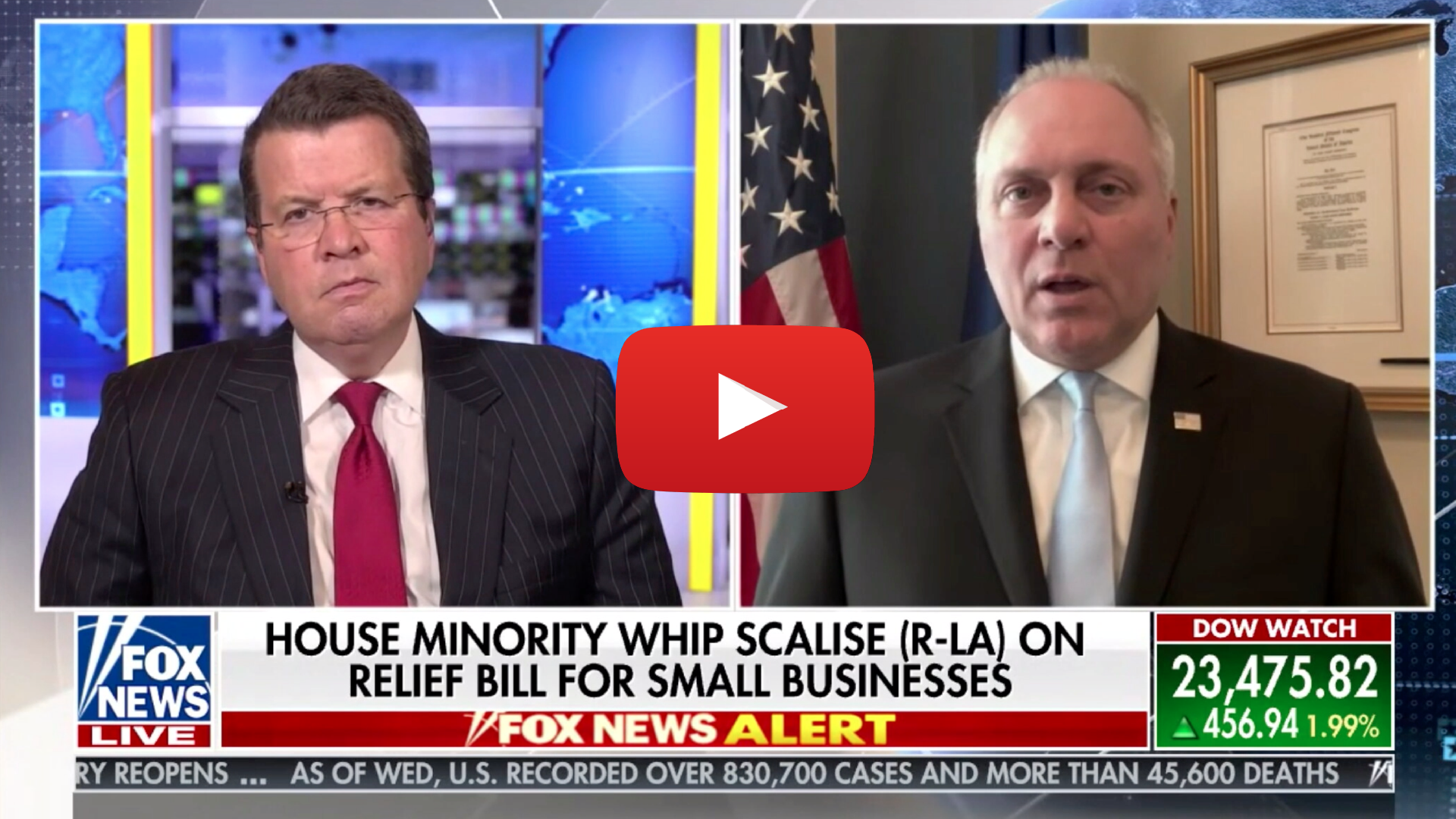 On the House voting to replenish the Paycheck Protection Program:

“Neil, this is going to pass tomorrow overwhelmingly. And, look, the Paycheck Protection Program has been incredibly successful. It’s been a lifeline to millions of workers out there. And I know Secretary Mnuchin estimates over 30 million workers are still on the job today that would have been unemployed, if not for this Paycheck Protection Program. It’s why President Trump pushed Congress weeks ago to put more money in it. We were pushing for that as well. And I know Speaker Pelosi played some games with it. I think, frankly, she got shamed into realizing you can’t play games with this program that’s a lifeline to our small businesses and the millions of people that they employ. So, it will pass overwhelmingly tomorrow.”

On reopening our economy with a focus on protecting economic and personal health:

“There are now trillions of dollars that are out there, in addition to what the Fed has been doing to put trillions more dollars into liquidity throughout our financial institutions, so that there is solvency, so that you don’t see massive bankruptcies. But at some point, you’ve got to let this work. You’ve got to, in fact, let and encourage people to start thinking about getting back to work in a safer way, not a trade-off, Neil, between safety and economic health. You have to do both. You can be safer as you look at how people are doing it, whether it’s in grocery stores. They’re going to be thinking about it in restaurants and other retail establishments. People want to get back to work. They want to be safe about it. They’re not going to be risky about it.

“But, at the same time, you can’t just keep thinking you can shut the economy down for another month or two. You saw what happened in the energy industry. You see what’s happening in the [agriculture] industry. You have major industries in this country on the verge of collapse if we keep doing this, because supply chains are breaking down. They weren’t built to have an entire economy shut down for months on end. So, you’re seeing medicine advance. We need to get smarter about social distancing and washing our hands, things like that. But people have to start getting back to work and getting the economy going again.”

On blue state governors seeking bailouts for their states:

“Well, first of all, nobody’s leaving anybody on the beach [as Governor Murphy of New Jersey said]. And, in fact, that’s why, tomorrow, you’re going to see Congress come back again, historically, to pass a fourth major relief package in less than two months, fourth. And we’re talking, again, trillions of dollars of money that have been spent to rescue our families, our small businesses, our hospitals, and, in fact, our states can get money as well.

“I know the Governor of New Jersey is going to see billions of dollars come in his coffers because of the package that we passed just a few weeks ago. However, Neil, and this is the important point, states like New Jersey were in dire financial straits prior to COVID-19. This isn’t some new experience for some of these large states. And it’s really high-tax states that were seeing their economic base erode. I mean, New Jersey, businesses were fleeing the state. And, frankly, a lot of their citizens were fleeing the states, like Florida, who had no income tax well before COVID-19.

“So, to try to think that you can kind of mask problems you had before and blame it on COVID-19 and think you’re going to get a federal bailout, that’s, I think, where Senator McConnell was talking about, is that we’re trying to help states who are reeling because of this crisis, but don’t try to roll in your previous crisis that you created because of high taxes and really bad policies that were running, literally running businesses and families out of your state. And we know those states, by the way, where that was happening. You could just look at the numbers. They don’t lie. And those states had problems prior to this. We’re helping families and businesses get through this in every state. And a state like New Jersey is probably benefiting more than most right now.”