WASHINGTON, D.C.— Majority Whip Steve Scalise (R-LA) joined Fox Business Network’s “Varney & Co.” today and discussed the broad support across the House Republican conference for their American Health Care Act to repeal and replace Obamacare, noting that every Freedom Caucus member on the Ways and Means and Energy and Commerce Committees voted for the bill during its markup. Scalise also noted the major conservative reforms achieved in this bill, as confirmed by the CBO, including reducing taxes, cutting the deficit, lowering premiums, and increasing choice for families and businesses. 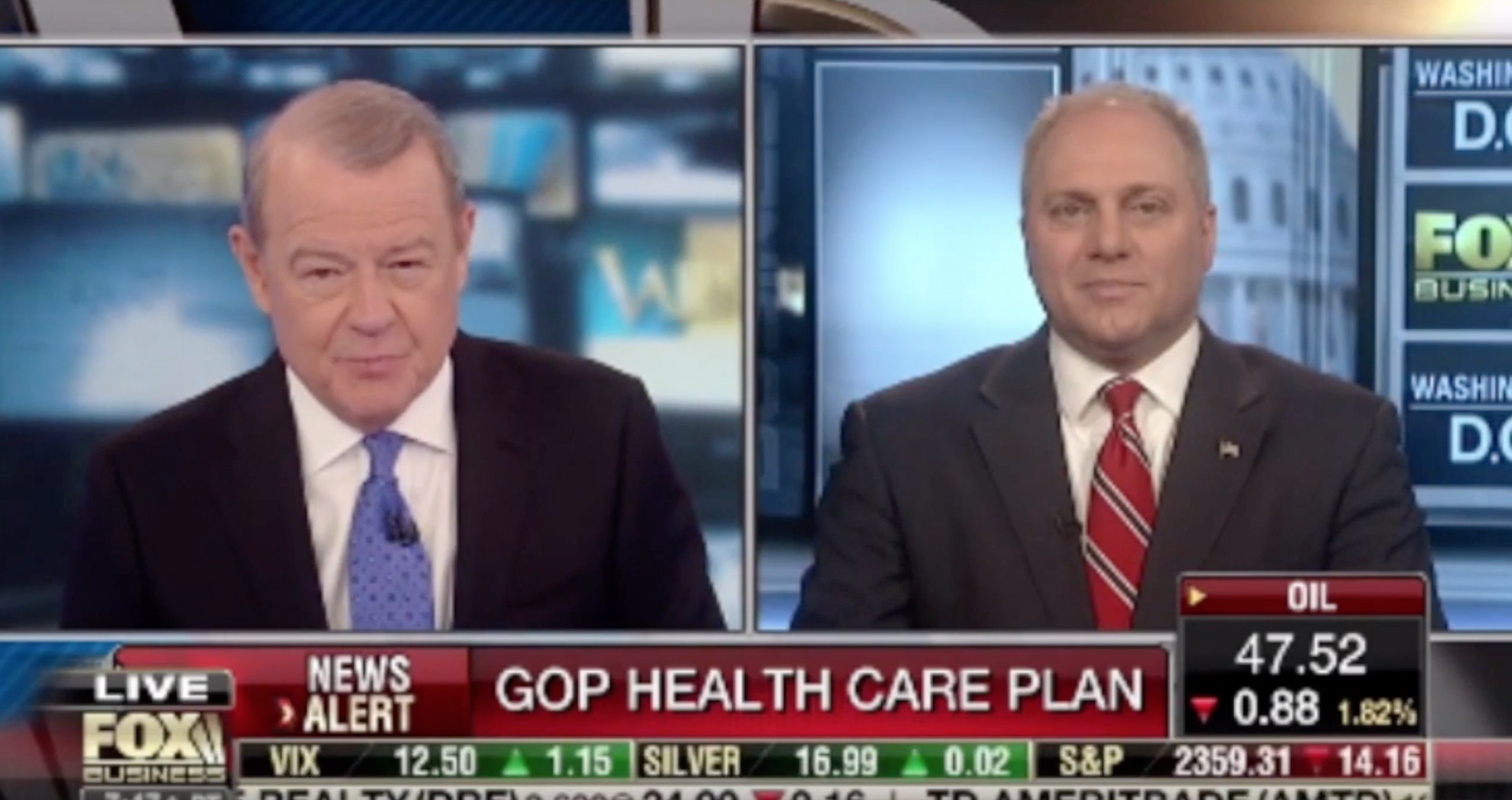 Click here or on the image above to watch the full interview.
On conservative support for the bill:

“We’ve been meeting with all of the different caucuses within our conference for weeks now. In fact, if you look at the bill that we got out of committee last week—I was on the Energy and Commerce Committee—27 hours we debated that bill, took amendments, andevery Freedom Caucus member on that committee voted for the bill to move it forward. We’re very close on the differences where some people might have a different way they want to do things, but the CBO score actually confirms the big items in our bill. It lowers costs, it lowers the deficit, and it cuts taxes.”

On the history of conservative support for tax credits:

“Conservatives for years have had the tax credits in different bills that they have had from Jim DeMint to Tom Price before he was HHS secretary, to Rand Paul—he’s got refundable tax credits in his bill. At the end of the day, what we want to do first give individuals freedom in health care so they can choose their own plan. That’s front and center in our bill. We do a number of other things, but Medicaid reform is a big part of our bill too. But helping low-income families to be able to buy the plan of their choice if they can’t get it through their company, through their employer, that’s really the heart of the tax credit and helps people be able to go buy the plan they want.”

On the CBO estimate:

“We’re also setting up the ability for states to do high-risk pools for people with preexisting conditions as well. That’s something that will dramatic help lower costs. So, our big focus was giving families the freedom to choose their own plan, lowering costs which is the opposite of Obamacare where you have increasing costs. Again, lowering the deficit, being able to make sure that people can buy whatever they want, those are all parts of our bill, but there’s a lot more that’s going to be done in stages two and three where Secretary of HHS Price has broad authority to do even more things that will lower cost that CBO can’t factor in. But when you look at the CBO report, it actually helps bolster our argument, because it shows we’re going to lower costs. But even when they say 14 million people will lose coverage, those aren’t people losing coverage; those are people that are choosing not to be on Obamacare. That’s not lost coverage—that’s freedom in health care.”