WASHINGTON, D.C.— House Majority Whip Steve Scalise (R-La.) joined Fox Business Network’s Mornings with Maria this morning to discuss the Congress’s intention to pass the reconciled Tax Cuts and Jobs Act within the next two weeks. Additionally, the Whip praised President Trump’s announcement on recognizing Jerusalem as the capital of Israel, and spoke about the Democrats’ threats to shutdown the government and refusal give a pay raise to our troops. 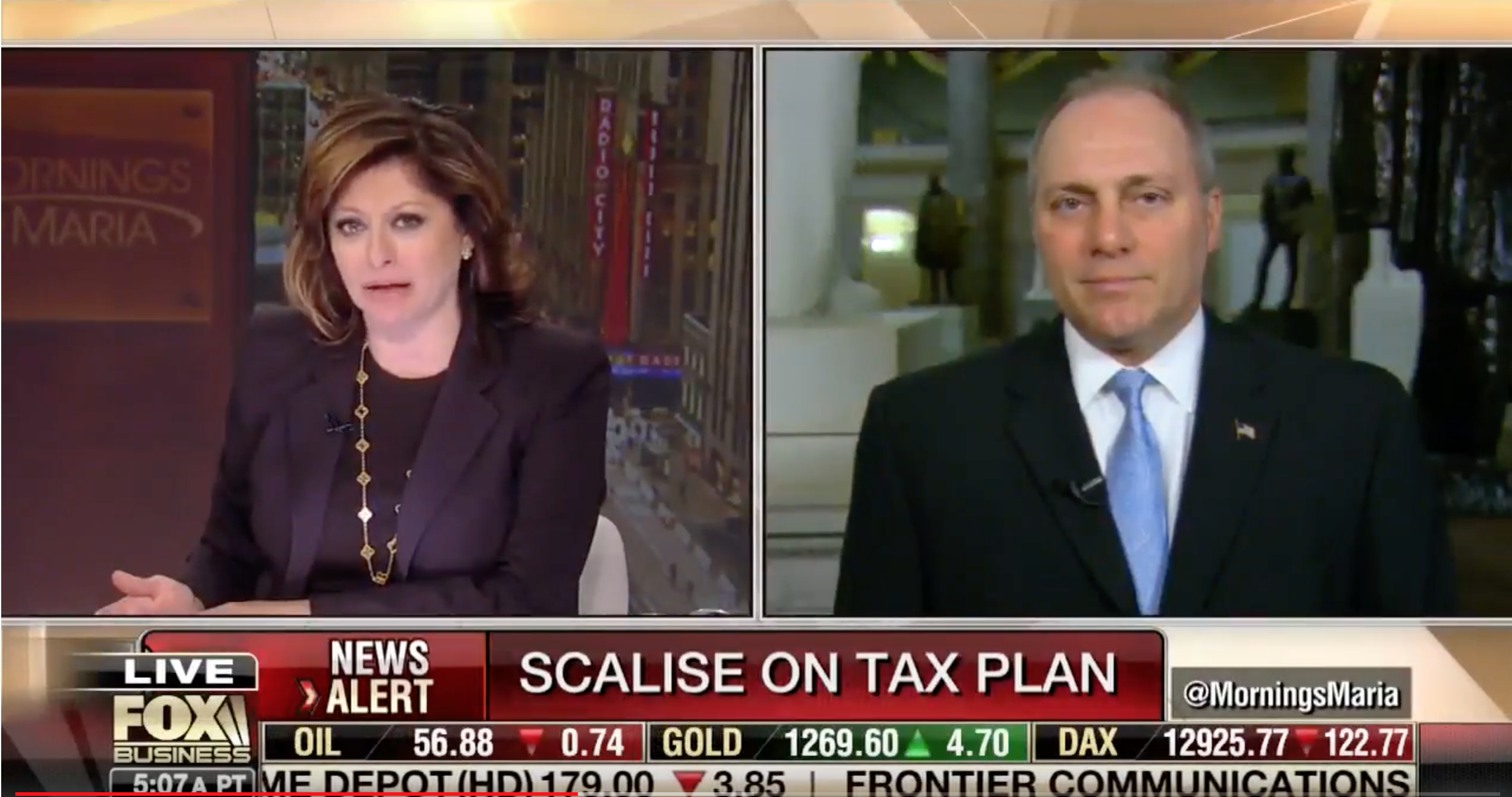 Click here or on the image above to see his full interview.

On President Trump’s announcement recognizing Jerusalem as the capital of Israel:

“I think if you look at a lot of the success we’ve had at bringing our allies together, that’s been from the leadership of President Trump. He doesn’t get enough credit for it, but we had eight years of Barack Obama cutting deals with Iran, isolating our ally Israel and it really did cause a weakening of the relationship, and I think the ability to get peace because if you’re tilting the scale in favor of Palestinians at the expense of Israel, that set us back. President Trump has reset that and I think shown he is willing to back up our allies, and in this case, enforce the law—the federal law for over 20 years that has said that the capital of Israel is Jerusalem. Obviously, it’s ben in Tel Aviv—the embassy has been—but this is something the President has been talking about, and you know, the fact that he’d be criticized for following through on campaign promises I think makes people wonder what the motivations are, but when a terrorist organization like Hamas is criticizing it, that maybe he’s on the right track.

“They’ve had days of rage for years and years and we haven’t gotten peace. So, the fact, again, you’ve got the President of the United States, Donald Trump, saying, ‘we’re going to support and back our friend Israel,’ and our other friends all around the Middle East look at that and say, ‘finally, [the U.S.] has a President who is willing to back [their] friends, and maybe stand up for what’s right in the world.’ I think that gives us a better chance to get peace, when you’re not willing to roll over and let terrorist organizations dictate the terms.”

On why Americans will like and benefit from tax reform:

“People I’ve talked to like the plan, because they realize that the middle class is going to get a great tax cut and it’s going to boost the economy. Depending how you ask the question—and I haven’t seen the question they asked there—if you look at the media reports, what you hear Democrats in Congress say is that it’s going to be a lot of things that it is not. All that they’re doing is opposing tax cuts for middle-class and hard-working families. So, when you look at what our plan does, everybody that’s actually done estimates on it will say average families are going to see about $1,200 back in their pockets. You’re going to see economic growth. We’re going to bring jobs back to America. You know all of us have complained when you see big companies moving good jobs—thousands of jobs at a time—to foreign countries. We’re doing something about it in our bill, and people when you tell them about that, they really like that feature. When you find out that over 90% of Americans can do their taxes on a postcard because we simplify the code, people really like that. So, you know, education really helps a lot. I go out and talk about it in my district, and people love the things that they hear. They just haven’t heard it in the mainstream press.”

On working through the differences between the House and Senate version in the conference committee:

“In the House version, we repeal the alternative minimum tax, just one more thing that just makes it harder for businesses to grow. They’re going to work out those differences in conference. We are looking at trying to do some other things, maybe lowering the top rate more, helping our small businesses even more. We do a lot to help small businesses in our bill; we can do more to make that even better. When you see the kind of economic growth we’re going to get from this bill after eight years of stagnation and slow growth, I think people were just accustomed to that being the best we can do, and we can do a lot better. You’re already seeing a lot of optimism out there, and I think you’re going to see a lot more job creation. Again, wage growth that we haven’t seen in a long time and once that happens people are going to be real happy with what they see.”

“I think they’re looking at all of that in the conference committee. Obviously, the differences between the House and Senate you can go look at. But even things like the individual mandate repeal that was in the Senate version—we’ve repealed the individual mandate in the House many times. Something like that could be in a final version too. We have some differences on the death tax. I’d like to see a full repeal of the death tax; the Senate’s got a different take on it. Let’s get these final differences worked out, but the big things that we already agree upon are I think what’s most important to the economy, and that’s lowering rates, making the country competitive again. And the biggest point of this all is that we’ve had a President in Donald Trump who [has] led the charge on this. He’s said, ‘I want to rebuild our middle-class. I want to bring jobs back to America and make us competitive.’ He’s really been incredibly helpful, and the Vice President, in making sure that we can get the votes to pass it through the House. He was very engaged in the Senate too. We’ve got one step left. We’re on the one-yard line. We’re going to push this thing in the next two weeks.”

On states with high state and local income taxes:

“You’ve already had a dramatic mobility away from those states. Just go to Florida, go to Texas. In Texas, you’ll see a bunch of high-income people and businesses that moved out of California. In Florida, you’ll see the same thing from New York’s high taxes. States with high taxes have already really been really decimating their economies and running off a lot of the job creators that you’d want to keep. It might continue, but the bottom line is people are going to get tax cuts under this bill, and across the board. That is what is most important, and that’s going to get our economy moving again. We were so used to less than 2% growth under Barack Obama, 1.8% growth was a good day for some people. We’re already well over 2%, 3%. If you break 4% growth on a regular basis, what that means to families that have been working hard and struggling to finally see wage growth, finally see more money in their paychecks, that’s going to be a really big win for our economy.”

On the possibility of lowering the top individual rate:

“The bill allows for $1.5 trillion in tax cuts, which is unbelievably dramatic, Reagan Revolution kind of stuff that we’re talking about. So, if you lower the top rate to some level below 39.6%, then ultimately they’ve got to find another way to make up for that money.

“That’s what the conference committee is working on right now, they’ve got ideas, but until they come up with something that works best for the economy for hard-working families, let’s let them continue to do the work. The fact that they’re trying to lower that rate I think is good for everybody, including the folks you’re talking about in high-tax states and I work real closely with my colleagues in New York and New Jersey, and California and Illinois that have been trying to fix this problem even more, and I think you’re going to see a big win for families at every income level, and that’s what we’re trying to achieve: fairness across the board. Everyone should be a winner from this and it will be if you look at what’s going to happen in the economy.”

On whether there will be a government shutdown:

“No, this week we’re looking at bringing a short-term spending bill. It’s not a long-term agreement I’d like to get. I’d like to see real certainty for our Defense Department and a pay raise for our troops. The fact that you’ve got some liberals around here that don’t even want to give certainty to our troops is a shame, but we’re going to keep working through this.”