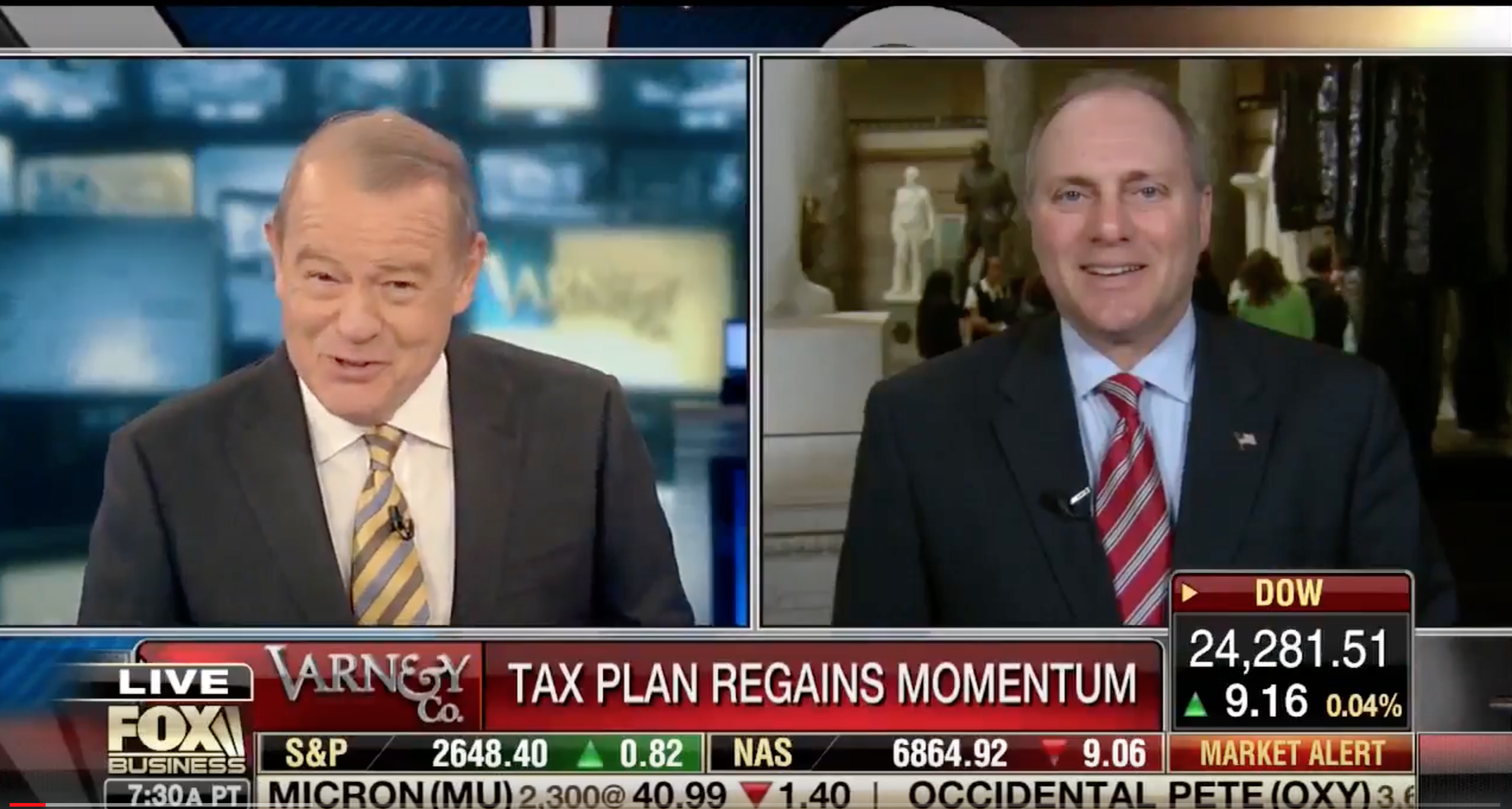 Click here or on the image above to see the full interview.

On moving the bill through the Senate and to a conference committee:

“I’m encouraging my Senate colleagues to pass the bill today and I think they will get to 50 votes, Vice President Pence can break the tie, and on Monday we’re going to come back in the House and send that bill to a conference committee. I was with Chairman Kevin Brady this morning—the Chairman of the Ways and Means Committee—and he’s already working on some of the things where we have differences between the House and Senate that we need to work out, but we both are in agreement—House and Senate—that we need to lower tax rates across the board, we need to make our corporate rate competitive, we are working very closely with President Trump because ultimately this is a bill, we want him to be able to sign by the end of the year. What a great Christmas present what would be to families that are working hard out there that want more money in their paychecks, and they want to see jobs come back to America.”

On having the bill passed by the end of the year:

“Stuart, that’s been our goal from the beginning and if you look at the timetable we are right on track to do that. Let the Senate get this work through. Whatever their bill ultimately does, a lot of the key components are in the bill, there are some differences we need to work out Monday night; the House will vote to go to conference committee and then that work is already underway on how to resolve those differences, so we can get a bill on President Trump’s desk to get this economy moving again.”

On ensuring a competitive corporate rate:

“If you look at what we passed out of the House, it is a 20% rate in the House version and I have heard some of those potential options that the Senate is looking at to go higher, but we want a 20% rate. We don’t want to just be average with the rest of the world; we’re right now the highest in the industrialized world and it’s killing jobs, it’s moving jobs overseas. If we want to bring those jobs back, let’s jump ahead of everybody else and be the world leader again, and we can do that. Our bill in the House does it; we’ll work out those differences in conference.”

On the need to have this bill signed into law:

“Stuart, I’ve said from the beginning we’ll get this done, we’ve met every one of our objectives along the way. We have to get this done, Stuart, for the American people who want to have more money in their pockets and they want to see the economy moving. For eight years we had stagnant economy under President Obama. You’re seeing the markets go up, you’re seeing an uptick based on anticipation of us passing the bill. We have to pass this bill and do it by the end of the year so that President Trump can really go lead the charge at continuing to get the economy moving and making America great again.”