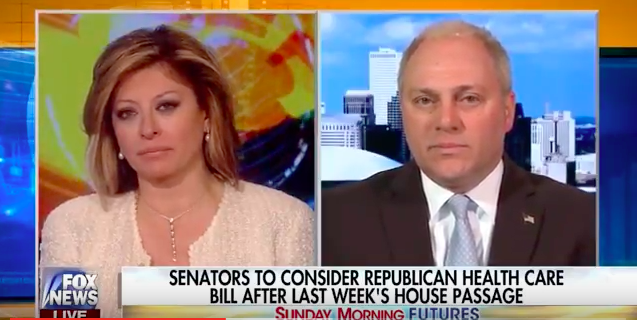 On next steps for AHCA and the important reforms it implements:

“Senators have been having their own task force put together. I‘ve been talking to Senate Majority Whip John Cornyn and they’re focused on doing the things they need to do to pass the bill out of their chamber. And look, what we sent them is a really good bill that focuses on some main important points. One is lowering premiums for families that are struggling under Obamacare. Another is to let people actually have control of their own health care decisions, and we made extra care with multiple layers of protection that people with pre-existing conditions are protected. And I just want to make this point on that: no matter what kind of plan you have today, if you have a pre-existing condition, under our bill, you cannot be denied coverage, and you cannot be charged more than anybody else. Those are provisions in our bill, those can’t even be waived by a governor if a governor wants more flexibility. But it’s a good bill that focuses on lowering costs, and look, Obamacare is failing. We are seeing even more examples; in Maryland some counties are going to be facing over 50% increases, Iowa’s market has collapsed. This law is not working. The bill we passed over to the Senate is a really good bill and I hope they can make it better because putting that coalition together is complicated. It was complicated in the House, but the House came together because we wanted to fulfill that promise we made to the American people, and we did.”

On the protections for people with pre-existing conditions in the bill:

“There were two things that were added along the way to specifically put more money into the areas for people with pre-existing conditions so their premiums can come down. Because, look, Obamacare says you can’t be charged more if you have a pre-existing condition, but the problem is the costs are too high for everybody and the real story for people with pre-existing conditions in Obamacare are the deductibles; if you’re paying a $12,000 deductible, that really almost impedes your ability to use health care because everything that you do, you are paying out of pocket even though you have expensive insurance. In our bill we actually put $8 billion in–that was the final change we made to the bill–specifically focused on people that just got out of the insurance marketplace altogether, but have a pre-existing condition and want to get back in and want to buy at normal, competitive rates like everybody else. We put specific money to help them get back in the insurance marketplace at affordable rates so that everybody’s premiums can be lower.”

On potential changes to the bill in the Senate:

“That’s going to be up to Senate. I think what they’ll find is I’ve heard a lot of really good ideas by different Senators–there were some really good ideas that House members had that, number one, didn’t fit the definition of budget reconciliation, like buying insurance across state lines. We want to do that too, but that would have made this a 60-vote bill in the Senate as opposed to a 51-vote bill. So I’d encourage the Senate to add as many things as they can, but the main thing they’re going to find too is that anytime you add something to one end maybe to please moderates, some of the more conservative members might not like that, so you have to find the balance. You have to thread the needle. We did that, it was delicate, but all of our members got involved in figuring that out, and I hope they do the same. But our focus was on lowering premiums, and putting families back in charge of their health care. As long as the Senate follows that template, and, you know, they’ve got to figure out a way to get there and get 51 votes in the process, and we’ll be fine. And let’s get a bill on to President Trump’s desk to provide relief to families across the country who are struggling.”

On the House’s aggressive agenda:

“You know, we set an aggressive agenda because President Trump wants to get big things done, and frankly, I think he’s shown and proven in his actions already that he’s pushing hard to follow through on the promises he made and there are a lot of really good results: Neil Gorsuch is on the Supreme Court, the Keystone Pipeline is green-lighted. We’ve gotten the President 28 different bills onto his desk that he’s already signed into law to create jobs and to reduce the tax burden for families. But this is a key part–Obamacare repeal and replace and tax reform. We can walk and chew gum at the same time. We’re working on tax reform, the Senate of course is going to be taking up the health care bill, but we’re going to be doing all of them in conjunction. And hopefully by the end of the year, if you’ve got both of those things in place, you’re going to see the economy take off like we haven’t seen in decades. You’re going to see jobs being created and a middle class rebuilt in ways that we haven’t seen in a long time, and it’s a good thing that we’re pushing this agenda hard because families want this, this is what we campaigned on, and this is what Donald Trump and our majorities were elected on.”

On the Democrats’ unwillingness to work together with Republicans:

“You know, we reached out early to Democrats and they made it clear, they didn’t want to do anything that unraveled Obamacare, and that’s unfortunate because, again, you’re seeing Obamacare collapse all across the country, but I guess they’re more concerned about having that legacy item for Barack Obama as opposed to a law that actually works for families across the country. So we said, ‘okay, we’ll use the budget reconciliation process,’ because it allows us to do it with 51 votes versus 60. So in the end with tax reform we’re going to do the same thing, but if they want to play all of the old class warfare games and pit one group of Americans against another, we’re just not going to do that. Donald Trump doesn’t want to do that; he wants to unite people and actually lower tax rates for all people across America. And look, our plan is actually so simplified, you literally will be able to put your tax returns on a postcard. over 90% of families in America in our plan will be able to do their own tax returns on a postcard–something that’s real refreshing in terms of a reform to Washington and the old way of doing things that people have been hungry for for a long time.”

“Maria, as we’ve seen, nothing important that the country really wants us to do is easy, but it’s necessary. We said with health care, failure is not an option. and I think the same with tax reform, there’s a reason you haven’t had a major overhaul of the tax code since 1986. It’s complicated to do, but Kevin Brady, the Chairman of the Ways and Means Committee and their entire committee have been working hard for months on this. They didn’t just wait until health care got passed out of the House. They’ve literally been working for months to try to figure out the best way to do it, working now with the White House, and all of those questions you raised will be answered through the committee. But the main focus is on growing the economy, creating jobs, and getting people back to work that have been struggling under an economy that’s been growing at less than two percent over the last eight years. That’s unacceptable. We can do better, and we will do better with this pro-growth tax plan that simplifies the code.”