WASHINGTON, D.C. — Today, House Republican Whip Steve Scalise (R-La.) joined The Weather Channel’s America’s Morning Headquarters to discuss ongoing recovery efforts in Louisiana after Hurricane Ida. Whip Scalise emphasized that Hurricane Ida severely damaged Louisiana’s power grid and left over a million people without power for an undetermined amount of time. Whip Scalise noted that all the main feeder lines that supply the New Orleans region’s electricity went down during the hurricane. In addition, Whip Scalise talked about surveying Hurricane Ida’s damage with the Coast Guard and local leaders to better learn what is needed to help Louisianans recover from this natural disaster. 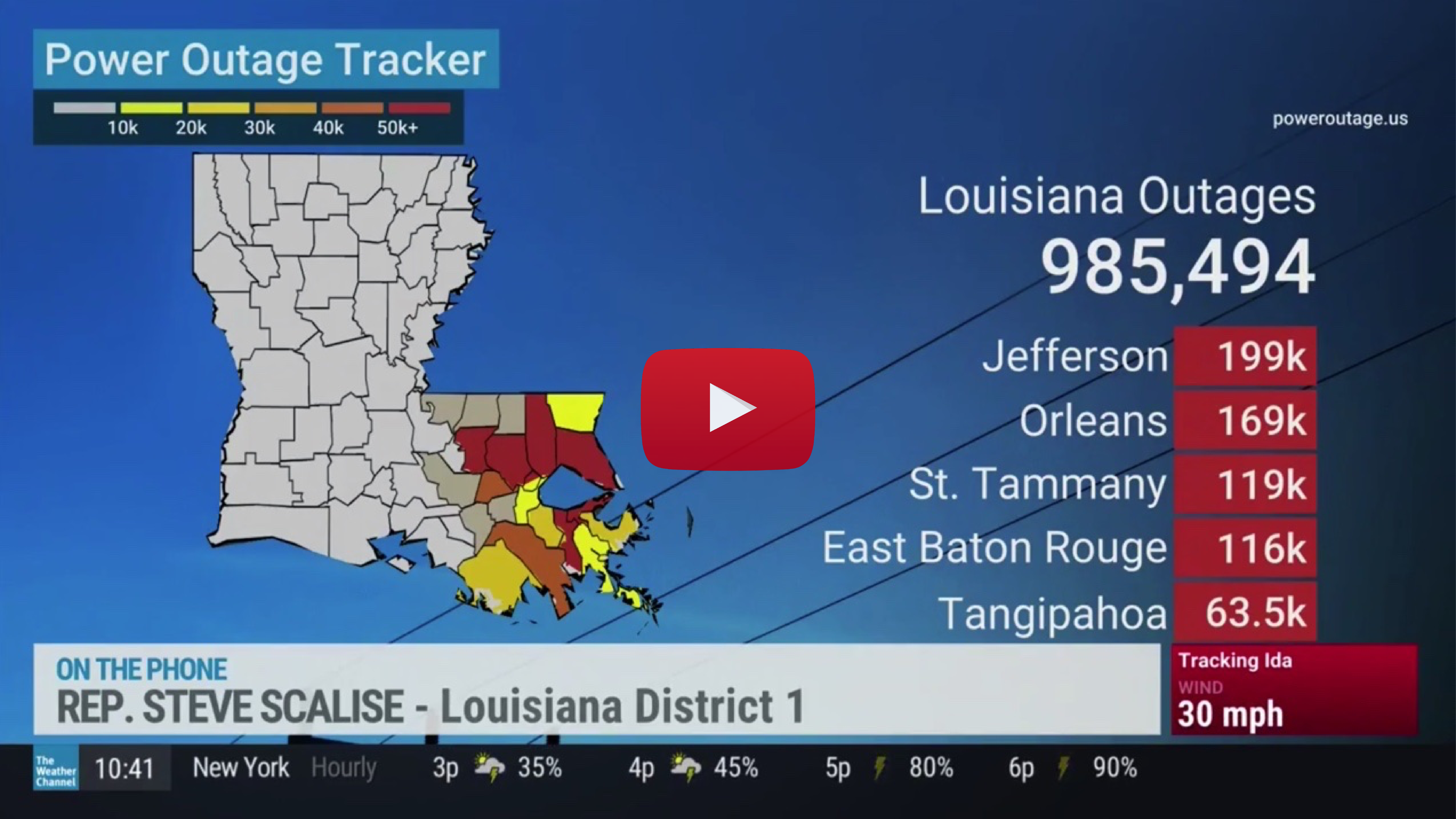 On the issues that Louisianans are facing after Hurricane Ida:

“Right now, the most pressing need is to get power supplied to a lot of the areas that were impacted. As you can imagine, when you see those winds – you know, Category Four and Category Three – sustained for hours through the whole New Orleans region, the entire power grid in the New Orleans area is down. They’re still assessing right now, but, you know, the communities are really having a tough time getting things back up and running because even the sewer systems aren’t functioning. So, a lot of people evacuated, but for even people who left or stayed behind, it’s not only that they, you know, [do not have the] ability to have air [conditioning] when it’s over a hundred degrees, it’s the inability, in some cases, to even have running water because the sewage and water systems are down. You know, the hospitals are pressed to their limits, but they do have backup power. They’ve got enough fuel to keep the hospitals going, but for a lot of the basic community services and, of course, for families, no power is a big issue. No ability to get fuel, even at gas stations, is making it hard for people to come in and get and assess [the] damage. So we’re working on all those fronts right now.”

“The main energy companies have said that they’re going to need probably another two days to do all assessments. But you know, in New Orleans, for example, there are eight main feeder lines that supply the grid for the entire New Orleans region, and all eight went down. One is a major power line that crosses the Mississippi River. The towers holding that line up collapsed during the storm. So the lines [are] actually in the Mississippi River. I’m not sure if every one of the eight lines is in [a] similar shape. So hopefully, they can get a few up and, with redundancies, get at least some power going as soon as possible. But, you know, it’s still hard to gauge when you don’t have an assessment from them. But, in the meantime, the local officials are still clearing debris from roads. I know I’ve gone out with the Coast Guard today with a few parish presidents to look at a number of the low-lying areas, especially in Port Fourchon where Ida made landfall and in Grand Isle, which is an island, but it’s kind of a frontline barrier of protection to knock storms down, but they took a devastating blow there. So, we’re going to, you know, we’re going to go down and help those leaders on the ground, find out what their needs are too.”