WASHINGTON, D.C.—House Republican Whip Steve Scalise (R-La.) joined Fox News Channel’s The Ingraham Angle to discuss how the Republican Party has become the party of the working class. Whip Scalise blasted Democrats for claiming to fight for hard-working families while supporting far-left liberal policies that would ship American jobs overseas and cause household energy costs to skyrocket, disproportionately hurting hard-working Americans the most. 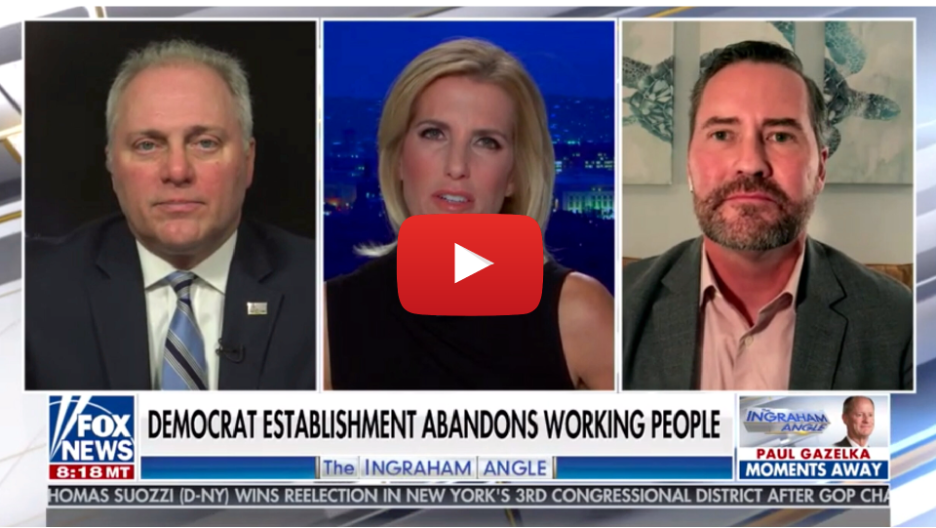 “Let’s talk about a different form of hypocrisy, and I think first of all the items you laid out are very important but let me add one to the list. And that is AOC should work with us on opposing America’s readmittance into the Paris Accord. Because think about this Laura, the Chinese Communist Party could not have drawn up a better plan to destroy the economies of Europe and America than the Paris Accord. First of all, there’s not one country in Europe in compliance and they exempt China until 2030. So, China literally gets to wreck economies in the United States, in Europe, take those jobs and, by the way, if you’re concerned about carbon emissions, China emits five times more carbon from making the same stuff we make in America because we actually have good environmental standards. Plus, what the Paris Accord would do would be to increase the cost of electricity for household families in America which, by the way, hits the lowest income people the hardest. It would destroy manufacturing jobs which are those blue-collar jobs you talked about. So, she should join us in standing up for workers, standing up for low-cost energy, and opposing the Paris Accord.”

On how the Republican Party has become the party of the working-class:

“They truly are and you can see that in so many of the swing states that we won. So many of the swing House districts where President Trump really did help us flip so many of the seats that we won in Congress because President Trump stood up for those hard-working men and women who Washington had left behind. Members of Congress and presidents from both parties were not looking out for those folks. President Trump was bringing those jobs back. President Trump, by the way, stood up to the bullies and the bullies are still around. China’s still there, Russia’s still there, Iran is still there, and if Joe Biden were to literally hand over the keys to the store again like he did when he was in the White House last time, it was Joe Biden and Barack Obama who gave Iran a nuclear weapon. That’s not the route that those blue-collar workers want to see us go.”