WASHINGTON, D.C.—House Republican Whip Steve Scalise (R-La.) spoke on the House Floor today ahead of a vote on Speaker Pelosi’s Continued Soviet-Style Impeachment Inquiry resolution. Whip Scalise blasted the resolution’s highly partisan structure and built-in veto authority for Democrat chairmen. Whip Scalise noted that Speaker Pelosi and her liberal lieutenants are proving Alexander Hamilton’s point when he worried “there will always be the greatest danger that the [impeachment] decision will be regulated more by the comparative strength of parties, than by the real demonstrations of innocence or guilt.”

Whip Scalise also lamented Democrats’ decision to waste the House’s time and resources on impeachment, while ignoring bipartisan solutions on prescription drug pricing, USMCA, and the humanitarian crisis on our southern border. 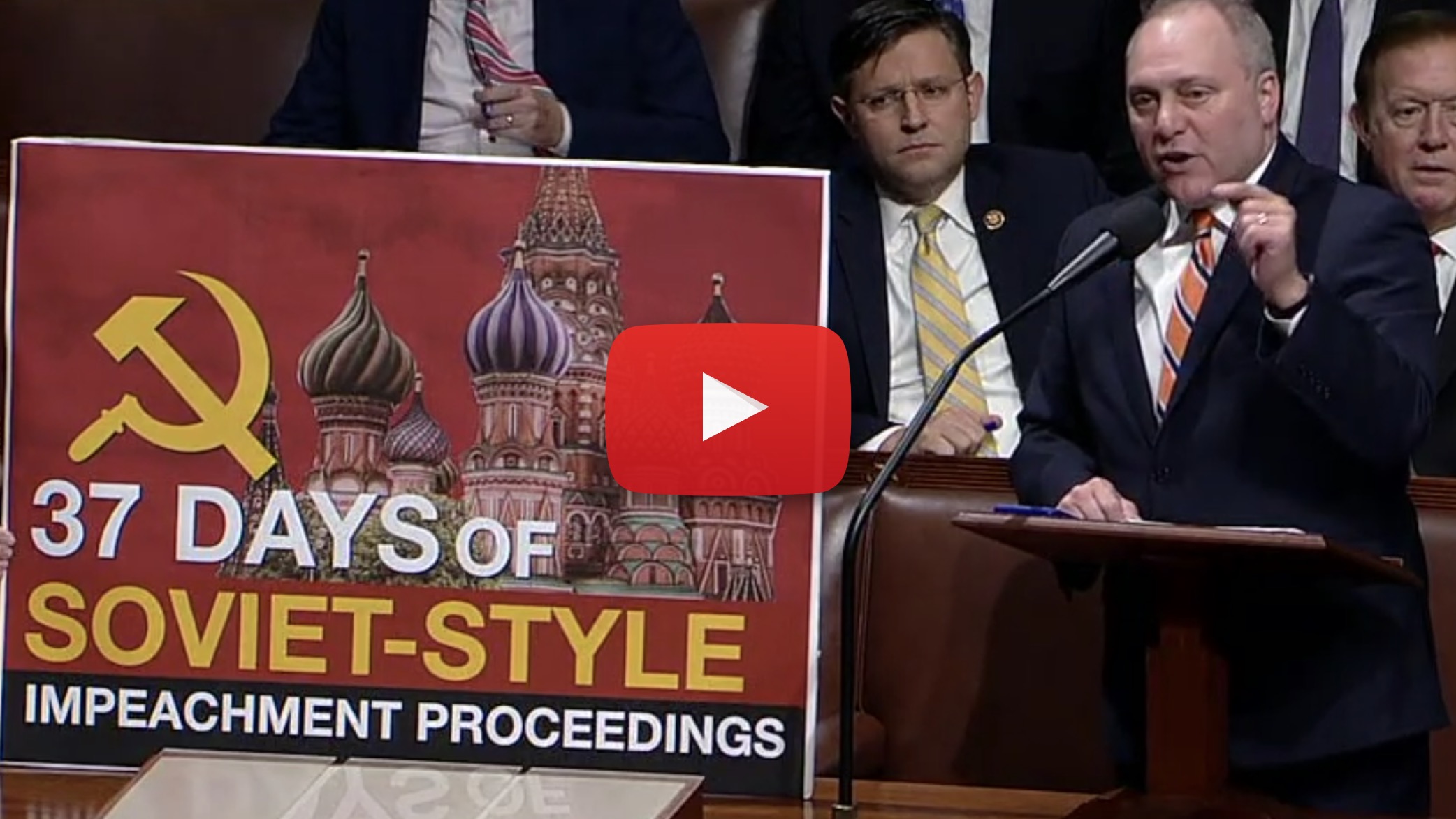 “…Madam Speaker, I rise in strong opposition to this resolution. Unfortunately, we’ve seen since the day that President Trump was inaugurated there have been some people that made it public that they wanted to impeach him. Not because there are high crimes and misdemeanors, which is the Constitutional standard, but just because they don’t agree with the results of the 2016 election. That, Madam Speaker is not why you impeach a President. There is precedent. This has only happened three times in the history of our country. Every time it not only started with a full vote of the House, but it also started with actual fairness. We’re not getting that fairness today.

“When you look through this resolution, in multiple places, it gives veto authority by the Chair to literally reject any witness that’s brought forward by the minority. So, no rights for the minority unless the Chair so designates. In fact, in this resolution, it allows the Chair to veto even the ability for the President to have legal counsel in the room. If the chair chooses at his whim, they can literally kick out the President’s legal counsel. This is unprecedented. It’s not only unprecedented, this is Soviet-style rules. Maybe in the Soviet Union you do things like this where only you make the rules, where you reject the ability for the person you’re accusing to even be in the room to question what’s going on. For anybody else to call witnesses when only one person has the right to call witnesses. And as we saw just the other day, [Chairman Adam Schiff] was literally directing the witness to not answer certain questions by the Republicans. What kind of fairness is that? Maybe you think it’s fairness if you can run roughshod over somebody because you’ve got the votes, but that’s not how impeachment was supposed to go.

“When you ask the American people who know that they’re paying higher drug prices and they see that there’s legislation, bipartisan legislation, to lower drug prices that won’t come to this Floor because of the infatuation with impeachment. We don’t even have a bill to formally pay our troops and make sure they have the tools they need to defend this country because there’s such an infatuation with impeachment. Madam Speaker, when you look through this resolution and you see how one-sided, how Soviet-style this is running. This is the United States of America. Don’t run a sham process, a tainted process, like this resolution ensures. It ought to be rejected and I think you will see bipartisan rejection of this resolution and I yield back the balance of my time.”