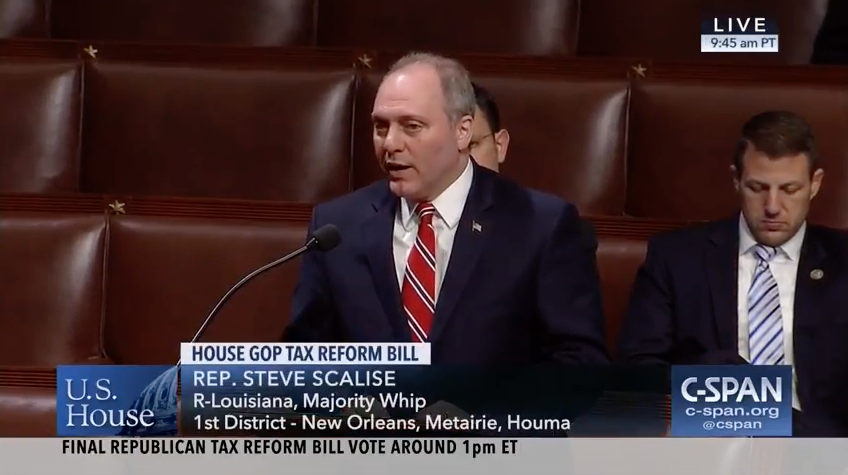 Click here or on the image above to see his full remarks.

“Chairman Brady has done an incredible job in bringing this tax bill to the House floor.

“This is a historic day for families saying, ‘we want to pay less in taxes’. [You hear] the complaints, as myself and so many others have, every time we see a company move more jobs overseas—good high-paying jobs overseas because America has the highest tax rate in the industrialized world. We do something about that today, Mr. Speaker, by cutting the corporate rates so we can be competitive again and bring those jobs back home.

“Let’s talk about something else that is going to be a benefit to hard-working families—we simplify the tax code [so] that over 90 percent of families will do their taxes on a postcard. Think how much that is going to save, because the code is so complicated and so massive that nobody can figure it out. We simplify the code. We lower tax rates. Everybody is going to see lower tax rates at every income level. We double the standard deduction from $12,000 to $24,000. That double standard deduction is going to be a big win for hard-working families that are struggling.

“Mr. Speaker, in our bill, we completely repeal the death tax, probably one of the most immoral parts of our code where small businesses, family farms—if their loved one dies, immediately after that, they get a big tax bill that forces them to sell their small business instead of passing it on to their family. That’s part of the American Dream. We repeal the death tax and deliver a much fairer code, Mr. Speaker. What this bill is about is putting more money in the pockets of hard-working families, getting our economy moving again, and creating jobs. When people see the highest corporate tax rate, tens of thousands of jobs going to [go to] Ireland and Canada. I love Ireland and I love Canada, [but] I don’t want them to have tens of thousands of our good jobs. Let’s bring those jobs back. In our bill, we do that, Mr. Speaker.

“This is a win for hard-working families and puts money back in the pockets of people who have been struggling so long. Wages will finally increase after 10 years of a stagnant economy and [it’s] about time we answer the call that millions of Americans have been asking us to do.”