WASHINGTON, D.C.—House Republican Whip Steve Scalise (R-La.) joined Fox News Channel’s Fox News at Night with Shannon Bream to discuss how the energized House Republican Conference is ready to continue fighting for conservative values and battling against Democrats’ shift to the socialist left. Speaker Pelosi’s shift towards socialism was was soundly rejected by millions of voters across the country, and Whip Scalise emphasized that House Republicans will use every opportunity to fight Democrats’ agenda and deliver results for hard-working families. 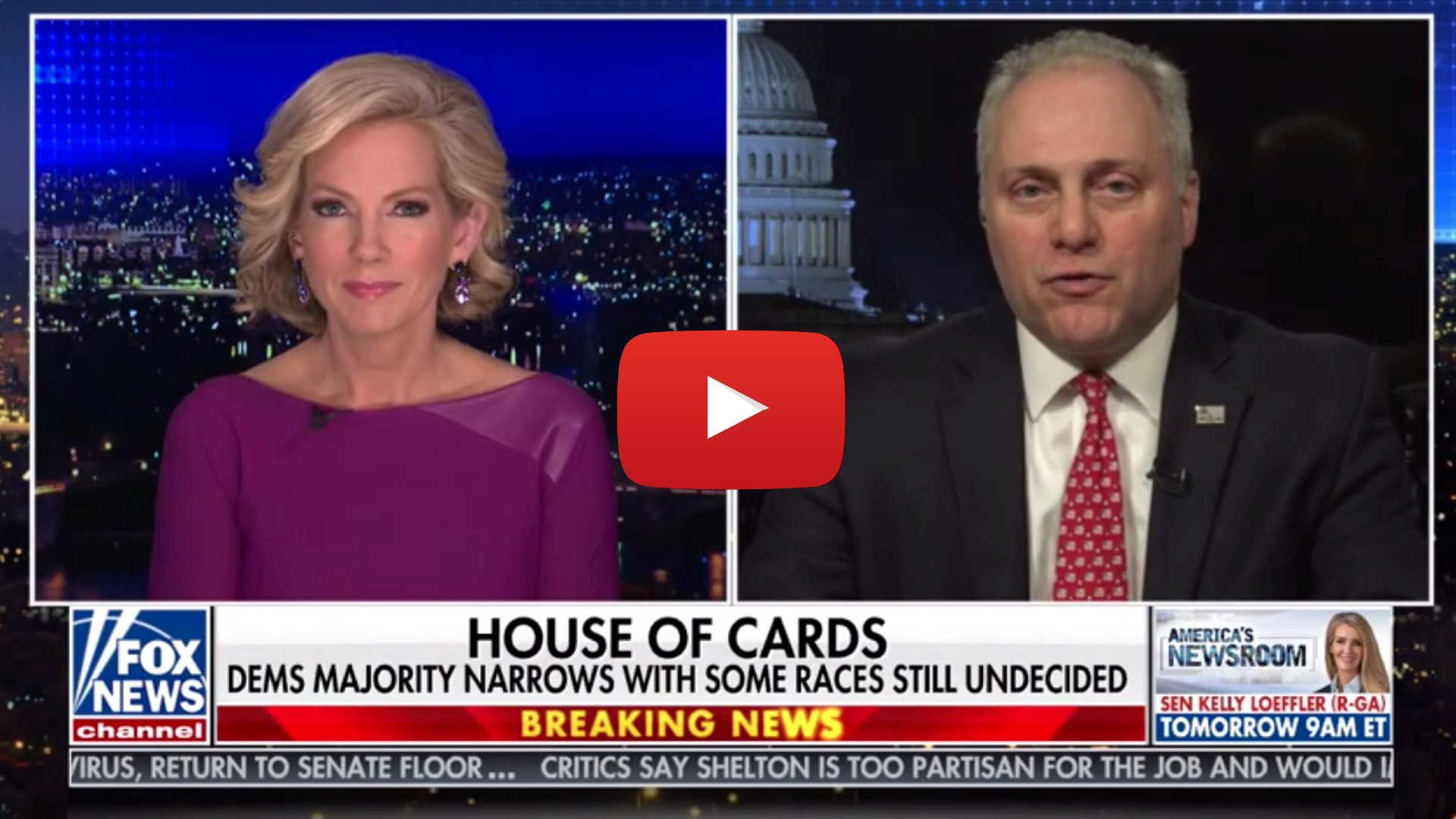 On House Republicans’ plan to fight against Democrats’ socialist agenda:

“The plan in the House is just to continue to battle the socialist agenda that Speaker Pelosi and all of her allies in the House moved to in the last two years. You know, it’s funny watching some of the liberals trying to wring their hands now of socialism so there’s this battle between liberals and AOC, and there are no moderates left, by the way, when the press tries to call them moderates against the socialists. So, the bottom line is they voted for two years for a socialist agenda – defunding the police, raising taxes, Medicare for All, getting rid of fossil fuels – and then they were rejected at the polls. We’re going to probably end up with at least 212 House Republicans shocking all the so-called experts. Over 20-seat flip from what the experts were projecting. And so, Pelosi realizes she’s got real problems as do all of those swing district Democrats who are voting for the socialist agenda.”

On Democrats’ attempt to hijack the Georgia Senate elections:

“In terms of the Senate, what you talked about a little earlier in that previous segment was exactly right. Those two seats in the Senate, both Senator Perdue and Loeffler, you had Chuck Schumer just the other day saying, ‘We change Georgia, we change America.’ I don’t think the people of Georgia want New York values to be a proxy for their values in the United States Senate, yet that’s what Schumer would do if he were able to get those two seats. And so, there’s a lot at stake. I think people know that. The fact that they’re trying to get Democrats other states to register, not necessarily to move to Georgia, just to register in Georgia to affect that outcome ought to scare the people of Georgia who don’t want outside states like New York and California to try to hijack their two Senate districts for the proxy of the left.”

On Democrats’ shift to the socialist left:

“You can package up socialism however you want, it smells just as bad. If you look at their agenda, especially in those swing districts, Shannon, there’s about 35 to 40 districts in America that are truly swinging back and forth that we were able to flip a lot of and we’re going to flip the rest in two years to get the House back. Most of those Democrats ran saying they’d be pro-life and pro-gun, every single one of them had an F-rating with National Right to Life and an F-rating with the NRA. You’re not pro-life and you’re not pro-gun when you have an F-rating with National Right to Life and an F-rating with the NRA. And that’s really the problem they’ve got is they voted for socialism, they voted to defund the police. Many of them got beat and some of them almost got beat and will get beat in two years and now they just don’t want to use the term socialism. It’s not the term, it’s the bad policies that they voted for, and the problem is they’re going to reelect Speaker Pelosi and continue going down that far left path.”