WASHINGTON, D.C. — Today, House Republican Whip Steve Scalise (R-La.) joined Fox News Channel’s Fox & Friends to provide an update about Hurricane Ida’s impact on Louisiana and discuss ongoing recovery efforts in the state. Whip Scalise highlighted that Hurricane Ida was nearly a Category Five hurricane and severely damaging Louisiana’s power grid and leaving over a million people without power for an uncertain amount of time. Whip Scalise also thanked people across the country for their prayers and help with this natural disaster. 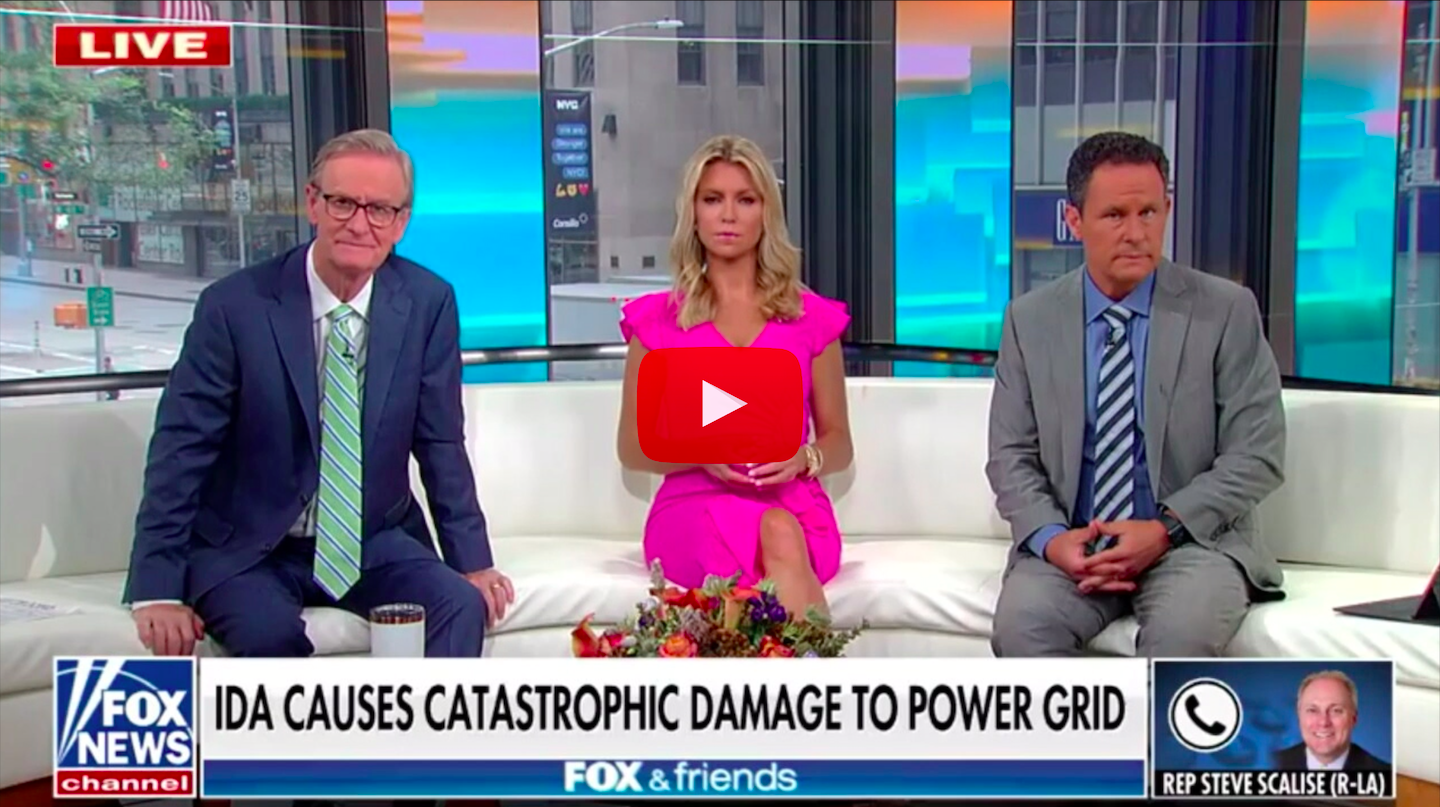 Click here or on the image above to watch the interview.
On Hurricane Ida’s impact on Louisiana:
“Clearly, when you look at how [Hurricane] Ida came in – it was a Category Four and in [reality], almost a Category Five – and then it sustained those winds for hours and hours. It was still a strong Category Three when it was hitting around the New Orleans area. So you know, you can imagine those [kinds] of winds – over a hundred mile-an-hour winds – sustained for hours at a time just doing tremendous damage to people’s houses as well as to the energy infrastructure. And right, that is the most immediate problem right now because you know what we’ve talked to the power companies, and they’ve got some major lines down – one over the Mississippi River, that’s in the Mississippi River – a lot of the physical structures of substations that are down. So they’re still assessing that damage. They were only able to get in starting yesterday, but there’s a lot of damage assessments still going on. And they’re saying be prepared for weeks in some sections of the New Orleans region. And, of course, you can imagine what [a] hundred degrees – as Janice just talked about – that is a big concern.”
On the issues that Louisianans are facing after Hurricane Ida:
“I’m really focused on evacuating the hospitals in the lower-lying areas. So Terrebonne and Lafourche parishes right where the eye of the storm came over it at Port Fourchon. Some of those hospitals are being evacuated, and they’ve still got COVID patients too. So, you know, you’ve got people as they start repairing their houses – and this is one thing we’re emphasizing – just be very careful because we see a lot of injuries after hurricanes from people, you know, on roofs and things like that, doing recovery work, and then ended up in the hospital. So, we’re just encouraging people to be safe there. So, we’re trying to get [these] hospitals in a place where they can take new patients in their emergency rooms, but to try to get everybody else out too – to higher-level hospitals in other parts of the state that weren’t hit as hard.”
On Louisiana’s damaged electricity grid:
“You know, that’s where the big concern is the electricity grid. There [are] about eight different lines that feed the city of New Orleans. You know, you can imagine a spider web of power lines, and they’re telling us that all eight main lines went down. But now, you know, what levels does that mean? How long is it going to take? Some will take longer than others. You don’t need all eight at the same time to get your power grid back up and running, but they’re making those assessments. You know, we do have a nuclear facility, and that came out fine. You know, those facilities are built for much stronger [damage], but just to get the power to households right now is going to be the biggest challenge. And you know that all of our hospitals are running on generators. We checked. They’ve got more than enough power supply – the fuel – to keep their generators going, and there’s a constant flow of that. So, there’s no concern that the hospitals won’t be able to maintain power. But, for the, you know, the bulk of the city, people don’t have any power and won’t for at least days or weeks.”
On the American people stepping up to provide relief to Louisianans in need:
“And we appreciate the prayers. Look, you’ve already got a lot of faith-based organizations, and I know I was on the phone yesterday with folks from Samaritan’s Purse who were bringing in relief supplies to some of the hardest-hit areas. And so many people are sending in relief supplies. We appreciate that. And we appreciate the prayers too.”