WASHINGTON, D.C.—House Republican Whip Steve Scalise (R-La.) took to the House Floor today to speak on the JUSTICE Act, the Democrats’ misguided reform bill, and the unnecessarily partisan nature of Democrats’ reform efforts. Whip Scalise emphasized that this critical moment can affect real, lasting change if the parties come together to hash out differences. Whip Scalise noted that heroic law enforcement officers saved his life back in June of 2017 and he also saluted the incredible work of law enforcement officers who selflessly serve their communities with integrity every day. 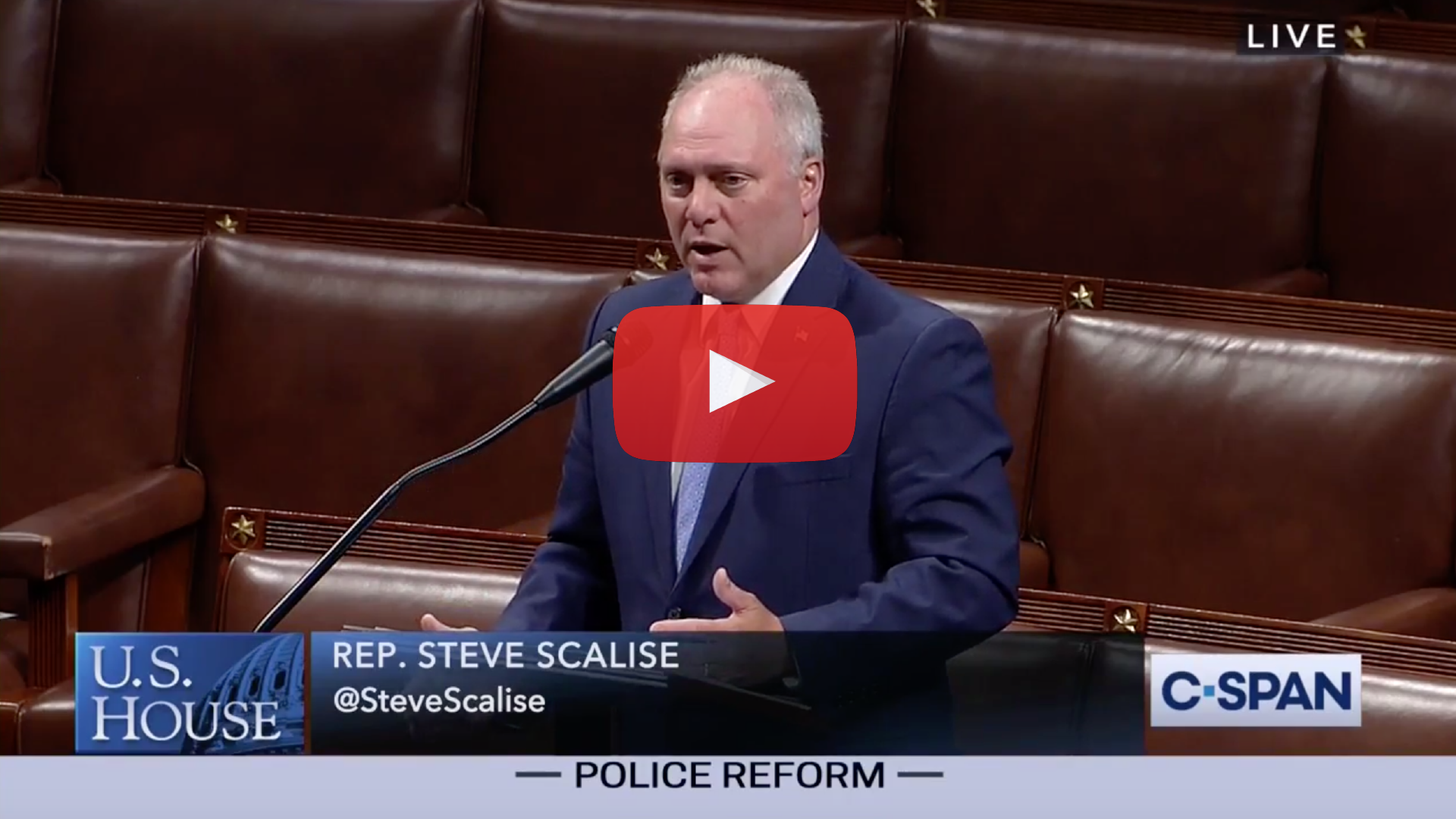 “Thank you, Mr. Speaker. Thank my colleague and friend from Ohio for yielding and for his leadership on this issue. And I also want to thank my friend a colleague from California, Miss Bass, for her work over years on this issue as well. Mr. Speaker, we stand out a moment in time, that’s so important in our country’s history a moment where we can actually come together and solve a problem that we’ve seen that’s going on for a long time.

“Something that’s come to light in different ways over years, but George Floyd’s death, a death that never should have happened really did awaken and create a moment in time where we can actually get something done on this issue. And I hope that we rise to this moment. I hope that we work together to address the problems that we’ve seen while making a careful and important distinction not to undermine the important work that police officers do every day, risking their lives to keep us safe.

“And that’s really the thing that we’ve got to focus the most on because we know there are bad cops like there are bad people in any profession. But to paint everybody with the same brush is not only unfair, it actually does a disservice to the work that they do in every community on a daily basis. That’s unheralded.

“And so what I would first say is that while the bill that’s before us today is a bill that has some components that we support, but some components that we feel would create even more problems. There can be work done to come together. I know that in committee there were many opportunities to bring that forward, to bring other amendments forward. It’s a shame that every single Republican amendment was shut down. Every single amendment was shut down in committee. Every single amendment that we brought forward was shut down on this House floor.

“That’s not going to solve this problem. I think we all know that for here to make law, which I think a lot of us are, then it’s going to mean both sides coming together to bring their best ideas forward and to address the problem. I was very disappointed yesterday to watch on the Senate floor, our former House colleague and friend, Tim Scott, who’s worked on this for a long time.

“Somebody who’s actually been a victim of racial profiling himself, worked closely with a lot of people to bring a bill to the floor that had a lot of bipartisan support. And yes, maybe some people had differences with the bill. But instead of coming together and working through those differences, the Democrats in the Senate voted down the opportunity to even bring the bill on the floor.

“The motion to proceed is the motion just to start debate on the issue, they voted it down. How is that going to solve the problem? If you don’t even want to debate the problem at least here on the House floor, we’re having a debate.

“I wish we had an open amendment process where we could try to settle these differences here. That’s not going to happen, unfortunately, but I — As my colleague, Mr. Armstrong, don’t give up hope, but we present the opportunity to solve this problem. And if you look at the bill, H.R. 7278, the JUSTICE Act by my friend, Mr. Stauber, who served as a police officer for over 20 years.

“He saw the good and the bad in policing and he brings that unique perspective as somebody who wants to solve the problem. He will tell you that the person who doesn’t want a bad cop more than anybody is a good cop. You don’t want to go on a call with a bad cop.

“You want to root them out while not undermining the important work that law enforcement officers do. Every day Mr. Speaker, I’ve seen it firsthand. I would not be here today if it wasn’t for the bravery and heroism of law enforcement. I’ve seen them risked their lives for myself and for other people, maybe not knowing if they’re going to make it home that night and they do that every day.

“And if there’s a bad cop, let’s root them out. But we also need to make sure we don’t undermine the ability for the good cops that are all around our communities, keeping us safe every day.

“They have a right not only to keep us safe, but they have a right to make it back home to see their families at the end of that night too. And let’s make sure when we’re striking this important balance, we don’t forget about those two competing sides. We can solve this problem.

“We need to work together to get this done. And hopefully we will do that before this moment is lost. With that Mr. Speaker, I yield back.”