WASHINGTON, D.C.—House Republican Whip Steve Scalise (R-La.) took to the House Floor today to speak out against an impractical impeachment that hasn’t had a single House hearing and won’t be taken up in the Senate until after the President’s term has expired.

The Whip implored his colleagues to not add fuel to the fire of divisiveness in this country with a rushed impeachment, and urged Republicans and Democrats alike to denounce political violence and violent rhetoric wherever it happens. He also thanked the many Capitol Police officers who put their lives on the line to protect Congress, and honored the memory of the officers who lost their lives last week. 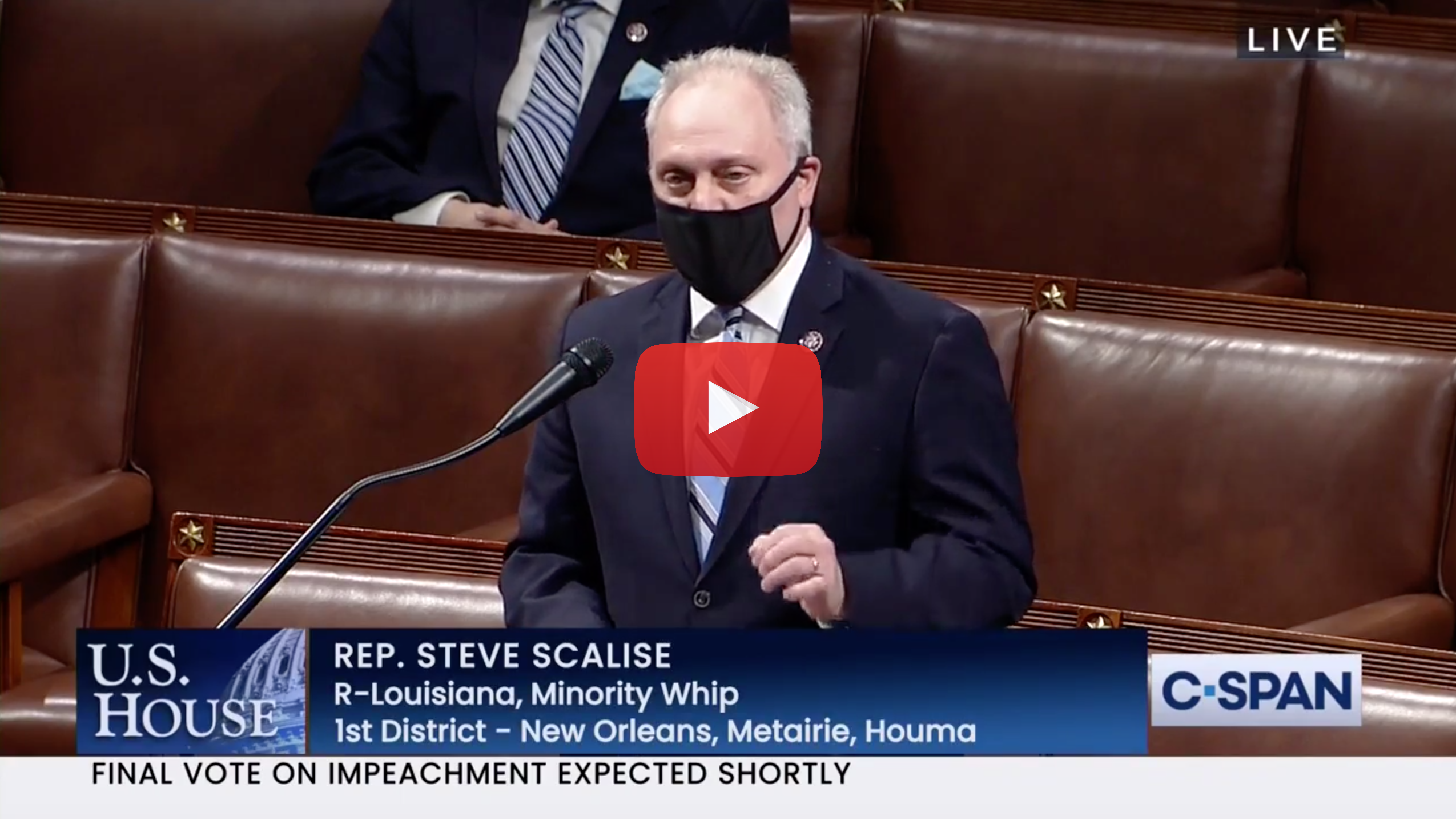 “Madam Speaker, our nation still mourns the unacceptable violence and anarchy that took place in this Capitol last week.

“As we speak, arrests are still being made and the anarchists who stormed our Capitol are being brought to justice, as should be the case.

“Emotions are still high. But in this moment, we need to be focused on toning down the rhetoric and helping heal this nation as we move toward a peaceful transition of power to President-elect Joe Biden next week.

“Madam Speaker, I’ve seen the dark evil of political violence firsthand and it needs to stop. But all of us need to be unequivocal in calling it out every single time we see it, not just when it comes from the other side of the aisle.

“I oppose this rushed impeachment brought forward without a single hearing. And by the way, the Senate will not even take this up until President Trump is out of office. So let us keep that in mind: it will only serve to further divide a nation that is calling out for healing.

“Madam Speaker, many speakers today have invoked one of our nation’s greatest leaders, President Abraham Lincoln. Maybe we should follow some of Lincoln’s wisdom that he’s imparted on us in moments like this.

“As Abraham Lincoln was giving his second inaugural address in March of 1865,  Lincoln issued us a challenge. This is what he said:

“‘With malice toward none; with charity for all; with firmness in the right, as God gives us to see the right, let us strive on to finish the work we are in; to bind up the nation’s wounds; to care for him who shall have borne the battle, and for his widow, and his orphan—to do all which may achieve and cherish a just, and a lasting peace, among ourselves, and with all nations.'”

“Madam Speaker, in times like these, let’s not reach for our darkest demons but instead, like Lincoln, seek the higher ground.

“May God bless this great United States of America.”