WASHINGTON, D.C.—House Republican Whip Steve Scalise (R-La.) penned an op-ed in the Wall Street Journal denouncing last week’s violence at the Capitol and drawing on his experience from the baseball shooting to lay out what leaders from both parties must do to bring the national temperature down.

Scalise stressed that “Republicans and Democrats alike must have the moral clarity to call [violent rhetoric] out whenever it is spoken, not only when it comes from the other side of the political aisle.” With just days to go until President-elect Joe Biden’s inauguration, Whip Scalise urged calm, accountability, and unity, concluding: “I urge all Americans to resist throwing fuel on the fire. Given practical considerations, I believe that both the impeachment process and calls to invoke the 25th Amendment represent just that—more fuel on this raging inferno.” 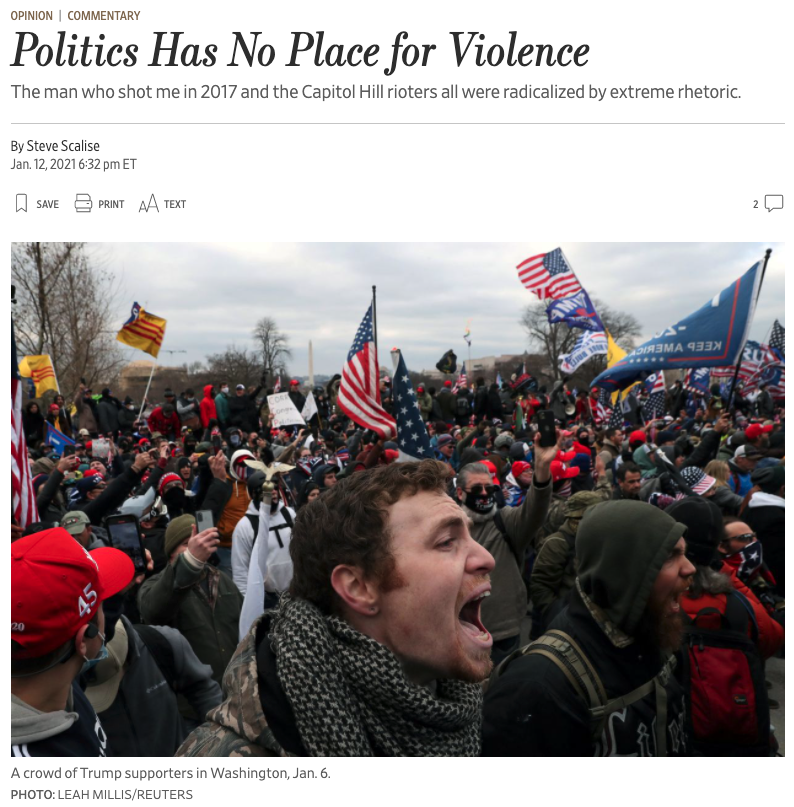 I’m still angry after last week’s events at the Capitol. I mourn for Capitol Police Officer Brian Sicknick, who died from injuries inflicted by rioters, and worry about the morale and safety of his fellow officers. My concerns continue for the safety of my colleagues, staff and members of the press who work in Washington. President Trump should have denounced the attack unequivocally as it was taking place.

What happened last Wednesday went well beyond any candidate’s legal right to contest an election and is another glaring sign that public discourse has gotten out of control. With only days to go until President-elect Biden’s Inauguration, our national temperature is far too high. A powder keg had been smoldering long before Wednesday’s events. For the sake of our country, politicians and media figures—of both parties—have to tone down their rhetoric.

In 2017, I was shot on a baseball field by a politically motivated gunman. The deranged shooter was heavily influenced by the demonization of congressional Republicans by some Democratic politicians, whose statements were amplified by the mainstream media. In the aftermath of my shooting, I made a conscious decision not to hold anybody but the gunman responsible for that day’s events.

It would, however, be naive to think the shooter arrived at his decision in a vacuum. It would be equally naive to think that the Capitol rioters arrived at their decisions in a void. Violent rhetoric helps radicalize people. Republicans and Democrats alike must have the moral clarity to call this language out whenever it is spoken, not only when it comes from the other side of the political aisle.

Many Democrats who were rightfully quick to join us in condemning last week’s events at the Capitol were noticeably silent over the summer. In those months, Americans watched looters ransack small businesses while cities went up in flames. Radical progressives attacked police precincts and federal courthouses, and leftist protesters clashed repeatedly with police. In Minneapolis, Kenosha, Wis., Seattle’s “Capitol Hill Autonomous Zone,” the District of Columbia and other cities, many elected officials outright enabled a cruel disregard for life, property and the rule of law in the name of social justice. Many in the media cheered the violence. “Show me where it says protesters are supposed to be polite and peaceful,” CNN’s Chris Cuomo said.

Elected officials and media personalities have a responsibility to condemn political violence and violent rhetoric across the board, not only when it’s politically convenient. Republicans don’t have a perfect record either. They must commit to this ideal alongside Democrats. Selectively condemning political violence sends a message to would-be perpetrators that cruelty and destruction in the name of a political agenda will be celebrated. We must put a stop to this dangerous idea. America settles its differences through debate and democracy, not mob rule and violence.

I reject the notion that Wednesday’s actions were a mostly peaceful protest or that antifa infiltrators led the mob into the Capitol. I also reject the notion that the mob’s actions accurately represent the motivations of the millions of Americans who voted for President Trump or the Republican Party. We have to be rational and honest while holding ourselves and others accountable.

I urge all Americans to resist throwing fuel on the fire. Given practical considerations, I believe that both the impeachment process and calls to invoke the 25th Amendment represent just that—more fuel on this raging inferno. There will always be some who reject calls for unity and instead seek revenge. No good can come of that mind-set, trust me.

Unity and accountability are compatible. Anyone who tells you otherwise is trying to settle political scores of the past. Republicans have a responsibility to put our house in order and focus on ensuring a smooth transition of power. Democrats have that responsibility too. I am committed to pursuing these dual goals, and I invite everyone who cares about America’s greatness to join me in learning from the mistakes of the past while building a brighter tomorrow.