WASHINGTON, D.C.—House Republican Whip Steve Scalise (R-La.) joined Fox News Channel’s The Ingraham Angle to emphasize that struggling workers, families, and small business across the country aren’t focused on an another impeachment distraction by the Democrats – they want Congress to work together to address the issues they’re currently facing, like re-opening schools and our economies. 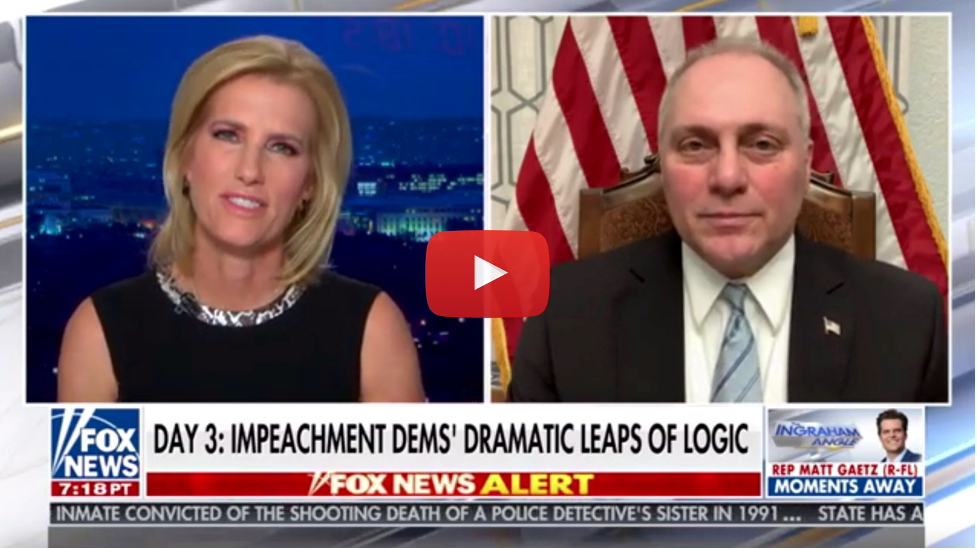 “You know, when you look at all of the different things that were said by Democrats through the ‘summer of love’ as they called it. You know, ‘mostly peaceful protests’ where cities were getting burned down, where cops were being murdered left and right. Look, violence of any kind needs to be decried. I don’t know of anybody on our side that was ok with January 6th. I called it out myself. So many others have too. The difference is during the summer when we were calling out that violence that was happening in all these cities with Antifa, with all the Democrat officials encouraging them to do it and saying they would bail people out if they were arrested being part of those mobs. I didn’t hear that outrage by the Democrats. And so, you know, you can’t have this double standard and they’re wasting so much time right now on this impeachment that we all know how it’s going to end. It’s not going to end with a conviction. But what they don’t want you to know was what else was happening in the Capitol today Laura.”

“Today we had votes in the House committees all across the Capitol today for things like, for example, to make sure that we could put more money in place for increasing vaccines. Every Democrat voted that amendment down. We had an amendment to ensure that illegals wouldn’t get [vaccine] priority over Americans. Every Democrat opposed that. [Preventing] taxpayer funding for abortion. Today there were votes in Congress. Every Democrat voted against it. You can wonder why they want the side show of impeachment going on in the Senate so that you’re not paying attention to those things. Right now, you’re hearing out of the White House – they’re floating the idea, Laura, in the White House – of shutting down the state of Florida while Joe Biden is encouraging and opening up the southern border.”

“No, they’re killing all the energy jobs. [Democrats] are, you know, they’re shutting down schools and destroying the future for these young kids. The science clearly says [reopen schools.] They keep saying follow the science until their own scientists from the CDC Director sitting in front of the CDC logo during a press conference said, ‘You can safely reopen schools’ and you saw the White House’s reaction. They said, ‘Oh no, they don’t speak for us.’ Wait a minute, what about the science? Of course, you can safely reopen schools. This is what’s going on Laura, that they don’t want you to know about.”

On holding Governor Cuomo accountable for covering up data on his deadly nursing home order:

“Look, what keeps me up at night are the people whose futures are being crushed by mostly liberal governors and mayors that are shutting down cities, destroying small businesses and the hopes and dreams of millions of Americans who used to have a really good job but don’t anymore because of [Democrats’] bad decisions.

“The bombshell that was dropped tonight in New York where the one of the top aides to Governor Cuomo admitted that they hid data on so many thousands of people who lost their loved ones in nursing homes and they won’t even show you the data. The families have been begging for this.”

“I’ve been calling on [the Biden DOJ to open up an investigation] for a long time, for months. We’ve been calling on Governor Cuomo to show the data. You know, you don’t need an act of Congress, but he won’t do it. But now his own top aide admitted that they were hiding the data because they didn’t want the public to know what happened. Thousands of people in New York have been demanding answers. Janice Dean, you’ve seen her. You know, just horrible stories of families who are being devastated. We’re going to keep fighting for those answers.”