WASHINGTON, D.C.—House Republican Whip Steve Scalise (R-La.) joined Fox Business Network’s Mornings with Maria to discuss the ongoing trade negotiations with China and the potential for a vote in the House to approve USMCA. Whip Scalise stressed the positive economic gains America has seen under President Trump’s leadership, which have strengthened America’s position in trade negotiations. 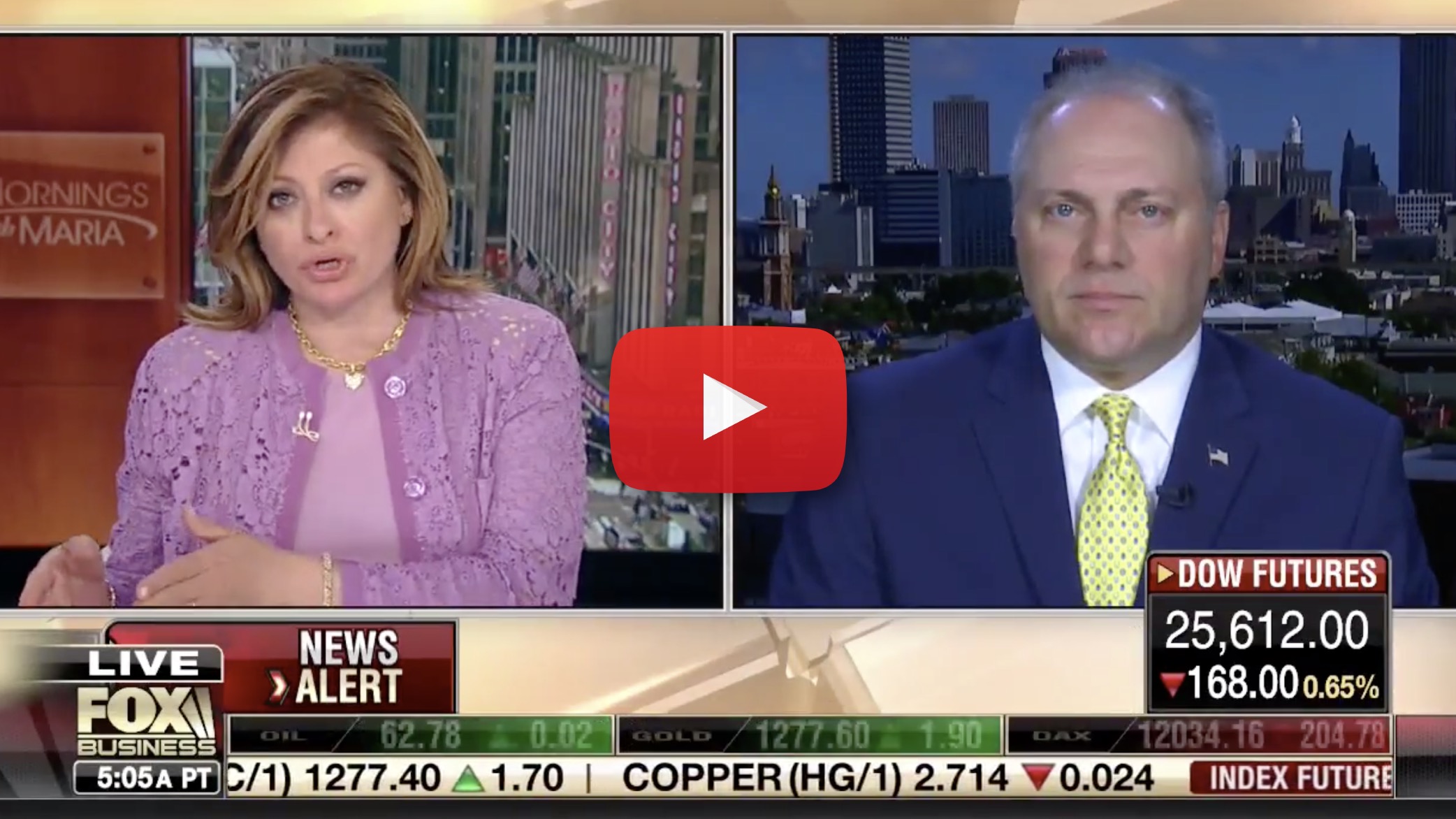 On the Iran threat:

“Well, it is serious. They have been making very credible threats, Maria. The President is preparing to make sure that America’s properly defended. Hopefully, it doesn’t come to any kind of conflict and Iran recognizes that if they attack America, there are going to be severe consequences to them.

“It does show, Maria, that these sanctions are working. What President Trump has done to force Iran to confront this nuclear weapons program that they are trying to develop and saying, ‘We’re not going to have a nuclear-armed Iran,’ with the sanctions to go behind it, shows how effective they are. If Iran thinks they can attack us with some mild response, I think they are seeing right now it would be a very bad mistake.”

On trade negotiations with China:

“Well, I wouldn’t say [negotiations] have collapsed. Obviously, we’ve run into a disagreement on how to properly enforce trade laws. The reason is because China is not used to complying with trade laws with anybody. They cheat, they dump, they steal property, and now … President Trump and Ambassador Lighthizer are trying to get a negotiated agreement that would be enforceable. I hope we get there.

“I think China is seeing that their economy needs America’s economy more than we need theirs right now. Hopefully, we get both sides to agree because that would be better for all of us. In the meantime, somebody has to stand up to China. I am glad that President Trump finally is. By the way, our allies all around the world are glad this confrontation is happening because they want to see China comply with the rules everybody else has to play by.”

On the Administration’s crack down on Huawei:

“Sure, it has an impact on everybody that is why we would like to see it resolved. At the same time, if China is not willing to play by the rules that everybody else has to play by, how many more years are we just going to sit by? China has been doing this for a long, long time.

“By the way, I am glad to see our technology companies here in America, stand up to Huawei. I think we have the ability to counter the technology that they have. For whatever reason over the last 10, 20 years Huawei has been able to corner this market. Frankly, it is concerning to a lot of us.

“You see the Department of Defense taking action to move away from their products. If we can’t trust that the information that we are sending over Huawei products is safe and secure, then I think that there are other people out there, especially our American technology companies that lead the world, that can step up and replace what they’ve been doing. I think you are seeing that action start to happen.”

On the potential for a vote in the House on USMCA:

“I hope [Speaker Pelosi] does [hold a vote]. There are Republicans and Democrats in Congress who want to see USMCA brought to the floor. I think you see President Trump and Ambassador Lighthizer continuing to make good faith negotiations with Democrats to try to address any issues that they have.

“When you saw the President take action to drop the steel and aluminum tariffs, I think that was a very positive sign. It shows you we have a lot to gain. Our economy has a lot to gain. American workers, agricultural communities, and a lot of other industries have a lot to gain by getting this done. Hopefully, these delays don’t go on any longer because the delays are costing us jobs. There is a lot that we can see from a USMCA deal getting done. Canada and Mexico want to get this done as well.

On the economic workshop in Bahrain:

“Again, this is just one more example of President Trump trying to get an agreement with countries all around the world to improve our relationships and our trading ability to be able to negotiate better deals with other countries.”

On why now is the time to pressure China on trade:

“There are going to be opportunities to get better agreements with our Asian friends. There were concerns with [the Trans-Pacific Partnership].  When you look at all of our friends around the world there is a widespread alliance, a worldwide alliance, that wants to take on China.

“Everybody knows the only country that can lead that fight is the United States. Our economy is so dominant right now. We’ve got great economic news in America. We see the great economic numbers and you show them all the time. It is because of the tax cuts and the easing of regulations that were killing American jobs without having any benefit on the economy. Having a stable environment for our regulations and lower taxes has made America, once again, the dominant economy in the world.

“It’s given us greater leverage to lead that fight against China. Make no mistake, all of our allies, individually and collectively, have been wanting to take on China to get China to play by the rules that everybody else plays by. They all know the only way it can happen is if America takes the lead. You are seeing that now. You are seeing China’s economy react from it. Again, we would like to see this resolved, but it has got to be resolved in a way that’s fair for America, and will benefit all of our friends around the world, but it starts here at home.”