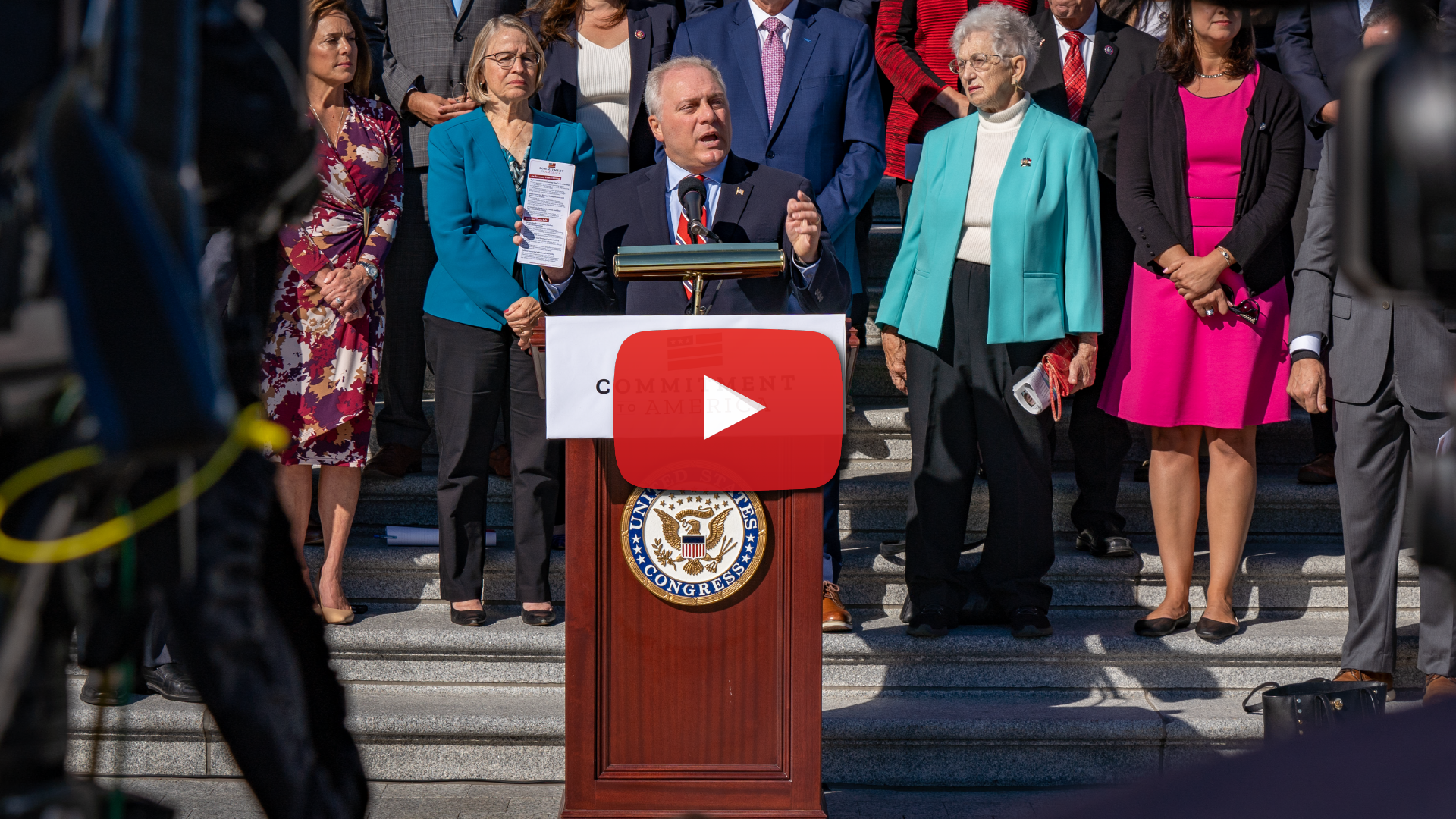 Click here or on the image above to view Whip Scalise’s remarks.
Whip Scalise’s remarks: “Thank you, [Leader McCarthy], and I, too, want to extend my prayers and thoughts to the people of Florida and South Carolina as they face the devastation of Hurricane Ian. “We’re here today on the backdrop of the Capitol as we get ready to go back into our communities around the country. And as we go around the country, you’re hearing the same recurring theme: Families are struggling under the weight of big government socialism. “What [President] Biden and [Speaker] Pelosi have done in the last two years to ram through trillions in spending, mountains of heavy regulation, and more big government socialism, it’s hurting the lower-income families of America. It’s costing people [their] jobs [and] it’s making it harder for them to put food on the table. People are saying, ‘Enough is enough,’ and they’re losing hope. But the good news is we’re providing hope in what the ‘Commitment to America’ represents.“We’re laying out to the American people a plan – a vision for the future. [We have] bold conservative ideas that actually confront these problems that [Speaker] Pelosi, [President] Biden, and all the other big government socialists here in Washington have done to make things harder for people. We’re going to actually return power back to people [and] restore freedom and hope to communities. We’re going to get [the] government off of people’s back and do things like reduce inflation, like bring an energy policy that promotes American energy after we’ve seen a year and a half of attacks on American energy.“When [President] Biden and [Speaker] Pelosi go after American energy, it yields higher prices at the pump. It means people can put less food on the table. You know, we were in Pennsylvania rolling this out just a few days ago. We heard from families that are struggling. They talked about how it makes it harder for them to live their normal lives.“When they talk about the border crisis. We had a sheriff – and we hear from sheriffs like this all the time – and unfortunately, we also hear from coroners, who tell us the thousands of deaths from fentanyl. Over 100,000 of our young people died because [President] Biden opened the southern border. And then China makes fentanyl – they know the drug cartels can bring it right across this open southern border – and it ends up in every community in America, which means every community in America is now a border town because [President] Biden won’t secure the border.“Republicans, if we win the House majority, will bring legislation to secure America’s border. We’re willing to show the country what we would do if they give us a Republican majority in November. And what’s interesting is to see the visceral reaction that happened literally just minutes after we rolled this out. You saw [Speaker] Pelosi and [President] Biden not saying they want to work with us to solve these problems – they just went right down the same old failed road of attacking good ideas.“They call it ‘MAGA extremism’ to lower inflation. [Speaker] Pelosi says it’s ‘MAGA extremism’ to lower energy costs [and] secure America’s border. [Speaker] Pelosi actually says it’s extremism to let parents be involved in their kids’ education. Well, you know what? If that’s what she thinks is extremism, maybe it’s time for [Speaker] Pelosi to go. “We’re going to fire [Speaker] Pelosi. We’re going to actually go and fight for the American people. To restore that hope with the ‘Commitment to America’ [and] show that there is a better way to get this country back on track and restore the American Dream for generations to come.”