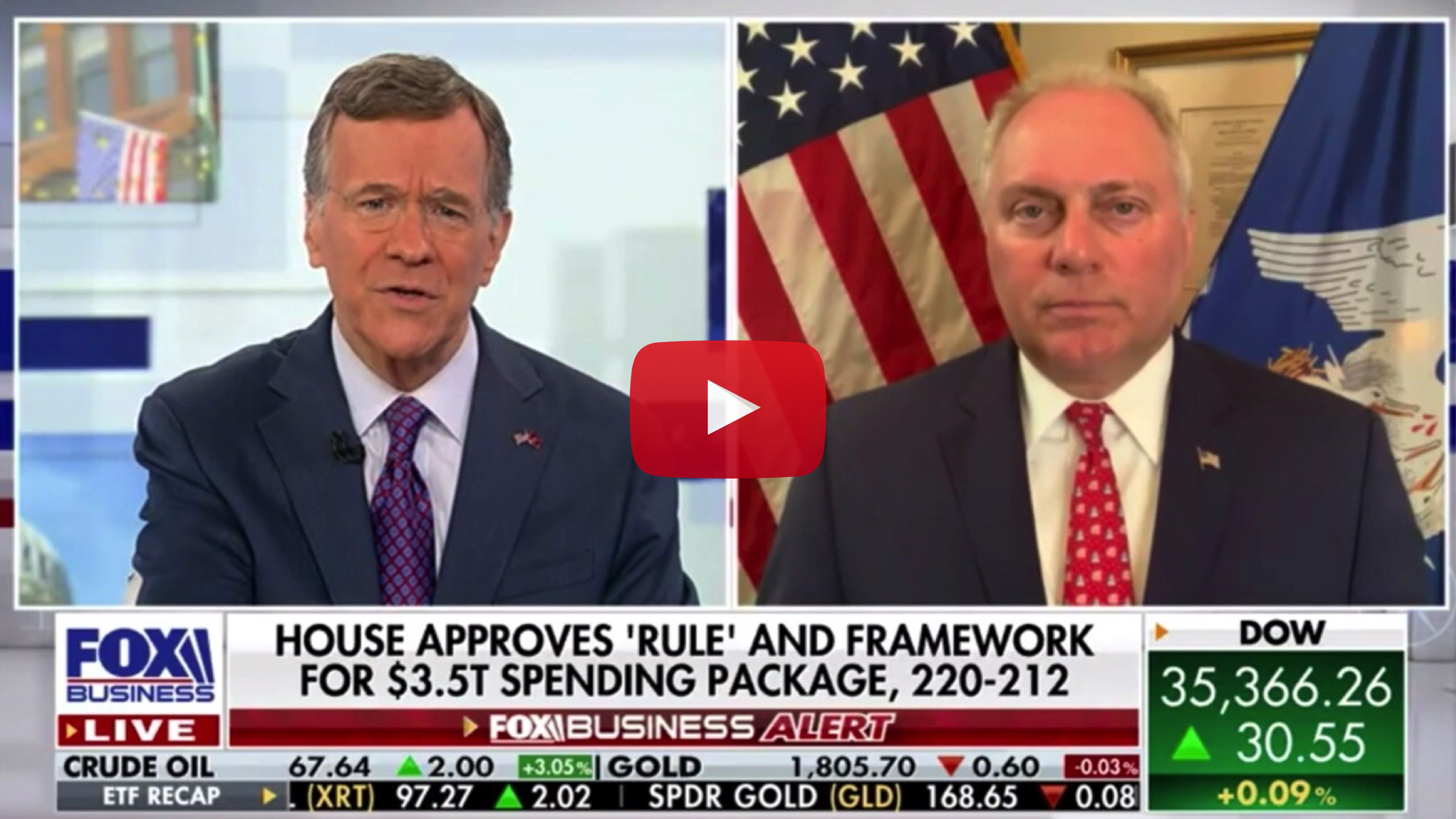 “Well, David, I think when you saw is tremendous pressure placed by Speaker Pelosi on those liberal Democrats who were in moderate districts and they caved, and they really didn’t get anything out of it. They just voted to pass on a party-line vote, a bill that allows another $16 trillion of debt. That’s right, not just the $3.5 trillion tax and [spending] bill that President Biden was working the phones, pressuring those Democrats to vote for today. But also additional debt. [This was] over a hundred-page bill that was passed today. A budget that very few Democrats read because Speaker Pelosi rewrote the thing last night. You harken back to the days of her saying, ‘You have to pass the bill to find out what’s in it.’ Well, they [were] threatened last night. A lot of threats were being thrown around by Speaker Pelosi, and you saw them cave. It’s a really horrible vote for the country.”

“You heard her threatening to go and run people against them in their primaries or to use re-districting. And I don’t know if she controls redistricting in some of those states but threatening to redistrict people out of their own districts. That’s the kind of stuff we were hearing last night. It was disgraceful. And, that’s what it took for her to give the President the ability to spend another $3.5 trillion of taxes and spending.”

On President Biden prioritizing his $3.5 trillion tax-and-spending spree over Americans trapped behind enemy lines in Afghanistan:

“And when inflation is already out of control, I’ll tell you, David, the most disgraceful thing is that at a time when you’ve got thousands of Americans abandoned overseas behind enemy lines because of President Biden’s failure in Afghanistan, he should have been working the phones. He said in seven days [that] he’s cutting and running. That’s what President Biden said. You would think every single day he’d be on the phones saving Americans who he left behind enemy lines. He was working the phones yesterday, pressuring Democrats to vote for his tax and spend package. That’s what President Biden was doing last night. Not working to save those Americans who he abandoned in Afghanistan. It’s disgraceful. There are a lot of things that he’s done that have been complete failures. The way he’s left Americans behind enemy lines is maybe the worst.”

“Look, I respect [Congressman Cuellar.] I respect a number of the members on their side. But frankly, you know, when you see a vote — all party line — where every Democrat voted for another $3.5 trillion of taxes and spending and an authorization to add $16 trillion more in debt on the backs of our children, that’s no longer a moderate. You know, you’re either a liberal or a socialist in their party right now. Now there are a lot of them that are in swing districts, but they’re not voting like anything other than a socialist right now.”

“All I know is right now [is] there are a lot of Democrats who are disgusted with what President Biden did just as we are on the Republican side. Because first of all, I’ve got a lot of my colleagues who served in Afghanistan. I just [held] a press conference this morning with 10 different Members [of Congress] who served in Afghanistan. They are furious. They know some of these translators personally. They’re hearing stories of people being executed. The Taliban [is] saying that they’re going out door-to-door to try to find some of these people. They’ve got lists. They’ve got names. They’ve got our military equipment, which is another thing we’ve asked President Biden to give an accounting of. We’re hearing reports over $85 billion of the best technology and military equipment in the world that President Biden just gave to the Taliban. These are terrorists! You’re talking about the heels of the 20th anniversary of September 11th, and President by not only just gave him a country, but he gave them Back Hawks, he gave them MRAPs, he gave them night vision goggles, artillery. It’s unbelievable this happened. It’s disgraceful. It’s why our allies all around the world are livid too. This President is an international embarrassment in the way he carried this out.”

“Well, first of all, it’s very disgraceful and telling of some of the people that were working in the Biden Administration, some from the Obama Administration. These were some of the people who were trying to stop Donald Trump from getting elected president in 2016 that President Trump talked about. Frankly, some of these people are still advising President Biden. They all ought to resign in disgrace if they had any shame. Unfortunately, I don’t think they do.

“The fact that they can’t tell the difference. They don’t know what a terrorist is. They just gave terrorists a country. And by the way, that country is right next to Pakistan, [which] has nuclear weapons. Look at what our enemies around the world must be thinking. What is China thinking when they look at Taiwan right now? What is Russia thinking when they look at Ukraine right now? Does anybody trust that this President is going to stand up to bad guys around the world? And do any of our allies think this President will have their backs just like he cut and run on them in this conflict?”