Whip Scalise also highlighted the ingenuity of American healthcare workers who are fighting on the frontlines and helping our country rebound from the Coronavirus outbreak. Whip Scalise emphasized how Congress must come together to confront this virus as well, and focus on smart and safe options to reopen our economy. 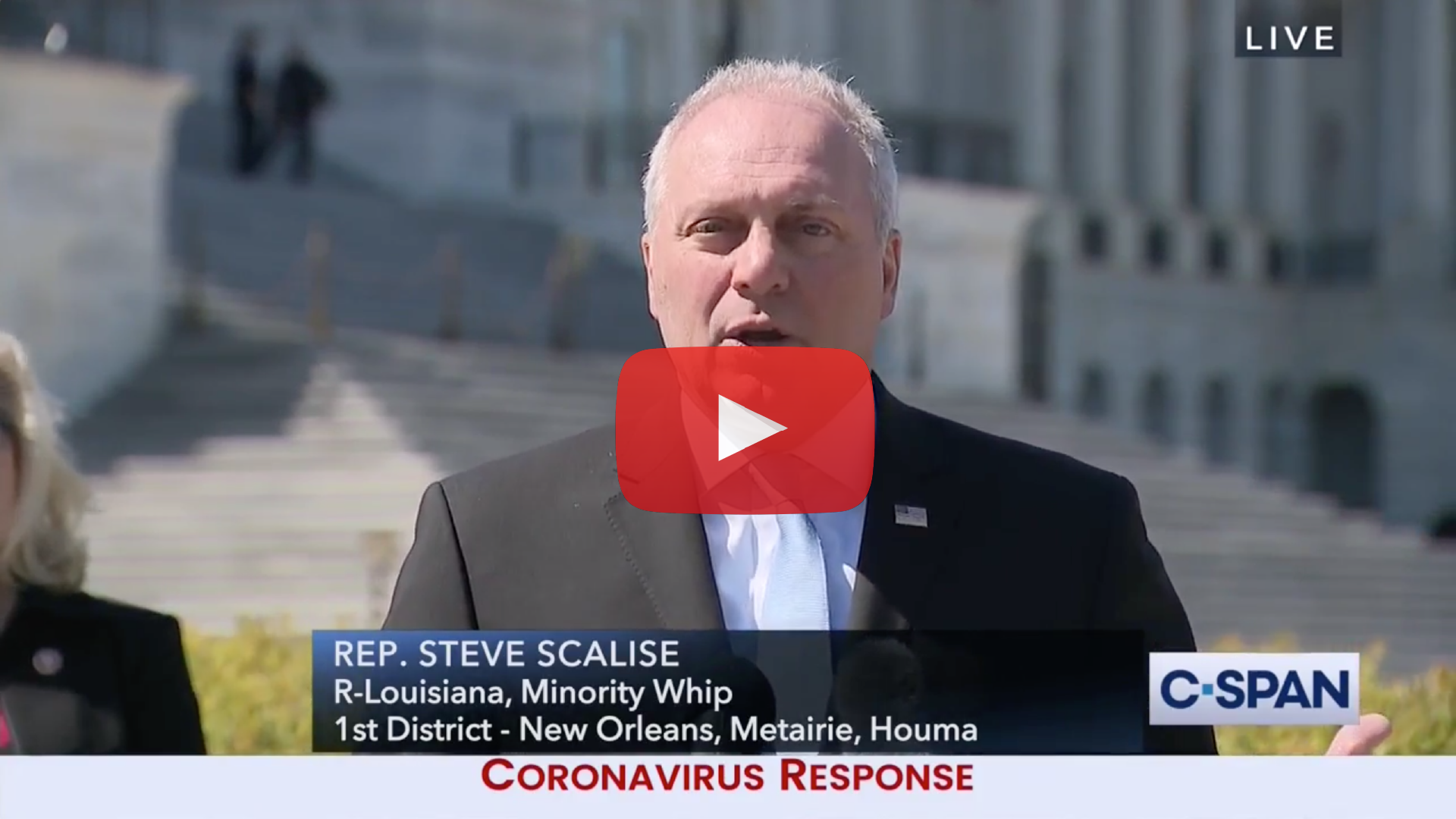 On the need to focus on defeating Coronavirus, while considering options to reopen our economy in a smart and safe manner:

“It’s really important that we are back here in Congress, back doing the people’s work. As millions of Americans at home are sheltering, they’re homeschooling, as my wife is doing with our two kids right now. As they’re wondering whether or not their job is going to be around when this is over. Millions of Americans, over 20 million Americans, don’t have a job right now because they’re unemployed. It’s important that Congress is here working to get through these issues, to work with the President to confront this virus, this hidden enemy that we’re all facing, but also looking with an eye towards the future: how we’re going to reopen this economy in a safer, smarter way. Nobody suggests there’s a false choice between economic health and personal health. We have to do both. We absolutely can do both when we start opening the economy up again. I’m proud that my Governor, I worked with him, we met last week and talked about reopening issues. And next week in Louisiana, elective surgeries will start again. And just think about this, while people have been home, while people have been trying to bend the curve down and clearly, we’re starting to see the curve come down in so many areas, we also know that people have been foregoing those critical tests, the life-saving tests: mammograms, colonoscopies, so many other procedures that people would normally be doing to protect their own health that aren’t happening right now. We’re unfortunately seeing suicides up, mental health problems that are starting to overwhelm mental health officials. So, there is another cost to this virus because people are losing so much: losing their jobs, losing their businesses, losing their old way of life, there’s a cost to that too. And so, we need to weigh all of that as we look towards opening the economy up again in a safer, smarter way, while we also confront how the health community is catching up with this disease.

“I’m encouraged every day when I hear breakthroughs. Drugs that were used effectively for things like Lupus or Malaria, that are now proving effective for some people, not all, but some people, with COVID-19. There are more breakthroughs like that in the pipeline that we hear about every day. Testing that’s being done that shows real encouragement, to see the brilliance of our medical community in the United States, that shows you just the power and the magnitude of what we are capable of doing when we put the resources of the United States government behind an initiative. And I think you’ve seen the country come together like no time we’ve seen in generations, to confront this hidden enemy. I applaud President Trump in what he’s been doing to lead this effort, to give guidance through CDC to the states so that the states can make the best decisions, where ultimately those decisions are being made.”

“But every day the President goes to work in the White House, the President has Cabinet Secretaries coming through, the President has had people who have survived COVID-19, who have tested positive, had COVID-19, have now recovered, that have been over to the White House. And yet, you see the House of Representatives, the People’s House, shut down. You saw an effort yesterday by Nancy Pelosi, in secret at 2:30 in the morning, to drop a document to literally change the way Congress has voted for over 200 years. To go to some proxy system that had never been vetted, was not a bipartisan effort. She didn’t even work through with our Leader, Kevin McCarthy, to try to come up with a way to allow Members to talk about changing the way we vote, to have some remote process. None of that was done. They literally dropped a bill at dark of night to try to allow one person, theoretically, to have the proxy of dozens of Members of Congress. That’s not who we are. We strongly urged against it. We whipped against it yesterday. And I’m glad that Speaker Pelosi pulled that bad idea today.”

On the need to move quickly and replenish emergency PPP funding for small businesses:

“We’ve got to work together through these challenges. I think it’s so important that Congress renew the PPP program. This Paycheck Protection Program has been a lifeline to small businesses all across this country. Treasury Secretary Mnuchin just said that we’ve saved over 30 million jobs with that first tranche of PPP funding. It was so successful it ran out of money last week. We predicted that it would, and we were calling on Speaker Pelosi for weeks, not to wait until the midnight hour, but to renew that program before it expired so that those small businesses would still have the lifeline. And more importantly, the tens of millions of workers that are represented by those small businesses, because of course, at least 75% of the money has to be spent on workers. Those men and women doing these important jobs to make our economy, what was the hottest economy in the world, and what will again be the hottest economy in the world. We will get back to a strong, healthy economy. President Trump will lead that effort, but this program needed to be renewed. It shouldn’t have expired. For whatever reason, I know Speaker Pelosi and some of her allies were actually using this as leverage. They used that term. They said, ‘it’s leverage to try to get other things.’ This isn’t the time to be playing political games. This should have been done weeks ago. These millions of families who are wondering whether or not they’re going to have a job to go back to, should not be left in limbo.

“We set up a portal at republicanwhip.gov/PPP where over 400 small businesses across the country have now signed up and told us, shared their stories with us, just what the PPP would mean to them that were denied the ability to get that funding. They talked about, in many cases, family-owned businesses that were about to go under and some that are unfortunately going bankrupt today, that are laying off millions of people this week that wouldn’t have laid them off if that funding was in place today. So, while it’s so good that we’re going to be renewing this program tomorrow and putting that additional injection of hundreds of billions of dollars into the program, the week-long that we went without it happening because the Speaker decided to play games, cost millions of people their jobs. Let’s not let that happen again. Let’s continue to work together to achieve what is so important for so many families, and that is economic security with health security at the same time.”

On coming together as a community to recover from the Coronavirus:

“I’ve talked to health experts from all around the country, I’ve talked to some of the biggest hospitals in New Orleans who are doing such a heroic job with those men and women in the hospitals, the doctors, and nurses, and all the other professionals that are taking care of people in New Orleans and so many other cities as they’re confronting this challenge. They said there are smarter ways that we can go back to our economy that we had before, where businesses can open up again. Recognizing that there’s still going to be social distancing, recognizing that we’re going to take bigger precautions. Maybe they’re going to have a thermometer where they check your temperature before you go into a building, or before you go into a work establishment and make sure that if somebody’s got a high temperature, over 100 degrees, you go and test them. There are a lot of other things that you can do to get this economy going again, but we need to get it done soon, and I applaud what the President has done to confront this. And I’ll just finish up on this, we see great stories every day of what people are doing heroically, getting creative to try to find cures, getting creative to try to bring some of that supply chain that Liz talked about back from China so that we don’t have to rely on China for our PPE. We can focus on holding China accountable for what they did to hide from the entire world what was going on with COVID-19 when it started in Wuhan.