Whip Scalise blasted Speaker Pelosi for her baseless calls for fairness in the Senate impeachment trial after the unprecedented lack of due process afforded to President Trump during the proceedings in the House. It’s clear that impeachment was a Democrat scheme to stain President Trump’s legacy and hurt him at the polls. Now, it’s time to move on and focus on things that really matter to the American people. 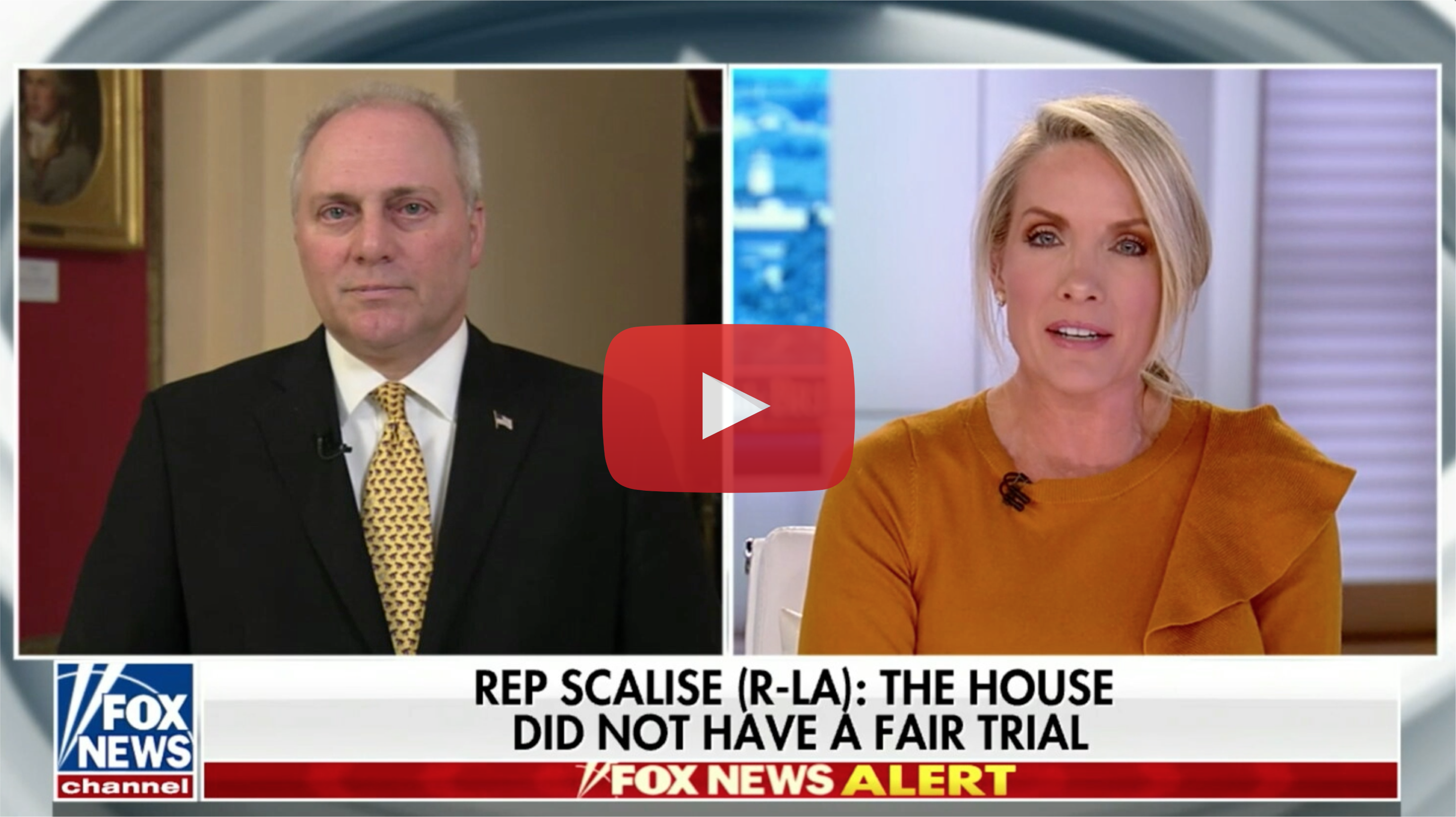 On Speaker Pelosi attempting to use the Senate to clean up her partisan impeachment mess:

“I think most people in the country, first of all, didn’t think that [Democrats] should have gone down the road of impeachment; Pelosi was beholden to the radical left. But now that they’ve done this, let’s move on and let’s focus on things that really matter – lowering drug prices, addressing other issues. But, they had no case. They had such a weak case in the House, they’re sending over to the Senate. And you can even see Pelosi almost encouraging the Senate to mop up the mess of the House, but that’s not their job.”

“What [Congressman Jeffries] is acknowledging is that the House did not have a fair trial. Everybody that looked at it objectively said it, [Democrats] actually broke House rules by denying the minority the ability to call our own witnesses and have our own day of hearings. Pelosi denied that. So, they didn’t want a fair trial in the House, but they said it was because of expediency and they said they have to do it quickly. And then as soon as it passes, Pelosi holds the papers for weeks. Again, it’s not the Senate’s job to mop up the mess of the House – the fact that they didn’t run a fair trial. If they wanted John Bolton, Dana, they could have subpoenaed John Bolton. They didn’t. And so clearly, they didn’t want him to come testify.”

On impeachment becoming a political stain on Speaker Pelosi’s legacy:

“I’m sure if you would have asked the question, ‘Do you think that Congress should be spending all it’s time impeaching and harassing the President, versus focusing on lowering drug prices, passing the USMCA trade deal to create more jobs?’ I think the answer would be even higher than that 66% saying yes [on bringing Bolton to testify]. Stop the personal harassment, this political vendetta that Pelosi even admitted over the weekend. It’s about trying to stain the legacy of the President. Frankly, it’s Pelosi’s legacy that will be impeachment now, not President Trump’s. President Trump is focusing on getting the economy back on track.”

On Speaker Pelosi refusing to work with President Trump on anything that would benefit hardworking American families:

“Well, there are real things [we could get done] and obviously you start with USMCA. We were able to pass that even in the middle of impeachment. It should have been passed and become law months ago. Six months ago, people across this country would have been getting better trade deals. People of Wisconsin would be able to sell their dairy products to Canada, for example. But, that didn’t happen because of impeachment. We had a bipartisan agreement on lowering drug prices, where every Democrat and every Republican on the committee of jurisdiction came together and passed it.”

“[The unanimous bills passed out of the Energy & Commerce Committee to lower drug prices that Pelosi blocked] should [move forward]. It should have happened months ago. The President said he would have signed the bill. Families in America would be paying lower drug prices today, but Pelosi wouldn’t bring that [to the House Floor] because of impeachment. I hope she does in the future. But she hasn’t shown an ability to want to work with the President to do anything that’s good for the country if it involves the President having another victory that he can claim.”