WASHINGTON, D.C.—House Majority Whip Steve Scalise (R-La.) joined Fox News Channel’s America’s Newsroom to discuss the ongoing negotiations to secure our nation’s borders. Whip Scalise stressed the fact that the migrant caravan has been found to have at least 600 known convicted criminals attempting to enter our country, so Democrats should join Republicans in seeking to keep our country safe. 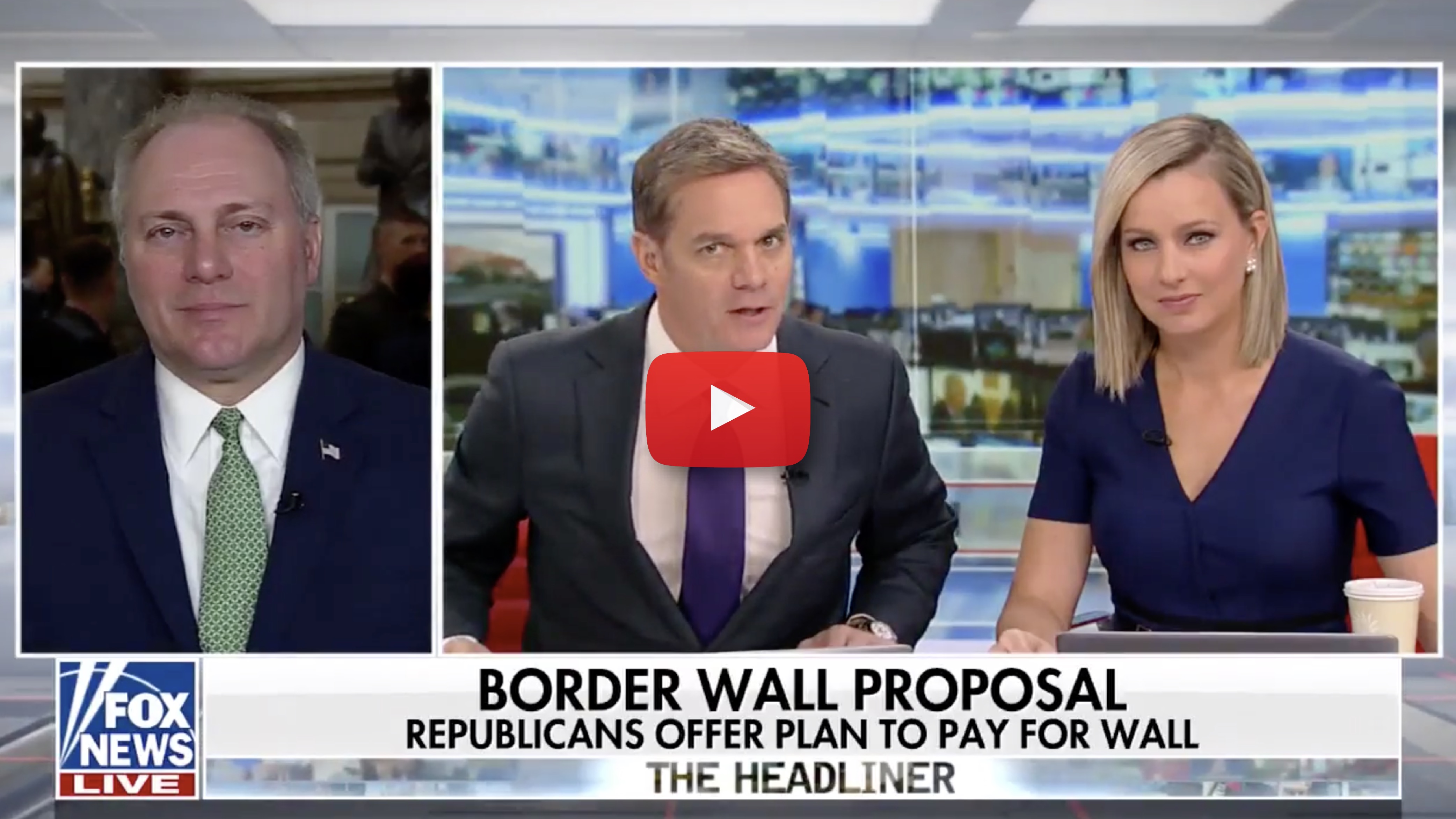 On the importance of securing the border:

“What President Trump has talked about is that he needs $5 billion right now to secure the border. It is a full border security package, including building the wall, including technology, making sure that our border patrol agents have the tools they need. You just saw in the last few days they’re being attacked and assaulted by some of the people in this caravan and the President needs to secure the border. I think It is important for all Americans that we get this done.”

On the potential for another ‘Schumer Shutdown:’

“Well, Chuck Schumer is still burned from the last time he shut the government down and it didn’t work for him then. It is not going to work for him now because people know. They see this threat at the border.

“Look at this caravan. There are already more than 600 known convicted criminals in the caravan. They just arrested another MS-13 gang member two days ago as part of this caravan and President Trump has said, ‘I need the money to fully secure the border.’ Sure, the first $1.5 billion is out there being spent. That’s only a small portion of what it takes to secure the entire American border. If Chuck Schumer wants to take the position that he is willing to shut the government down because he doesn’t want to secure America’s border, people see what’s happening right now and know what is at stake. He will lose that shutdown like he lost the last shutdown.

“Hopefully that doesn’t happen. We don’t want a shutdown. We want to make sure we can secure America’s border. President Trump has laid out a concrete plan that makes a lot of sense to get this done. Let’s go and see a bipartisan agreement to secure America’s border especially at a time when we see the assault coming from known criminals. Every single day on average our Department of Homeland Security stops 10 known terrorists from entering this country. Every single day.

“…We’ve laid out a number of different options for Comey to come in. You don’t get to decide whether or not you want to comply with a compelling order to come and testify before Congress. Ironically, in his tweet he mentions transparency. The whole idea of getting him to come and testify is to be transparent with the American people—not through leaks which Comey is good at—but being sworn in under oath and testifying and telling the truth to the American people about what’s going on. Is this a witch hunt? Is this targeted? What is really happening? The only way to get true transparency is not through him trying to leak stuff and write books, it’s about swearing him in under oath and getting an honest conversation, getting the facts to the American people.”

On standing up to Russian aggression in Ukraine:

“Well, regardless of whether he meets with him or not clearly there is a lot of diplomacy going on. What Russia is trying to do with our friends in the Ukraine is wrong and we’re standing up against it. I’m glad that President Trump is standing up to Russia and standing with our friends in the Ukraine. We didn’t see that from the previous Administration. I’m glad we’re seeing it now. Let’s bring more of the weight of other countries in the world against what Russia’s aggression is doing. It has to stop. Let’s back the Ukrainians and I think the President will do that whether he meets in person [with Putin] or whether Secretary Pompeo and others … bring more countries to bear [at the UN].”