WASHINGTON, D.C.— Majority Whip Steve Scalise (R-LA) joined MSNBC’s “Morning Joe” this morning to discuss how after seven years of Americans suffering under the failed Obamacare law, the time to provide relief from its collapse through repealing and replacing it is now. Scalise noted that under the House’s American Health Care Act, premiums, taxes, and the deficit are lowered, as Washington stops mandating to folks the health care choices they can and cannot make for their families. 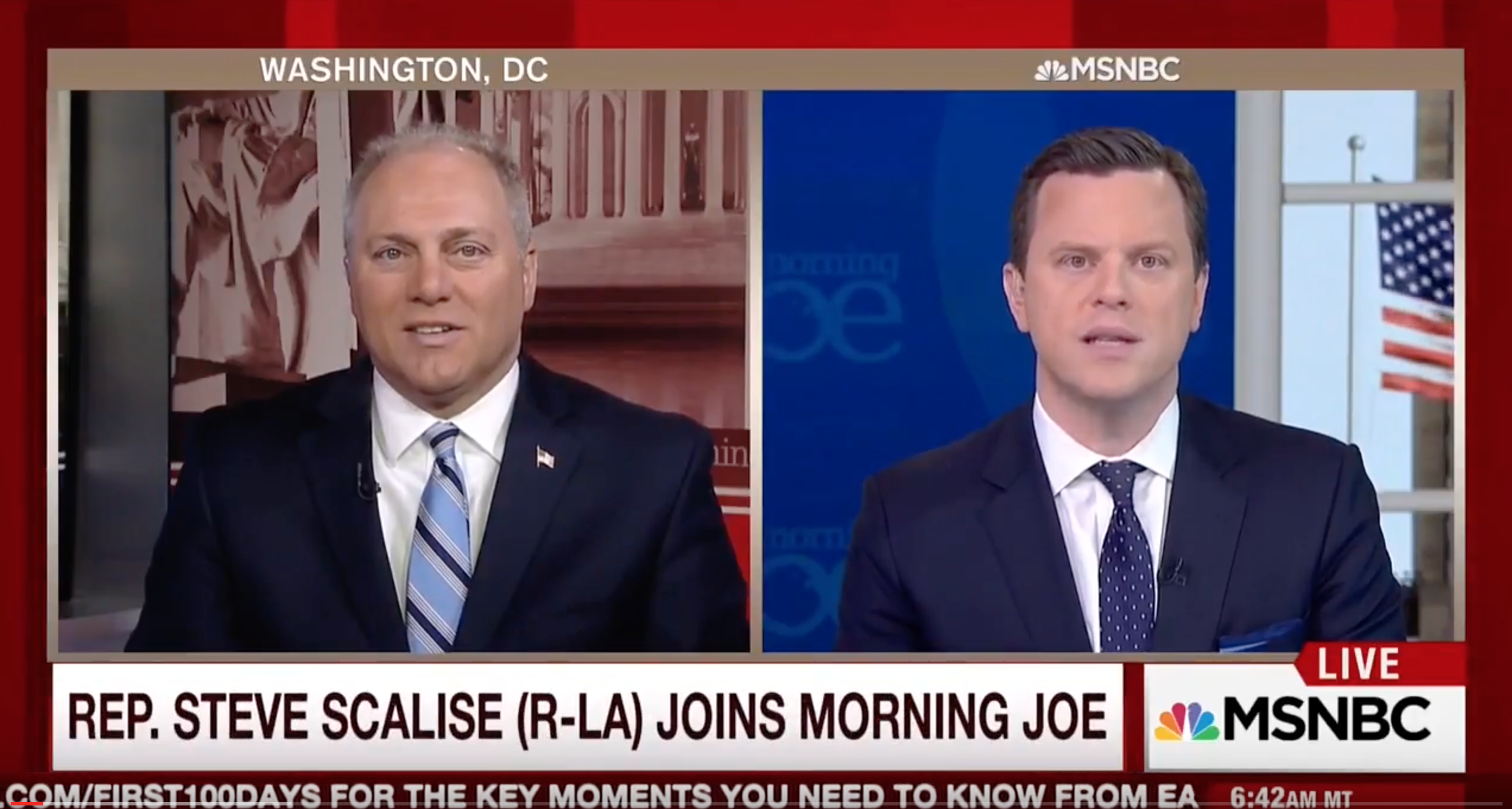 Click here or on the image above to watch the full interview.
On the CBO estimate:

“I think one thing we’re all focused on is this idea of just letting Obamacare continue on a death spiral. It might be good politically, but it’s not the right thing to do responsibly, andwe committed that we would actually rescue people from Obamacare and we’re working through the final details of getting that done. And I think if you look at the CBO score, it confirms the biggest things we’ve always said that our plan will actually give you freedom. When they said 14 million people lose coverage, not one person loses coverage. They say 14 million people if given the choice would walk away from Obamacare, which means it confirms how bad Obamacare is. Our plan lowers premiums, our plan actually cuts taxes for working families, and it reduces the deficit. So those are the things we have been talking about for years, this isn’t just something that came up over the last few weeks; we’ve been talking about these ideas for years. We put this blueprint in place in our Better Way agenda and the voters said that’s what we want to do.

“Go look at the CBO score, because, one thing, CBO even acknowledges they’re not allowed to look at all of the things Tom Price can do as Secretary of HHS. If you read Obamacare, there’s about 1,400 different places in the law where it says that the Secretary of HHS shall or may make rules to change the health care marketplace.1,400 different powers that the Secretary is given–there’s a lot of things that the Secretary can now do to go and rebuild a healthy health care marketplace that has been destroyed by Obamacare. And, in fact, Secretary Price is working on those things. Those will help lower costs, and CBO, by their own admission can’t look at any those.”

On the need to repeal and replace Obamacare now:

“We’ve been waiting seven years. Some people are saying, ‘why is it taking this long?’ So I guess when some people are saying it goes too far and some say it doesn’t do enough, you’re probably hitting the sweet spot. What we’re doing is, number one, we’re pulling in a lot of ideas that have been passed through the House for years. The idea of strengthening Health Savings Accounts, everybody recognizes that actually bolsters the marketplace.”

On the broad support for the bill:

“The problem with Obamacare is you can’t fix it or tweak it around the edges. The idea of Obamacare is unelected bureaucrats in Washington tell you what you can and can’t buy.“A number of Freedom Caucus members like what we’re doing, and you look at the committees it went through—every Freedom Caucus member that was on Energy and Commerce and Ways and Means Committee voted for this bill. It doesn’t mean that they’re not still trying to negotiate some final changes. But the bulk of this bill they say is a good bill that achieves the things we want to do is putting people back in charge of their health care decisions, getting government bureaucrats out, and lowering costs.”