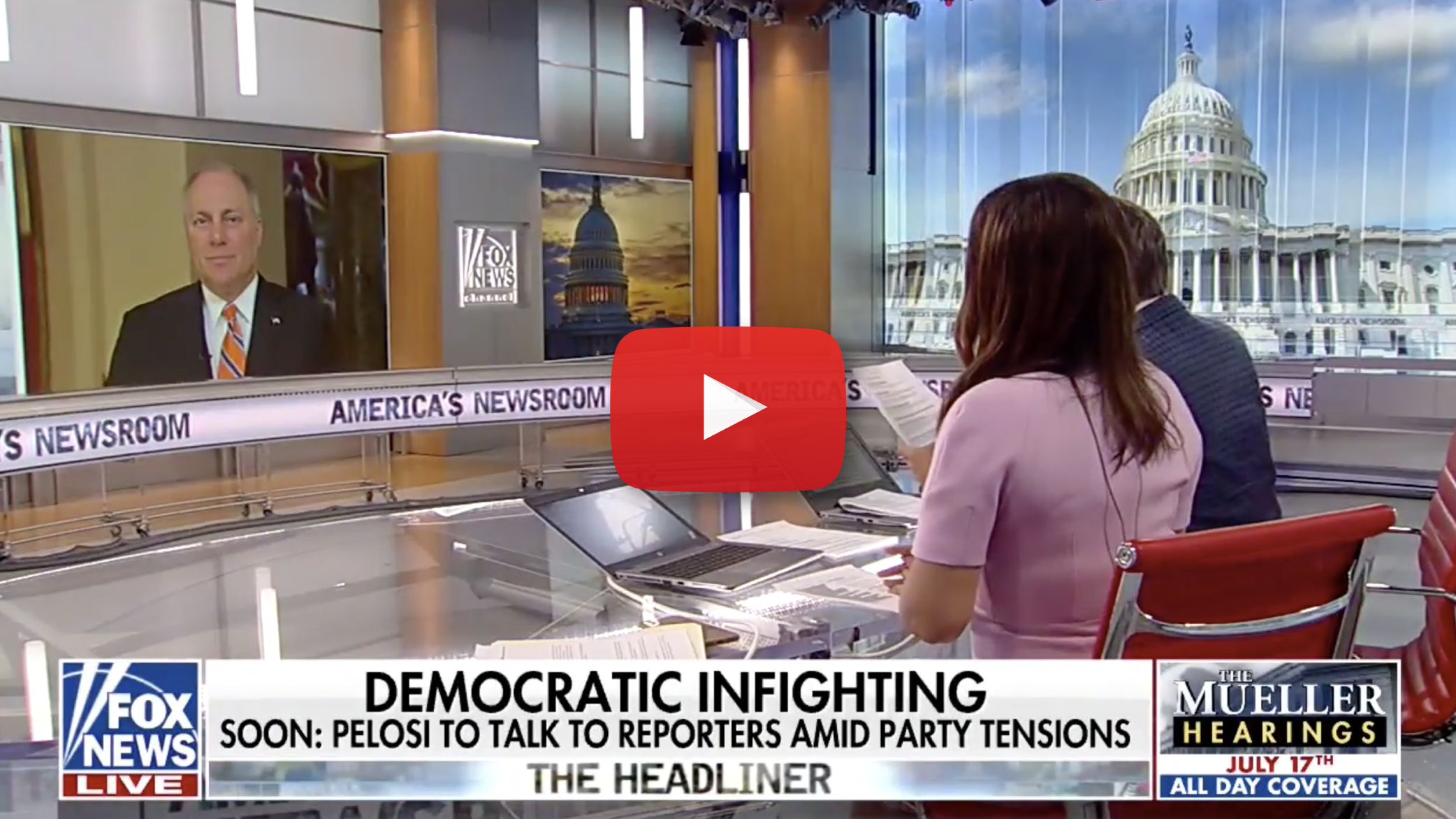 Click here or on the image above to watch the interview.
On Speaker Pelosi losing control of her caucus:

“Well, it’s ugly and getting uglier. You are seeing this fight between the far left socialists and liberals. It used to be in the Democrat Party, a fight between liberals and moderates. There are no moderates left. It’s literally liberals versus socialists and the socialists are winning. But for Nancy Pelosi to think that she can silence AOC and these other far left socialists just shows that she’s out of touch with whats happening in her own conference. I think that is shocking a lot of people because she used to control with an iron fist.”

“Yea, I think she is completely misreading just how much of a grip these far left socialist have on her conference. Look AOC is threatening some of the liberals that she is going to run somebody in their primary if they vote for mainstream policies. I mean a lot of them ran saying they were going to be pro-life, pro-gun and anti-Pelosi. And they’re all voting to allow a baby to be murdered after it’s born alive. They’re voting to raise taxes. They’re voting to take away your gun rights and they’re voting down the line with Nancy Pelosi. And yet that’s not enough for AOC and the socialists. They’re having this internal struggle. It’s starting to play out publicly. But it just shows you, you know, they ran and Pelosi took the gavel thinking she could appeal to middle America. Middle America is looking at this going, ‘Wait a minute, we are not a socialist nation. We are still a center right nation.'”

On Rep. Ocasio-Cortez’s complaints that her work in Congress is hard:

“Well it’s always been about [Rep. Ocasio-Cortez] and this idea that she’s going to promote socialism, but to her earlier interview that y’all played. For her to say that this work is hard, that they’re keeping her busy. Being a member of Congress, there is a lot of hard work to do. There are a lot of meetings, committee meetings, hearings. They should be doing the work of the American people and if she thinks that’s a little too hard, then let me tell you that there are a lot of folks out there, hard working families that go to work everyday, and work two jobs that are looking at this going, ‘Why don’t you start focusing on us and the things that are broken in this country instead of trying to go after Donald Trump everyday and having these little internal fights because you want more power?’

“It’s not about power. It’s about fixing the broken immigration system where we have a crisis at the border. It’s helping get more opportunities to lower income people to get into the middle class. And instead of bashing the policies of Donald Trump that are working, they ought to be working with Donald Trump to do things that are getting our economy back on track.”

On the preparations in Louisiana for Tropical Storm Barry:

“A lot of preparations are being made. I spoke to the Mayor of New Orleans yesterday, the Governor as well. The head of the Corps of Engineers about the levees, their structural integrity. Especially when you look at the height of the Mississippi River right now, it’s at some of the highest levels it’s been. It’s a real concern that we are watching.

“I spoke to the President this morning, in fact, about this. The President is well aware and willing to do whatever needs to be done at the federal level to make sure that people are safe. Hopefully, in a case like this you prepare for the worst, but hope for the best. We are saying a lot of prayers, but also doing a lot of preparation. I just urge local people in and around the city of New Orleans and towards Lafayette, listen to your local leaders when your local leaders tell you what you need to do. If it’s time for an evacuation, be prepared to protect your family.”