WASHINGTON, D.C.—House Republican Whip Steve Scalise (R-La.) joined Fox News Channel’s Hannity to discuss Democrats’ impeachment charade which was on full display during their first public hearing yesterday. Whip Scalise highlighted how neither of Democrats’ star witnesses had any firsthand knowledge and relied on hearsay for their testimony. He blasted Democrats for their unbelievable attempt to base impeachment off of second, third, and even fourth-hand information.

Meanwhile, as Democrats focus exclusively on their hyper-partisan impeachment scam, our troops don’t have the equipment they need, prescription drug prices haven’t been lowered, and the southern border is not secure. American workers and families deserve better. 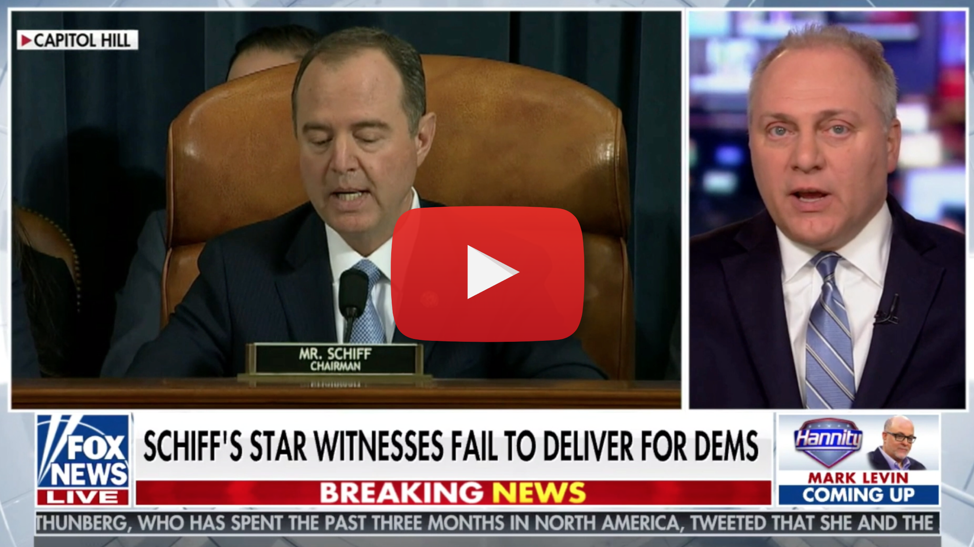 On Democrats lowering the bar for the impeachment of a sitting president by using two witnesses with no firsthand knowledge of the situation in question:

“No, Sean, this was a real bad day for Adam Schiff and this whole charade, this witch hunt that they’ve been promoting for months now. And if you look, and I know you showed some of these clips, when John Ratcliffe actually asked the two star witnesses – these were the first witnesses that the Democrats brought out to make their case – he said, ‘can either of you name an impeachable offense?’ And dead silence, like you saw.

“You know, you had so many other cases. Jim Jordan showed these second-hand, third-hand, fourth-hand – these career bureaucrats who I’m sure they’ve studied Ukraine policy for decades. But the bottom line is, there’s only one person that sets foreign policy for the United States of America and that’s our Commander in Chief, Donald Trump.

“And so, ultimately, their job is to carry that out. And instead, they’re trying to block his foreign policy which has been successful, selling Javelin missiles so that the Ukrainians can actually stand up to Russia – something Barack Obama and Joe Biden wouldn’t do.

“So, Trump stood up to Russia and helped Ukraine when Biden and Obama wouldn’t.”

On Democrats choosing to focus exclusively on impeachment rather than pursue bipartisan solutions for American families:

“…A lot of these Democrats that are in swing districts where President Trump was elected [are nervous about the impeachment witch hunt backfiring]. And he’s going to get reelected again next year because he’s been focusing on the things families care about – lowering drug prices, getting our economy back on track, higher wages in people’s paychecks.

“And [Democrats] want to impeach the President not because he did anything wrong, their star witnesses literally couldn’t name a single thing, but because they disagree with the results of the election. That’s not why you have impeachment. I think that was on full display today.”