WASHINGTON, D.C.—House Republican Whip Steve Scalise (R-La.) joined ABC News’ This Week with George Stephanopoulos to discuss the dire reality facing struggling students if Democrat leaders fail to step up, follow the science, and safely reopen schools for in-person learning now. Whip Scalise outlined how CDC guidance has made it clear that schools can safely reopen for in-person learning and stressed the importance of first effectively spending the remaining $1 trillion from previous COVID packages to help teachers safely instruct students in-person. Whip Scalise also noted that 95% of the school funding in the proposed Biden COVID bill is not set to be spent until 2022. 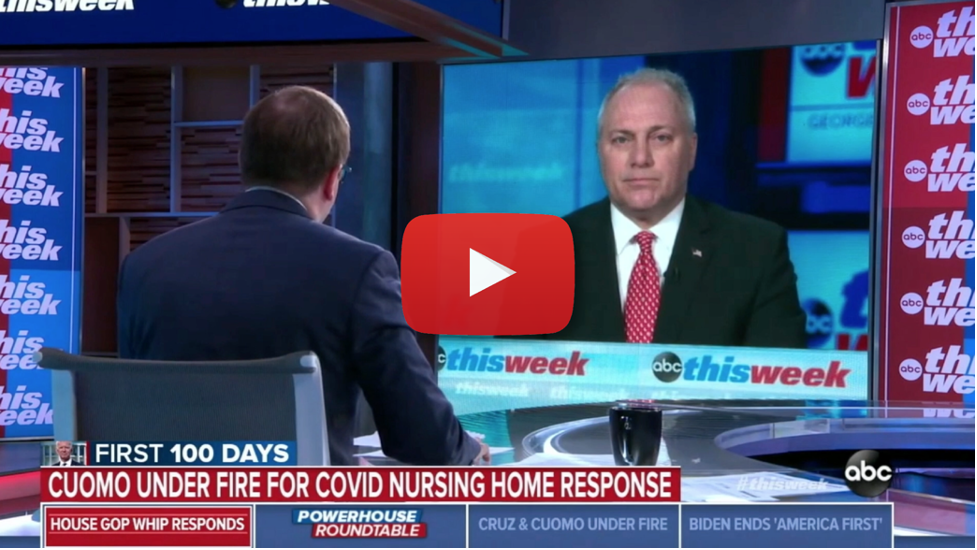 Highlights from the interview:

On the need to follow the science and safely reopen schools for in-person learning to protect struggling students:

“The first thing that the President can do is give strong guidance and follow the science. There’s so much science out there that says that this is hurting kids, millions of kids in America right now, that are not getting in-classroom learning every day. And, again, you look at CDC guidance, you can look at the American Academy of Pediatrics, they all lay out how you can safely reopen schools. About 40 percent of children in America today are learning in schools. So, you don’t have to reinvent the wheel. Those are in hot spots and places where the virus is not as serious.

“But if you look at what the priorities should be, it should be the children. And that’s not the case because right now you can see, as the unions have stepped up and said that they don’t want in-classroom learning, you’ve seen the White House pressure the CDC to reverse guidance, which was very clear.

“But this money idea, by the way, that you have to wait until the money comes out, Jon, that’s not the case. There’s over $60 billion still remaining in previous relief packages specifically for reopening schools. The money’s there. This idea that you have to pass more money – the Congressional Budget Office said the money in this relief package moving through Congress this next week, that money will not even be able to be spent, 95 percent of it won’t even be able to be spent until 2022. So, do they really want to pass a bill that’s going to delay reopening schools even more? Our kids can’t wait. They need to be in the classroom today. The science says they can be in the classroom today. The question is, is the will there for some politicians in Washington who are bowing to the teachers’ unions right now? The first priority should be the kids. The science says they can be and need to be in the classroom. There’s devastating impact.”

“I strongly agree that education should be run at the local school system. In fact, I had a call just this week with hundreds of parents around the country who are leaders in their local communities at getting schools reopened. This was a wide swath, Republicans, Democrats, Independents, parents who care about their children and demand that schools reopen. But what Jen Psaki just said is, I think, the biggest concern, that is they’re saying they want to pass over $100 billion of new money that’s not even tied to schools reopening.

“So, the real question is, look, my colleague, Ashley Hinson from Iowa, had a bill that would say, if they get new money, it has to be tied to reopening schools. I think that’s what parents are demanding all across this country. And yet they rejected that proposal. So, the question remains, why do they need hundreds of billions of dollars of new money from the federal government if they won’t reopen schools? There’s money out there already. There’s over a trillion dollars in relief package money that’s still available across the board without this bill, this almost $2 trillion bill that even Larry Summers said would wreck our economy. So, let’s target the money. But this idea that Washington should be giving out 100-plus billion of new money to schools and not even requiring them to reopen, that’s an insult to those children who are demanding that they go back to school.”

“Well, Jon, you don’t have to be a good pollster in Washington to ask the question, ‘Hey, would you like the federal government to send you a $3,500 check?’ Of course, the answer is going to be yes. If you said, ‘Do you want us to borrow that money from your children?’ Because that’s what this is – I think their answer might be a lot different. And especially if you told them the fact that there’s over a trillion dollars of money unspent from previous relief bills that were bipartisan. The money’s still sitting in a bank account and we’re going to pass $1.9 trillion of additional spending to bail out failed states, to raise the minimum wage? What does that have to do with COVID? It should be focused on helping families and small businesses who are struggling, not bankrupting our children.”

“Well, first of all, I wrote a Wall Street Journal [opinion piece] about where I think the responsibility lays for January 6th. And surely, there’s a lot of blame to go around. But at the end of the day, the people who stormed the Capitol on January 6th, it was a disgrace. And they need to be held accountable. And in fact, over 180 have already been arrested. And I know the FBI’s working to root out every person who broke into the Capitol, who attacked police. There’s no place for that.”

“Well, again, you could go back and look at the impeachment trial, the second impeachment trial – it seems like all they’ve done since the day he walked into office was try to impeach him – but, again, when you look at that trial, they ran a clip of pretty much every United States Senator who voted to impeach President Trump who talked about things like ‘Go and fight like hell’ and other things like that. Look, President Trump has denounced what happened, and I think everybody should have been unequivocal in their denouncing of what happened, not only on January 6th but during the summer, when they were burning down cities, shooting cops, beating people in the streets. You saw the left denouncing January 6th, as we did. They didn’t denounce what happened during the summer. So, let’s be [consistent] across the board and say anybody who resorts to violence to settle political disputes, there’s no place for that in America and it should be disputed unequivocally.”

“Look, Joe Biden’s the President. There were a few states that did not follow their state laws. That’s really the dispute that you’ve seen continue on. And look, if you’re Joe Biden, you probably want to keep talking about impeachment and anything other than the fact that he’s killed millions of American energy jobs, that he continues to – they just signed the Paris Accord. It’s going to kill manufacturing jobs in America. But at the end of the day, when you look at where we are in this country, either we’re going to address the problems that happened with the election that millions of people are still concerned about. The Constitution says state legislatures set the rules for elections. That didn’t happen in a few states. And so, going forward, look, Joe Biden’s the President. But does he want to look towards what people are angry about?”

“Look, once the electors are counted, yes, he’s the legitimate President. But if you’re going to ignore the fact that there were states that did not follow their own state legislatively set laws, that’s the issue at heart that millions of people still are not happy with and don’t want to see happen again. You know, look, you can rehash the election from 2020 all day long, but there are people concerned about what the next election is going to look like. Are we going to finally get back to the way the rule of law works? And I think that’s the biggest frustration many people have, is those states that didn’t follow the law, are they going to keep doing that in the future, or are we going to finally get back to what the Constitution calls out for electing our leaders?”