WASHINGTON, D.C.—House Republican Whip Steve Scalise (R-La.) joined CNBC’s Closing Bell to discuss the ongoing COVID-19 relief negotiations in Congress. Whip Scalise emphasized that America’s response to the Coronavirus pandemic must focus on bringing the supply chain back to the United States from China, ensuring the money Congress appropriated in the CARES Act is being spent efficiently, helping people safely return to work, and safely reopening schools this fall to protect the health and well-being of students and children. 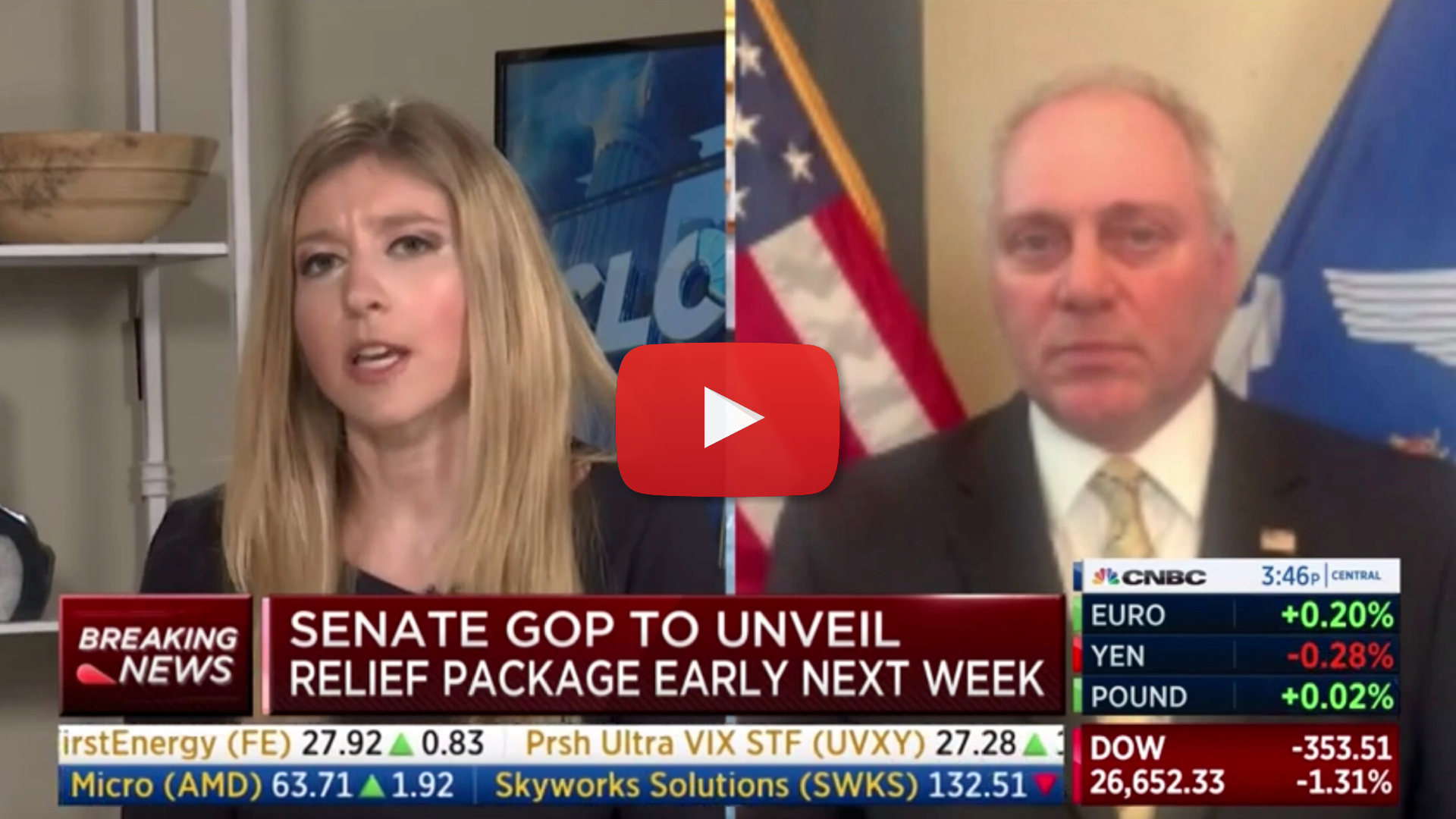 On the ongoing COVID-19 relief negotiations:

“I know President Trump’s real focus is on trying to help people safely get back to work, help safely reopen schools, and we recognize there’s still millions of Americans that are unemployed. There are millions of Americans that continue going back to work, but the one thing that’s become a problem is that, you know, we’ve seen studies about five out of six people that are getting that enhanced unemployment are actually making more money at home than they were at their job. That’s not something you want the government to literally be competing against people’s desire to go back to work. So, that’s got to be fixed, that’s been a problem for a while, but we’ve got to make sure, look, there’s hundreds of billions of dollars still out there that haven’t been spent that we appropriated for things like the Paycheck Protection Program. Even money for schools that we can make sure are more flexible to help schools buy sanitizer, and masks, to help businesses continue to do what they’ve got to do to reopen. That’s, I think, where the real focus needs to be is to help people. There’s a lot of money already out there, let’s make that money work even smarter and better to get people safely back to doing the things they did before.”

“I hear from small business owners every single day that are telling me they’ve offered jobs for people to come back to work in businesses that are safely opened again, and they’re able to get some of them back, but some of them just are telling them, ‘I’m making more money at home,’ and they’re not coming back. It’s a real problem, you know, the other side of that is there are a lot more opportunities to create jobs, and you’ve seen it in some of the industries that are expanding even in a tough time.”

On the need to bring America’s supply chain back from China:

“You know, whether its people making PPE, trying to make masks, doing other things where there’s a demand. We ought to be focused on bringing a lot of those jobs back from China because right after this pandemic broke out, as China was hiding the facts from the rest of the world, they were hoarding up all the PPE because they made almost all of it. And so, when our doctors and nurses were trying to buy it, they couldn’t find it anywhere. Why don’t we make that here in America? That would create really good jobs and it would give us more national security to be able to do that. I know President Trump has wanted incentives to help bring more of that kind of national security manufacturing back into America for pharmaceutical products, as well as for really important things like PPE. That’s something we can make in America and create good jobs in the process.”

On the need to ensure money Congress already appropriated is spent efficiently:

“There’s debate and disputes on both sides and, you know, you saw like Joe Biden just put out another $800 billion proposal. Last week, he proposed $2 trillion dollars more in these special interests kinds of Solyndra on steroids type proposals, which is not the right answer. So, both sides have disagreements. You did see us come together on the CARES Act to create the Paycheck Protection Program. That saved millions of jobs. I’ve talked to so many small business owners who wouldn’t be alive today, who wouldn’t be still holding their employees together, and their businesses together. So, it worked really well, but we did spend over $2 trillion dollars.”

“There is a concern that there’s a level that you surely have to be careful how far you go. When we look at it right now, there’s about $500 billion of that money we appropriated that still hasn’t been spent. So, I think the first thing you ought to do is look at that money, not spend more money, but say, ‘Let’s make this $500 billion work better in other places where it’s most needed.’ Because clearly, you know, if you over allocated in some areas, you look at hospitals, you look at schools that are going to need money for sanitizer and masks. Let’s make sure that the money can be used for those kinds of things and that money is still out there. Congress doesn’t need to pass another bill to appropriate that. So, I know there’s a lot of talk about that as well. That’s, you know, that’s what we’re doing. We’re here to try to work through these differences.”

On the need to safely reopen schools:

“Today, the discussion is on how to get our economy back open safely, how to safely reopen schools. And, look, the American Academy of Pediatrics just put out a really good report that not only shows how to safely reopen schools, it also talks about the damage to kids, to our 50-plus million children in school if they’re not going to school. I mean, it’s one thing to be learning at home, it’s not the same thing as learning in the classroom and it does damage to our children. We need to be well aware of that and follow the guidelines about safely reopening, not saying can we do it or not, we can of course do it. Many school systems are already putting those plans in place, everybody’s got to be pulling together to meet the needs of those children.”