WASHINGTON, D.C.— Following the House’s passage yesterday of the American Health Care Act to repeal and replace Obamacare, House Majority Whip Steve Scalise (R-La.) joined “The Story with Martha MacCallum” last night on Fox News Channel to discuss the process of gaining support for the bill, and the importance of the Senate sending it to President Trump’s desk to be signed into law. 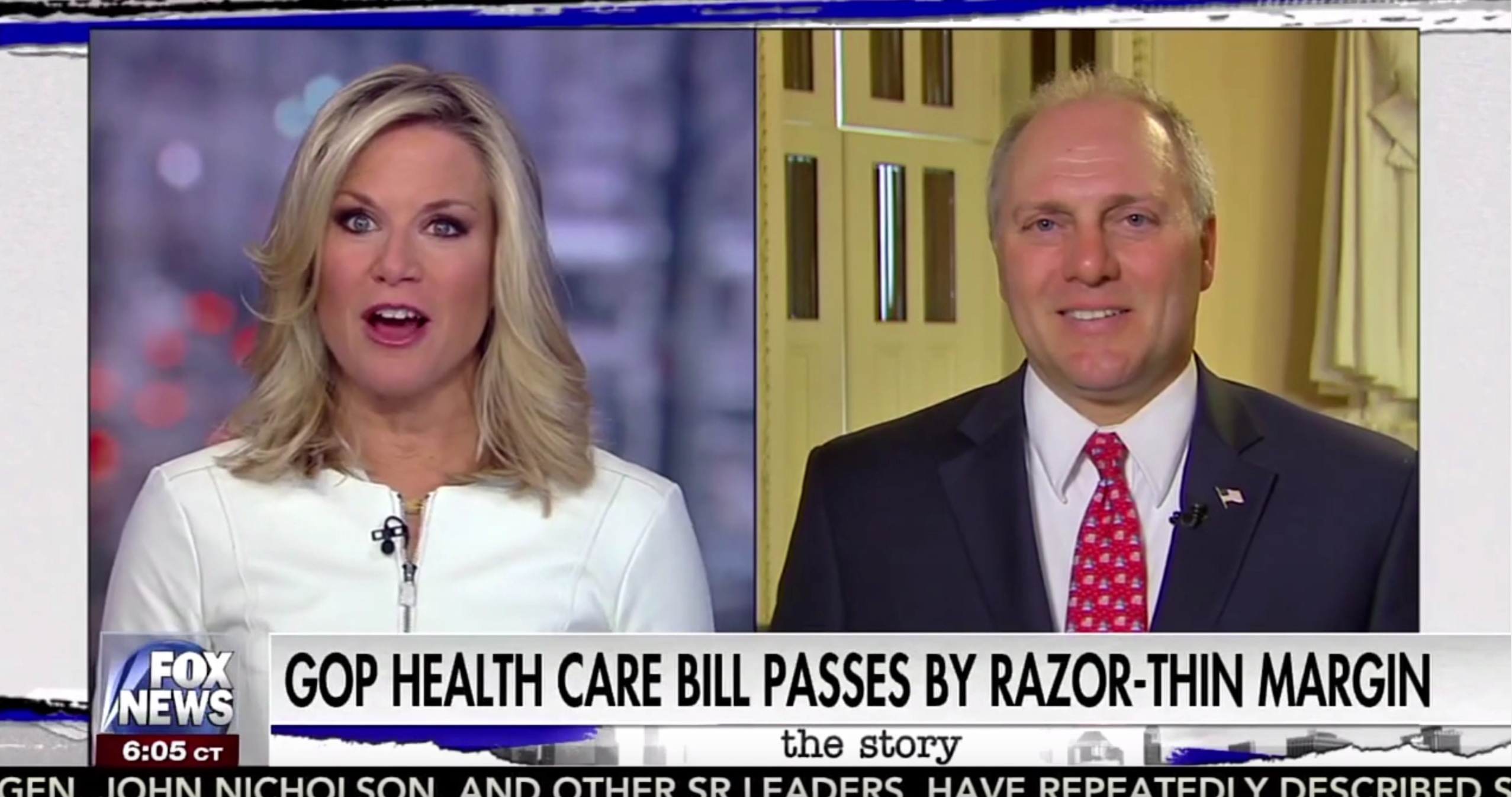 On successfully passing the bill out of the House:

“It was a lot of work, and look, all of our members in the Republican conference were working really hard to try to find a way to get to yes. We still had more work to do a few weeks ago, you know, we would have liked to seen the bill passed sooner. But the most important thing was getting it right and fulfilling this promise, and starting the process of repealing and replacing Obamacare so that we can lower premiums and put families back in charge of their health care. We worked very closely with President Trump. He was engaged from the very beginning. Vice President Pence was very hands-on. So our teams worked well together. But ultimately, every change we made to the bill over the last few weeks were focused on lowering premiums more and bringing more members on board that weren’t there, and so we had a lot of cooperation. But look, it was difficult. I always said from the beginning, failure is not an option. This is too important to the people that elected us, that want relief from Obamacare, that we had to get this done. And so I am glad we were able to pass this out of the House, and now it goes to the Senate. There’s more work to do, but I really feel good about where we are in our ability to actually get this on President Trump’s desk.”

“For all the people that said it couldn’t pass the House, I always knew that we had a path to get it out of the House and it wouldn’t be easy. But I also knew that it was going to take a lot of work, and that’s why we’re here, that’s why we ran. I’ve already talked to John Cornyn, the Senate Majority Whip and he’s already working on what they need to do in the Senate to put a similar coalition together to pass the bill.”

On the importance of Senate passage of the bill:

“I know we’ve been working with [the Senate] every step of the way and they’ve been following what we have been doing and the changes we made. We actually have to check with the Senate because a lot of the limitations of this budget reconciliation process that allows you to pass this bill will 51 votes in the senate, means you have to work with the Senate. So, if they can make more improvements to the bill, I’m all for that. I think that would continue to improve this process and we’ll see what they change, and if it’s better, we can take those changes. If not, we’ll go to our conference committee. But the ultimate goal is to get a bill on the President’s desk that lowers premiums, that puts patients back in charge of their health care decisions by repealing and replacing this broken law.”

On the urgent need to deliver relief from Obamacare:

“We were focused from the beginning on making sure that we did get it done because, like you said, when you have the House and Senate and White House, failure is not an option. You’ve got to get it done. You’ve got to follow through, and I think you saw that focus all the way through. You know, there were times when people could have given up on the process and we never did because we knew we had to get this done for a lot of reasons. But the main one is because we promised people we would give them relief from Obamacare, and so you saw that coalescing, you saw that from members from all different factions within our conference come together, and it was a really healthy process. You know, it took time, but it took over a year before Obamacare got on President Obama’s desk. In just a few weeks, we were able to get this moved through the House, and that brings it to the next step, but let’s provide relief for those families.”