Whip Scalise called on Speaker Pelosi to instead focus on holding the Chinese government accountable and safely reopening our economy to help American workers and families. Instead, Speaker Pelosi is choosing to take advantage of this crisis by playing politics and pushing Democrats’ radical socialist agenda. 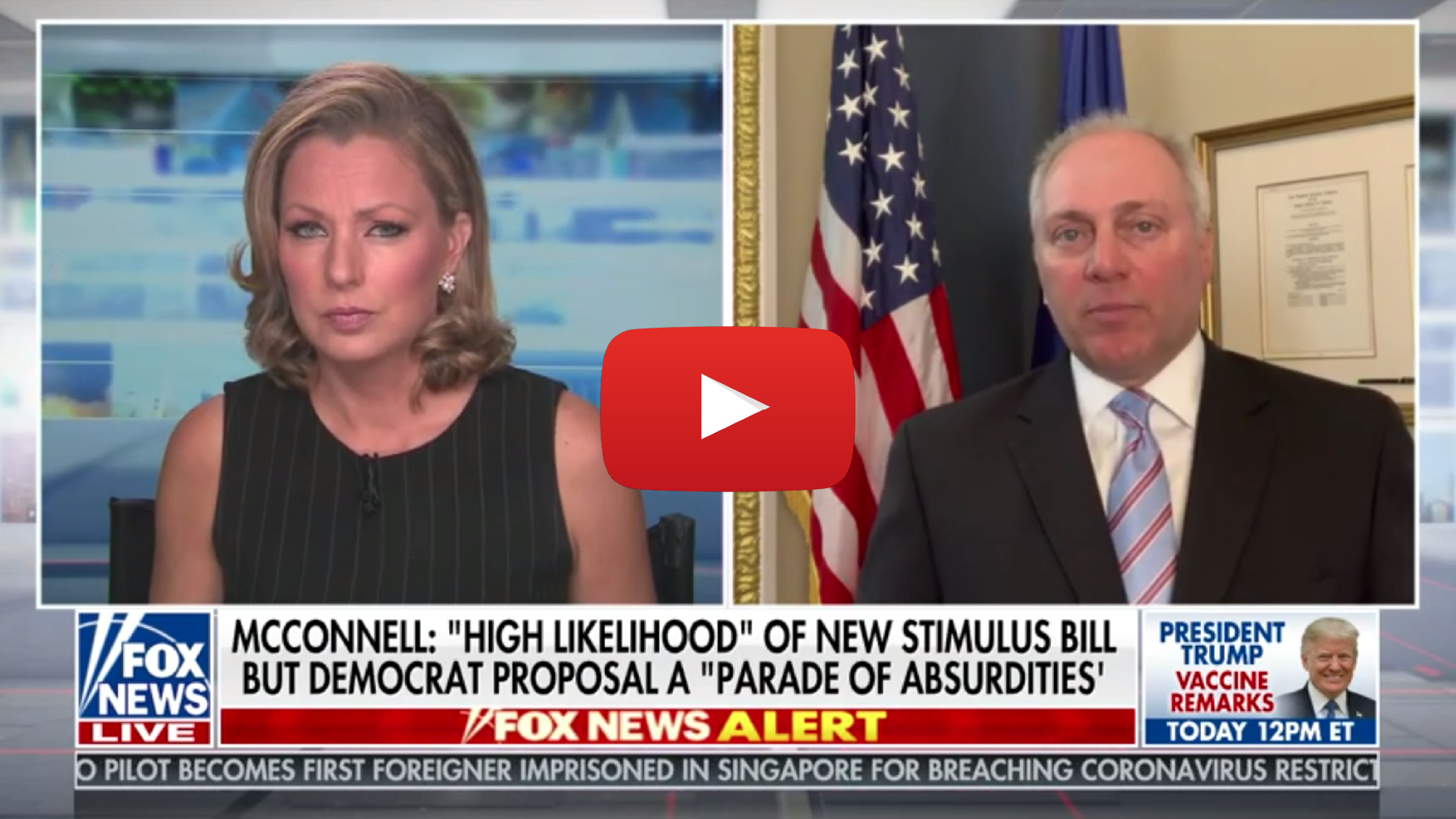 “As Senator Mitch McConnell said, [Pelosi’s bill] is dead on arrival. The President never was even consulted, they never worked with Republicans. So, clearly, Pelosi didn’t take this seriously. She wanted to just throw out a big socialist spending bill, a grab bag of all kind of crazy things like paying [illegal immigrants], doing bailouts to states that were already failed before COVID-19, to just throw $500 billion to states that already wrecked their economy. I mean, you know, why don’t we be smart about helping businesses to get back up and running, families that want to get back out and get their chance at the American dream again, and safely do that. You’re seeing so many states, by the way, safely reopening. 36 [states] have already done it. My home state of Louisiana is reopening in Phase One today, safely. People know how to go out and be around other people again in a safe way and start getting the economy going again.”

On the need to focus on holding China accountable and getting our country back on track:

“Maybe Nancy Pelosi and some of those others forgot that we’ve already voted to pass over $2 trillion in relief. Including, by the way Sandra, billions of dollars that we passed for testing. You can see every day we’re getting about 300,000 more tests a week online. We need to keep working on that. We saw the President yesterday in Pennsylvania touting a company that’s making PPE here in America, so we’re bringing a lot of that back from China. Why isn’t Nancy Pelosi working to hold China accountable? For some reason, she called China a distraction. No, China created this and hid from the world what was happening, and, by the way, they’re holding back our PPE that’s being made over in China. So we’re now making more of our own things here that can save American lives that we spend billions of dollars already that was passed in bipartisan legislation. How about they work with us on making that money work properly to get more testing, to get more PPE made in America, and to help families get back on their feet again. That’s where the focus should be, not giving hundreds of billions of dollars to failed states and billions of dollars to people that are here illegally when Americans who are sitting at home and maybe losing their job don’t want to see that happen to our economy. They know we can safely reopen.”

On balancing safety and economic health to reopen our economy:

“Nancy Pelosi wrote most of this bill in her kitchen in San Francisco. There were no hearings in Washington, there was no outreach to Republicans, so clearly, they didn’t take this seriously because they knew it wasn’t going to pass. But they did take their cues from Joe Biden. You know, whatever basement he’s in giving his occasional press conferences, he did say he wanted more than $2 trillion in the next round, and so lo and behold a bill shows up just two days ago, that’s $3 trillion. Is that any surprise? But that’s not the way you make policy, and, by the way, that doesn’t help families get back on their feet, that doesn’t help small businesses stay afloat. You’ve seen the reports, maybe 25% of all restaurants won’t reopen. There are serious things happening that are devastating people. Suicides are on the increase. We’ve got to safely reopen. Like, by the way, the 36 states that have proven how to do it. You don’t have to reinvent the wheel. There are templates out there of how to do it. CDC, just today, issued new guidelines, updated guidelines, on how to safely reopen. We need all these other states that are failing to recognize that states are doing it successfully, and by the way, they’re lowering the curve. They’re not seeing spikes in their hospitals, which was the initial concern. That’s not a concern now in those states. Let’s show other people how we can safely reopen.”

On Speaker Pelosi’s attempt to change 200 years of precedent in the U.S. House by allowing voting by proxy:

“This is a dangerous precedent. You’re talking about changing over 200 years of voting precedent in the United States House of Representatives. Where Nancy Pelosi today, again, unilaterally, she didn’t reach out and work with Republicans. She’s changing the rules of the House today so that literally just 20 Members of Congress can constitute a quorum. That’s crazy. Out of 435 elected members, we were all elected, she is now passing a rule that literally has Democrats turning their voting card over to Nancy Pelosi. How scary of a thought is that? I’m not turning my voting card over to Nancy Pelosi. I don’t know why anybody would vote today to allow that to happen to have only 20 Members on the Floor constituting a quorum to do business in the People’s House of Representatives. It’s never happened before in over 200 years, and that means through World Wars, through other pandemics, the Spanish Flu, they showed up to work. Today we’re here, by the way, we’re working safely, all the protocols of social distancing are in place, so why she chooses to do this now where she can literally hold the votes of other Members of Congress. That’s a dangerous precedent. And frankly, I wouldn’t want to have to go home and explain why I turned my card over to her, but a lot of Democrats today are considering voting for a bill that turns their voting card over to Nancy Pelosi.”