WASHINGTON, D.C. — House Republican Whip Steve Scalise (R-La.) took to the House Floor today to denounce Speaker Pelosi’s rules package designed to strip the minority of their historic rights, stop debate on important legislation, and silence the voices of the 48 percent of Americans who are represented by Republicans in the House of Representatives.

Whip Scalise pointed out that Speaker Pelosi’s rule package sets up multi-trillion-dollar, budget-busting bills like the Green New Deal to sail through the House without proper scrutiny or accounting for the damage they would do to working families. Scalise also called attention to the fact that House Democrats have stifled Republican participation in legislating, cutting the number of Republican amendments to bills allowed on the House Floor to less than 20 percent of the total. Plain and simple, Speaker Pelosi’s rules package is meant to silence conservative voices, common sense, and honest debate, and will empower liberal activists, corporate handouts, and Democrat misrule. 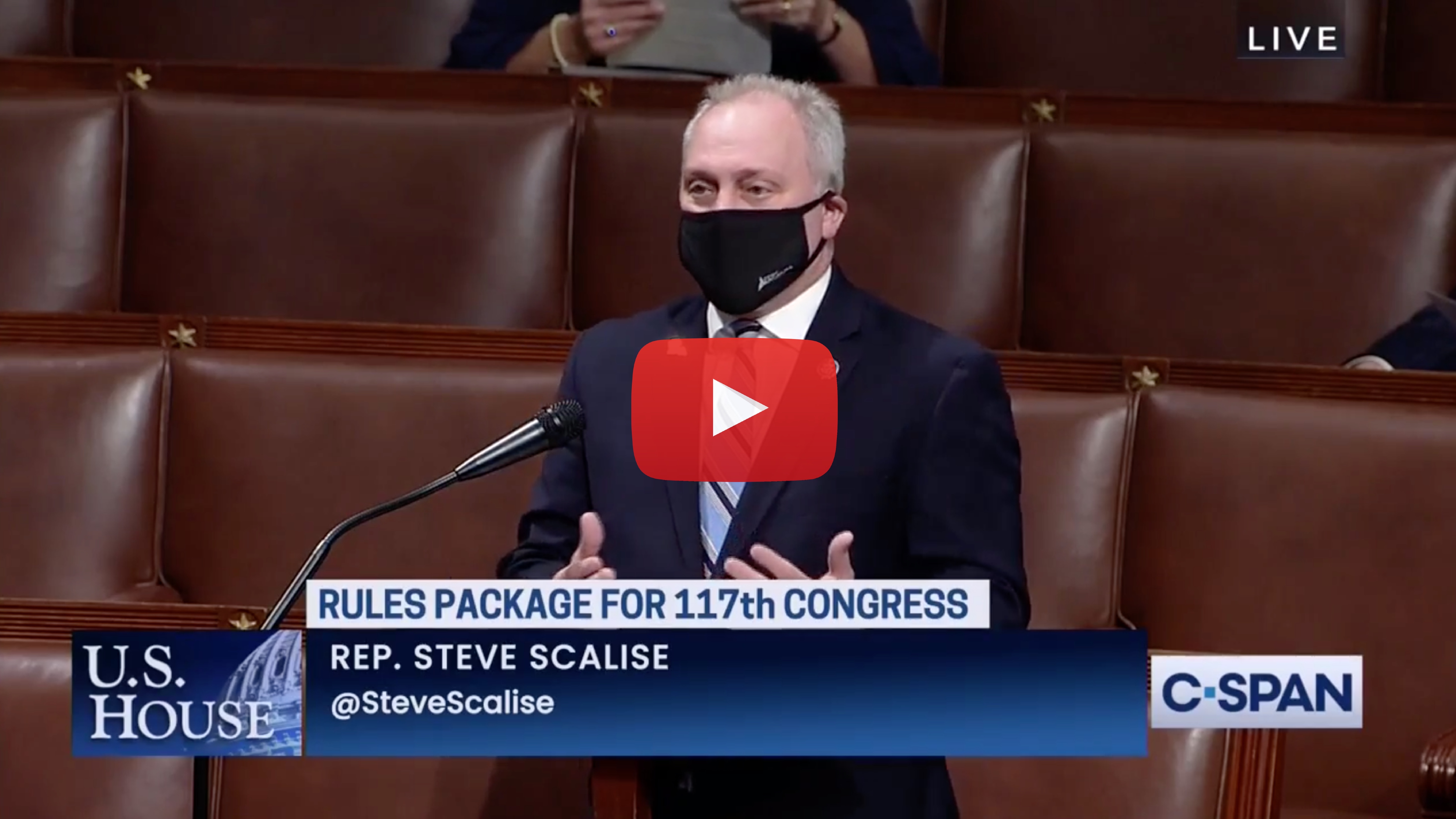 Click here or on the image above to watch the full clip.

“Madam Speaker, I rise today to strongly object to this Soviet-style rules package. If you look at some of the things that are being laid out here, it is all designed to take away the voice of 48 percent of this House chamber. This is the people’s House!

“That’s one of the great things we celebrate about serving in the United States House of Representatives — a privilege for each of us that took that oath yesterday to represent roughly 750,000 people. To bring their ideas, their hopes for America to this House floor. To debate the things that they believe in, that we believe in, that we want to fight for. And we don’t always agree. We don’t always see eye to eye on what that is, but the beauty is we get to bring those ideas here, have that debate here, and yet the rules package is attempting to strip that away, to yank away more rights for hundreds of millions of Americans to be represented on this House floor.

“That’s not who we are. That’s not what the House of Representatives is all about and yet that’s what will be voted on in this rules package.

“Just look at the Motion to Recommit. Now, if the majority were allowing us, Madam Speaker, to bring amendments to the floor on a regular basis, you might not need a Motion to Recommit. But less than 20 percent of all amendments allowed on the House floor in the last two years were Republican amendments. Less than 20 percent! When we represent almost 49 percent of the members of this body. That’s not what an open democratic institution is about. That’s unbecoming of the House of Representatives. And yet taking away that ability shows that the majority wants to shut down the debate of the other side.

“[The majority] wants to shut down the voices not just of us, but of the millions of people all across this country we represent. Think about the move to get rid of PAYGO — Pay As You Go — which had been a hallmark of Speaker Pelosi’s majority. She gets rid of that on debating things like the Green New Deal. Now, what does that tell you? That tells you that number one, they plan on bringing the Green New Deal to the House floor, but they also know that it would have devastating consequences on American families, the hardworking people.

“In fact, the ones who would be hit the hardest by [the Green New Deal] are low-income families who would end up paying thousands of dollars more in household electricity costs. And they want to hide that. So they get rid of PAYGO so that you don’t have to show what the cost to hardworking families would be for radical ideas like that.

“This not who we are. I’m a proud husband, proud father of a son and a daughter — they don’t even want you to be able to say that anymore. Let’s open up the people’s house to real honest discourse and debate. Let’s debate our difference and settle them here on the House Floor, not try to hide the views of 48 percent of this country. I oppose this Soviet-style rules package.”