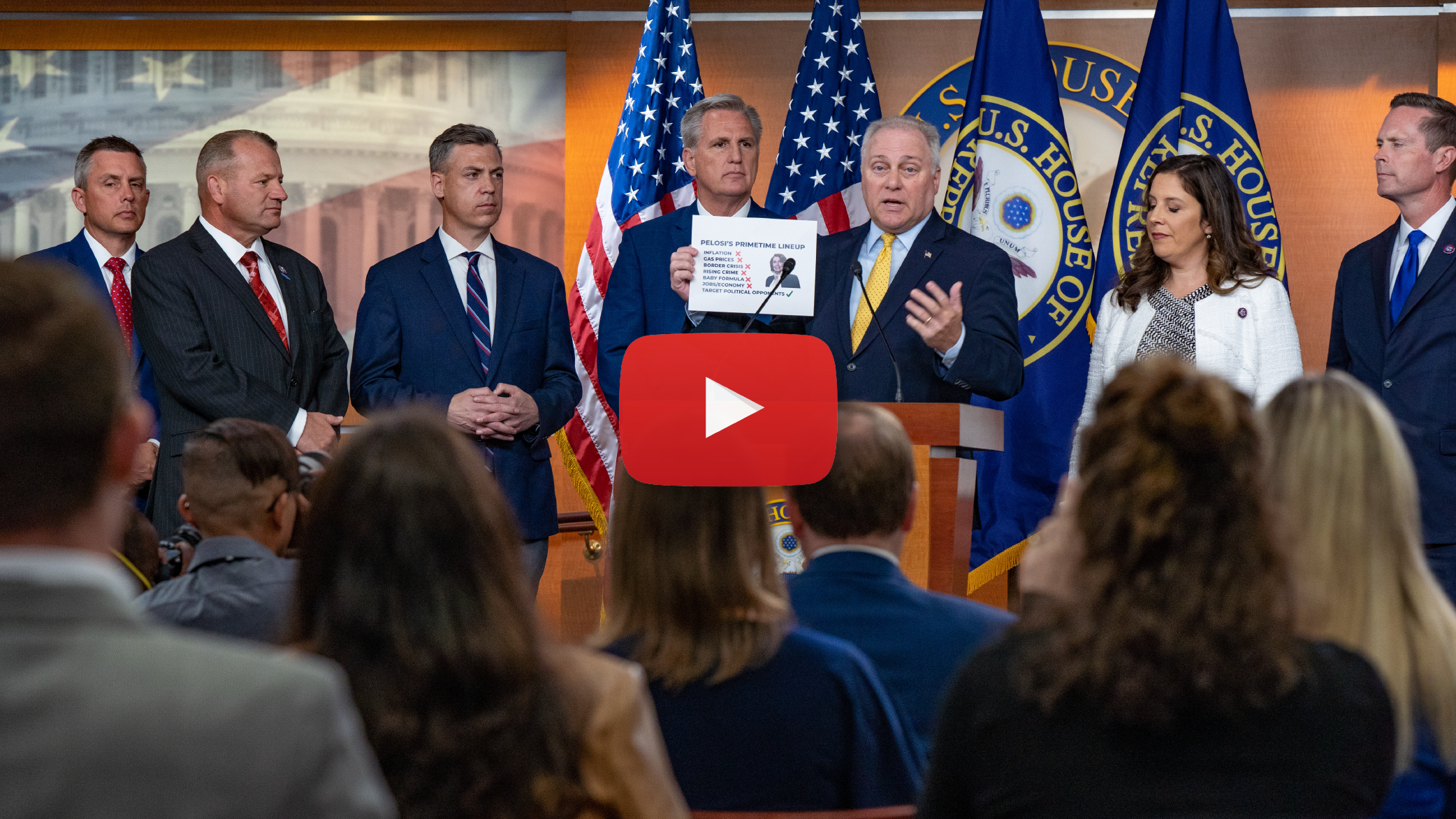 Click here or on the image above to view Whip Scalise’s remarks.
Whip Scalise’s remarks:“[Republican Study Committee Chairman] Banks just raised some very serious questions that should be answered by the January 6th Commission, but they’re not. And they’re not for a very specific reason. And that’s because [Speaker] Pelosi doesn’t want those questions to be answered. In fact, she took the unprecedented step of kicking [RSC Chairman] Banks and [Judiciary Committee Ranking Member] Jordan off of the January 6th Committee because they were going to ask those questions that a lot of people would like the answers to.“So, when you hear them talking about it’s all about getting to the truth, if they really believed in getting to the truth, they would have kept Jim Banks and Jim Jordan on the Committee to ask those questions and get the truth. But, that’s not what this has been about – it never was to [Speaker] Pelosi. It was always about politics, and if there was any doubt that it was about politics, [Speaker] Pelosi removed that doubt when she took the unprecedented step of kicking the Republicans off of the Committee that Leader McCarthy had appointed.“And so, it begs the question. As we go around the country, as I go around my district, we’re all being asked the same questions. The questions our constituents are asking is, ‘What is Congress going to do to help alleviate the problems that are hurting families in South Louisiana [and] all across the country? What [is Congress] going to do to lower inflation, to lower gas prices, [and] to secure America’s border?’ [Those are] the questions families are asking me and my colleagues around the country.“I was just on the floor a few minutes ago and asked Leader Hoyer if he would bring up a bill that we have House Republicans have put together – a broad package of legislation – to lower gas prices. And they refuse – [Speaker] Pelosi and all of her minions refuse to bring bills like that to the floor. So, as you’re watching tonight, however many watch, I think it’s important to know what primetime lineup is not included by [Speaker] Pelosi.“Is [Speaker] Pelosi going to hold a primetime hearing on inflation? I’d sure like to see that. I think a lot of Americans would. Is [Speaker] Pelosi going to hold a primetime hearing on lowering gas prices? They’ve refused to so far. They won’t even bring a bill to the floor that will lower gas prices and everybody knows what needs to happen to lower gas prices because just two years ago, we were paying about $2 a gallon at the pump, and today we’re paying way more than double that in many places – well over $5 a gallon when we know the answer, and it’s not [President] Biden going to Saudi Arabia, and begging OPEC, begging monopolies, begging dictators, begging Putin to produce more oil, when the oil we need to secure America’s energy security, as well as our economic security, is right here beneath our feet.“We’ve got the energy here, and by the way, we produce it cleaner than anywhere else in the world. And so, whatever his carbon footprint is going to be to go to fly to Saudi Arabia to talk about saving the planet by asking them to produce energy because he is beholden to the radical left who don’t want to produce energy in America. Why don’t we have a hearing on that?“Why don’t we have a hearing on the border crisis? We can maybe invite Vice President Kamala Harris who [President] Biden put in charge of it. She’s yet to go to the border. This crisis is not just at our southern border, it’s touching every community in America. The fentanyl that’s killing thousands of young kids every single year – that fentanyl is coming across our southern border because [President] Biden has turned operational control of America’s border over to drug cartels. Where’s that hearing [on] baby formula? There was just a report yesterday, that came out that said [President] Biden’s [Food and Drug Administration] knew last year that there was going to be a crisis with baby formula. He didn’t even have an FDA Commissioner until just a few months ago. He went a whole year without an FDA Commissioner and you wonder why the FDA was a rudderless ship under [President] Biden. Why don’t we have a hearing on that during prime time?“Of course, we know that this has always been about politics. Tonight, you’re going to see it’s about politics. And most importantly, the questions that [RSC Chairman] Banks raised are not going to be asked tonight and should be.”