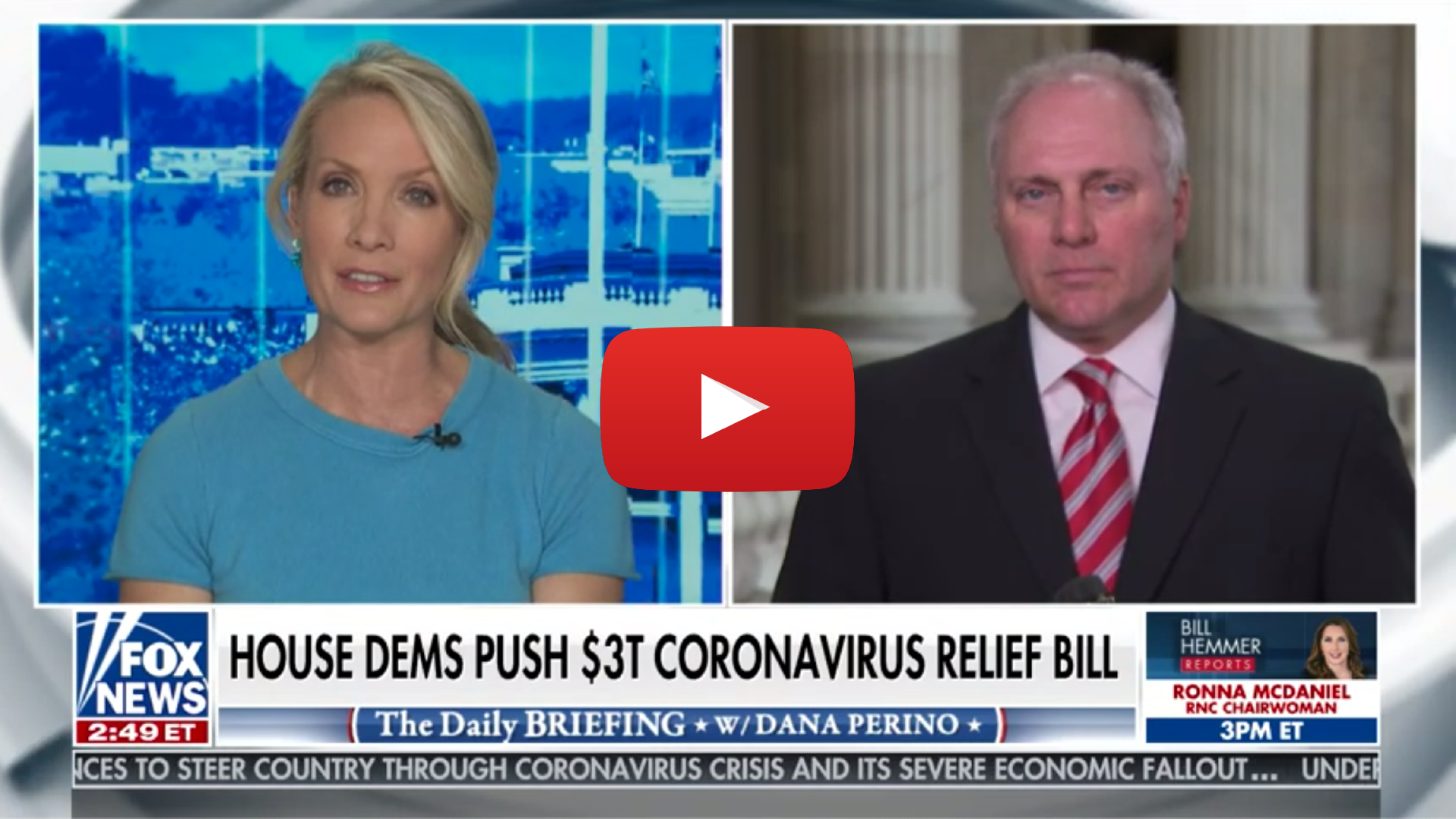 “With more than a $3 trillion price tag there [are] a lot of bad things in there, including bailouts to failed states, paying illegals, taxpayer money going to fund abortion. By the way, what does any of that have to do with getting our economy back on track and recovering from this pandemic? And so, we put a lot of money out there to help businesses stay afloat, to help families be able to pay their mortgage. But really, the focus now needs to be on safely reopening the economy. And, by the way, 36 states have already moved forward. My home state of Louisiana will be moving forward tomorrow into Phase One, there are safe ways to do it. That’s the real answer to getting things back on track, not bailing out failed states who had billions of dollars of deficits prior to COVID-19, but actually working on getting the economy going again.”

On the need to work on solutions that can move America forward and help families overcome this crisis:

“It’s devastating. Of course, Dana, the longer that parts of the economy stay shut down, the worse that’s going to be. I talk to small business owners every day who are trying to decide, you know, if it takes another couple of weeks before I can fully open, I don’t know if I can come back. That’s why we have to look at those best practices. How other people are safely reopening, you can look at states like Georgia and Florida where they’re having success, safe success reopening. They’re not seeing spikes on their hospital system. Those are the models to follow. By the way, you can look at all the money that’s already out there. There are still hundreds of billions of dollars in various programs that have already been approved by Congress that are out there, including in the Paycheck Protection Program and in so many other areas. So, why don’t we make that money work well for people as we are helping people get back to work and get back to the things they used to do, and including, you look at just the failures in our hospital system where they’re losing so much money because people aren’t getting their regular procedures done. And we’ve seen studies, the Johns Hopkins study goes on top of many other health studies that show the devastating impacts on families by being shut in – not getting mammograms, and colonoscopies, and kids not getting their normal immunities.”

On Democrats using this bill to push some of the most unimaginably liberal policies in American history:

“You look at just how this bill was drafted, Nancy Pelosi wrote it in secret in her kitchen in San Francisco. It wasn’t written with the help of Republicans, they never reached out to any Republicans in the House, Senate, or the White House. By the way, if you want to get a bill signed into law, I think we all saw Schoolhouse Rock, it does need to be worked through the entire process. So, people are tired of the show votes and these games. These are times where people should be pulling together, we did that, by the way, with the CARES Act. There’s a way that we can work together, this is not that answer. And oh, by the way, in addition to that vote tomorrow on the $3 trillion socialist grab bag bill, they also are trying to change over 200 years of tradition by going to proxy voting. Where people would vote remotely in a bill that literally just got filed yesterday and probably most Democrats have never even seen that bill. They would even allow subpoenas by proxy. You look at the Flynn scandal, can you imagine if [Democrats] could subpoena people by proxy?”

“We’re sure working to [have all Republicans vote against this bill], because this isn’t the way to run the House. We’re the People’s House, the Senate is on the Floor debating bills, the House should be doing their work as well.”