WASHINGTON, D.C.—House Republican Whip Steve Scalise (R-La.) joined Fox News Channel’s Hannity to discuss Speaker Pelosi’s proxy voting scheme that upends over 200 years of precedent with serious constitutional and institutional repercussions. Whip Scalise blasted Speaker Pelosi for exploiting the Coronavirus crisis to ram through a partisan rule change for her own political gain, when the House should be returning to work to lead by example and show the American people how to adapt to our new normal. 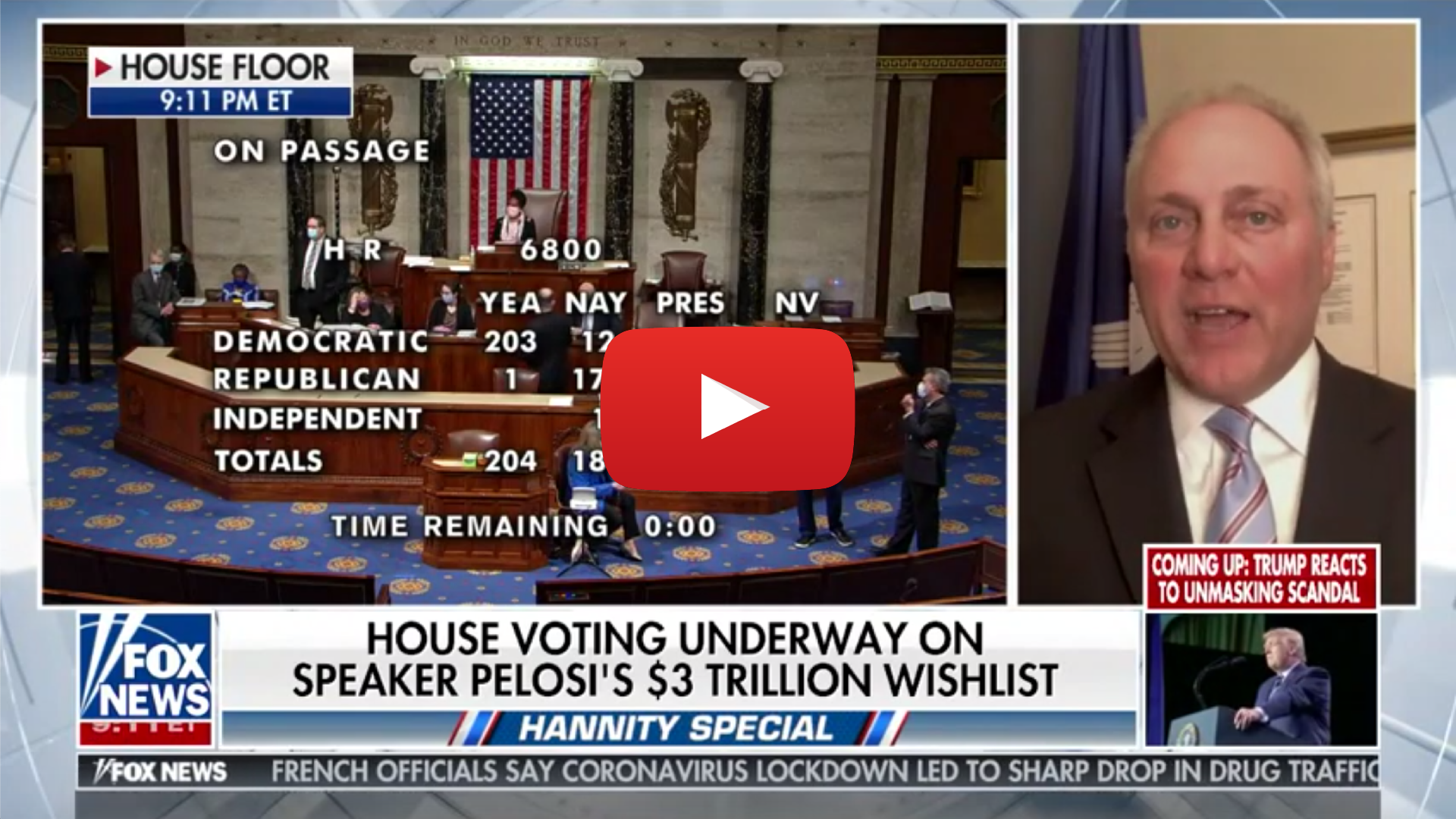 On Democrats using the Coronavirus crisis as a cover for a power grab that upends over 200 years of precedent:

“You know, the thing is it gives Nancy Pelosi power, but imagine being a Democrat who goes back home in a swing district. You just voted to give your voting card in Congress to Nancy Pelosi, and she doesn’t represent the values of a lot of those districts. You know, you now signed on for San Francisco values, and by the way, what are you doing now? Why are you collecting a paycheck if you want Nancy Pelosi to be the one to vote for you and represent your district, and you’re representing a swing state somewhere else? And so, this could be a tough vote for those people to explain, it’s unconstitutional first of all, because a quorum under this resolution they just passed – 20 people on the Floor – 20 Democrats can constitute a quorum of the House of Representatives, 435 people. That goes against Article One of the Constitution. They don’t seem to care about any of that, they just want to consolidate power and spend money. I mean, a drunken sailor would be offended to be compared to them and what they did with this bill. Money to illegals, taxpayer funding of abortion, this is crazy.”

“If [Democrats] pass any bill using these new rules, they haven’t done it yet, but they are now creating this opportunity to have 20 people on the Floor to constitute a quorum, and Nancy Pelosi [will] literally be able to hold the voting cards of so many of these people. It will be challenged.”

On Speaker Pelosi’s decision to shut down the people’s House during the time when it’s most important for us to lead by example:

“Can you imagine, even the United States Senate is going to work. And there is no reason [not to come back into session], we were here today voting. You know, there were about 24 Members who couldn’t make it out of 435. And so, to suggest that it’s complicated to get here is just fallacy. So, why she did this, it’s about a power grab. It surely has nothing to do with health and safety, because as you mentioned, you know, we’ve got our frontline workers back at home in our hospitals, our grocery stores, now in Louisiana today we just started opening up, so you can go into a restaurant today at 25% capacity. We could finally go back into places of worship, and yet she’s going to say that she doesn’t want Congress to be meeting in Washington debating bills. She just would rather just take your proxy vote and hold on to it so that she can vote for you. I’ll tell you this, and of course Jason, you would have never done this either. Nancy Pelosi is not going to get my vote, she surely would not have gotten yours. But for any of those folks that voted for this bill today, how do they go back home and explain today they voted to allow Nancy Pelosi to vote for them so that they don’t have to go to work anymore? Well then why don’t they just resign their seat and send somebody up here who wants to come and fight for restoring the American dream up here in Washington.”