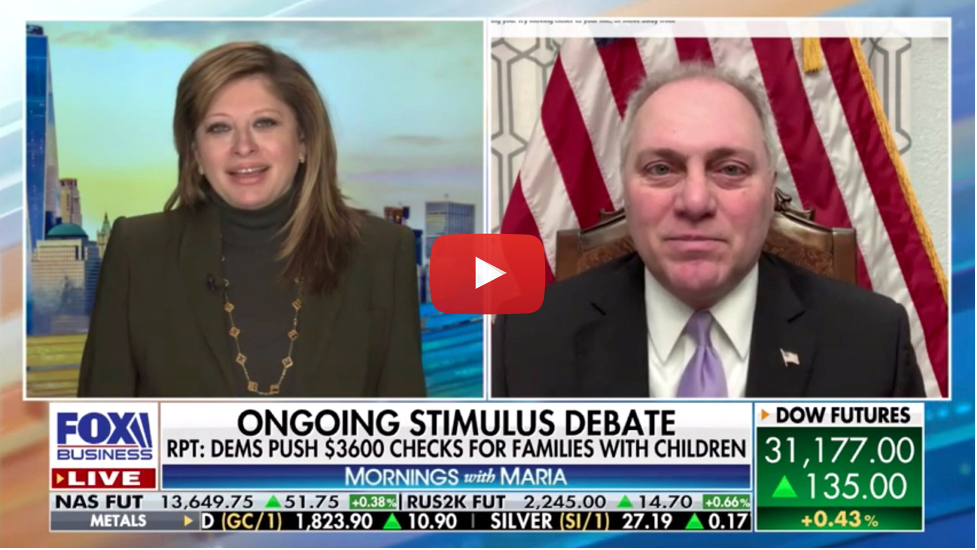 “Well, what should be in [the COVID relief package] is a focused effort on helping families get back to work, opening up economies again, more widely distributing the vaccine. Those are the kind of targeted things that Republicans have offered to work with the White House on, and for whatever reason they chose to go it alone with the Democrat only bill that really is just focused on giving more money away, including to failed states, something that hadn’t been done in all the bipartisan COVID relieve packages prior to this one. So, you know, they’re moving in this direction, but as Art Laffer pointed out earlier, just throwing money around, and not just a little bit – we’re talking $1.9 trillion, Maria, that they want to spend without a single Republican vote. If you look at what’s still out there, there’s over [$1 trillion] dollars of unspent money from the previous COVID relief bills.

“What we suggested to the White House is why don’t you focus on working with us to make sure that money is being properly spent to help people get back on track, to widely distribute the vaccine. Not just a million vaccinations a day, which was the Trump plan, but let’s ramp that up. Let’s try to go to two million, have a bold plan to vaccinate 200 million people in the first 100 days. They don’t want to do that right now. I would rather see them focus the money strategically and especially the money that’s already sitting out there – [over $1 trillion] that hasn’t even been spent.”

“Here’s a case where the head of the unions, Richard Trumka, is exactly spot on. Unfortunately, what President Biden did starting day one was declare an assault on American jobs. He started in the energy sector with devastating moves like canceling the Keystone pipeline. Over 10,000 jobs eviscerated right there. But then he went after other things, cancelling leases and permits on federal lands. That’s going to affect almost every state, Maria, we’re talking about millions of jobs that will be lost. These aren’t jobs that are just going to go into installing solar panels. You know, John Kerry will get on his private jet and fly around and tell you not to fly on a commercial airliner. The hypocrisy of this is seething, but the devastating damage to America’s industries.

“We have become energy independent. We were exporting our energy to other countries, and by the way, when you make energy in America it actually emits less carbon because the energy is still going to be needed to run our economies and others. It’s just going to have to come from countries like Russia. So, you’ve given a gift to Russia. They emit more carbon to make it. We’re going to have to import energy from those countries. How devastating a policy and what a kick to the gut of hard-working families, middle-class, blue-collar jobs that are going to be wiped out. And they’re not just going to go to making solar panels. They’re going to go to foreign countries like Russia, like, you know, pick your nation, Saudi Arabia, other countries that are going to take our American jobs.”

On highlighting the devastating impacts President Biden’s energy policy will have on hard-working Americans:

“Well, the first thing we can do is form a coalition. When you’ve got the head of the unions saying this is devastating, not just bad policy, but devastating and will kill millions of American jobs, I don’t think people are going to sit back and tolerate it. They’re going to raise their hand up, they’re going to call their Member of Congress. There are Democrat Members of Congress that don’t want this either, by the way. We’re in a slim majority in the House and with just five Democrats joining us – look, four Democrats sent a letter to Joe Biden saying that his energy policies are going to devastate jobs. If we can get more of a drumbeat around the nation where people stand up and say, ‘Hold on a second, this isn’t the uniting policy that you, Joe Biden, promised during the campaign and in your inaugural speech. You’re devastating communities throughout this nation.’

“In Louisiana, the money he takes away from Port Fourchon, for example, and oil drilling is money that is not going to go to restoring our coast which is a major environmental issue. He’s going to hurt Louisiana’s environment. Many communities, [Rep. Kelly Armstrong (R-N.D.)] filed the bill on Keystone. They’re going to lose millions of dollars for their school system. So, I hope that [President Biden] revisits this. We’re going to keep raising awareness of what it is going to do to hardworking families.”