On President Biden’s unsafe and hypocritical COVID policies at the border: 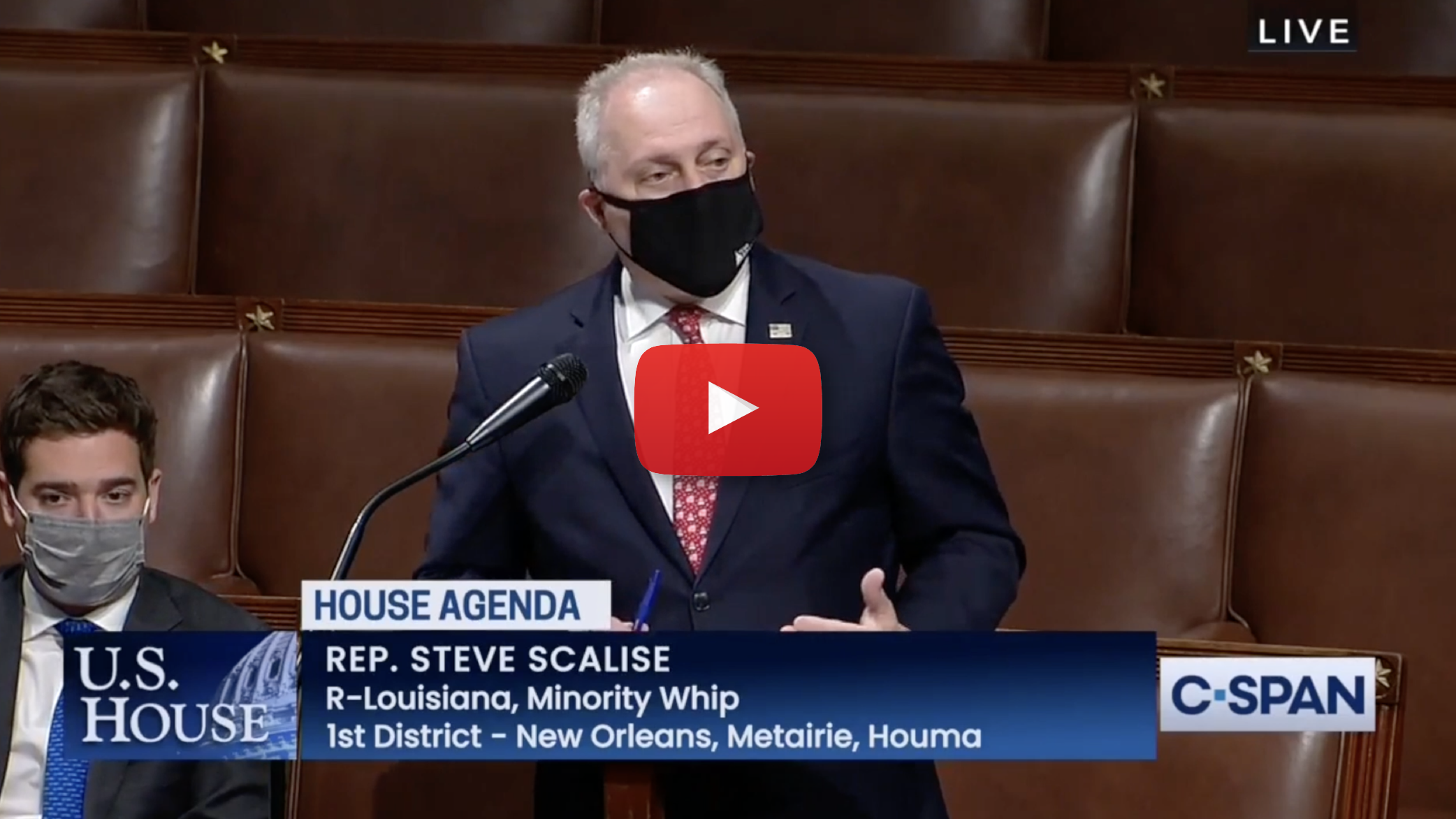 Click here or on the image above to watch the clip.
“I finally want to bring up the crisis that our nation is facing at our southern border. And this has been a crisis that’s been brewing for months. It’s not an overnight problem, but it is an executive order-created problem when President Biden on day one got rid of some policies that were working incredibly well.

“And every Border Patrol agent that I have talked to when I was on the border last week Thursday and Friday in McAllen, Texas, [and] Donna, Texas, at the Donna processing facility says the same thing. Getting rid of the ‘Remain in Mexico’ policy — that one action alone opened up the floodgates to a surge. Thousands of people a day crossing our border [illegally.]  Then, you couple that with the deterioration of the Northern Triangle agreements where, you know yes, it was President Trump who negotiated those agreements with Mexico, with Honduras, with El Salvador, with Guatemala. And maybe if President Biden just doesn’t like the fact that President Trump did something that was working well, why doesn’t he renegotiate those agreements and call them his own, but they were working. And now today, it’s so out of control that we have, for example, at the Donna Processing Facility, designed for about 250 person capacity. When I was visiting that facility last Friday, it was over 4,000 people, young kids primarily, crammed into that facility and those holding cells like sardines.

“In fact, yesterday, we had a committee hearing with Dr. Fauci and CDC Director Walensky. And I asked them specifically about what’s going on down at our southern border, showed them some of the pictures that have been taken. And If you look at the CDC guidance that’s out there on how we as American citizens have to conduct ourselves. If you own a restaurant, for example, whether it’s in Baltimore, New Orleans, or anywhere else, if there’s a capacity limit, and if that limit was 250 people, if there were 4,000 people in that restaurant, it would be shut down today. And I asked both Dr. Fauci and Dr. Walensky would that facility be in violation of CDC guidance? And both of them said yes in testimony under oath.

“And then, I talked to them about what’s happening at our southern border, and I asked them, ‘Are these conditions in compliance with CDC guidance?’ Both Dr. Fauci and Dr. Walensky said ‘no, this is not.’ We talked about the Donna Detention Facility and the inhumane treatment of these young children by the Biden Administration in that facility. And I asked Dr. Fauci, ‘Is that facility’s conditions in which they’re treating those young kids by the Biden Administration in compliance with CDC guidance?’ And Dr. Fauci said no, and Dr. Walensky, the CDC Director, testified the same exact way that no, those are not in compliance.

“And in fact, as we know they are coming across from Mexico. Do you know that the CDC guidance designates Mexico as the most dangerous nation right now, along with probably a few others, but they are the most dangerous in terms of COVID transmission? And so, CDC guidance encourages American citizens not to go to Mexico. But they say, if you do come back from Mexico, you are mandated by the CDC to show a COVID-negative test before you as an American citizen can come back into the United States. [Did] you know that not one of these people are being tested for COVID when they come in illegally across the Rio Grande from Mexico? And then many of them are being put on airplanes without ID, being paid for, free, most by the taxpayers, put on airplanes to fly off into cities all across the country. Border Patrol agents have told us at least 15 percent of these people that crossed illegally are COVID-positive.

“And so, I asked Dr. Walensky and I asked Dr. Fauci, ‘Does that process by the Biden Administration violate CDC guidance on travel from Mexico?’ And they both testified that yes, in fact, it does. That if they are getting on an airplane, they should [test] negative for COVID. None of them are, and in fact, some of them are known to be COVID-positive being put on airplanes, flying to cities all across this country. It’s going on right now. It was going on Friday. About half the plane that I was on when I flew from McAllen back home had people with folders that said, ‘I do not speak English,’ and it had a city on it. And it was multiple cities. But this is what the Biden Administration is doing in violation of CDC guidance that you and I have to follow – that our constituents who are seeing their livelihoods crushed, their restaurants being closed down, many that won’t open again forever because they have to play by the rules that CDC and their states issue. And yet, the Biden Administration’s exempting themselves from this.

“Now, we have legislation I’d like to bring up to the Majority Leader that would fix this. And my colleague, Ms. Miller-Meeks’ [legislation], requires a COVID test before someone’s released from CBP custody. Ms. Herrell’s [legislation] prohibits DHS from ceasing Title 42. There’s a bipartisan bill by Mr. Katko and Mr. Cuellar which establishes an Irregular Migrant Migration Surge Response Fund. I would like to ask the gentleman if he would bring those bills to the Floor to address this crisis at the border that’s not only a humanitarian crisis, a national security crisis, but it’s a Biden-created crisis that’s violating the very CDC guidance, according to Dr. Fauci, that American citizens have to follow.”

On Democrats’ un-democratic efforts to pack the court: 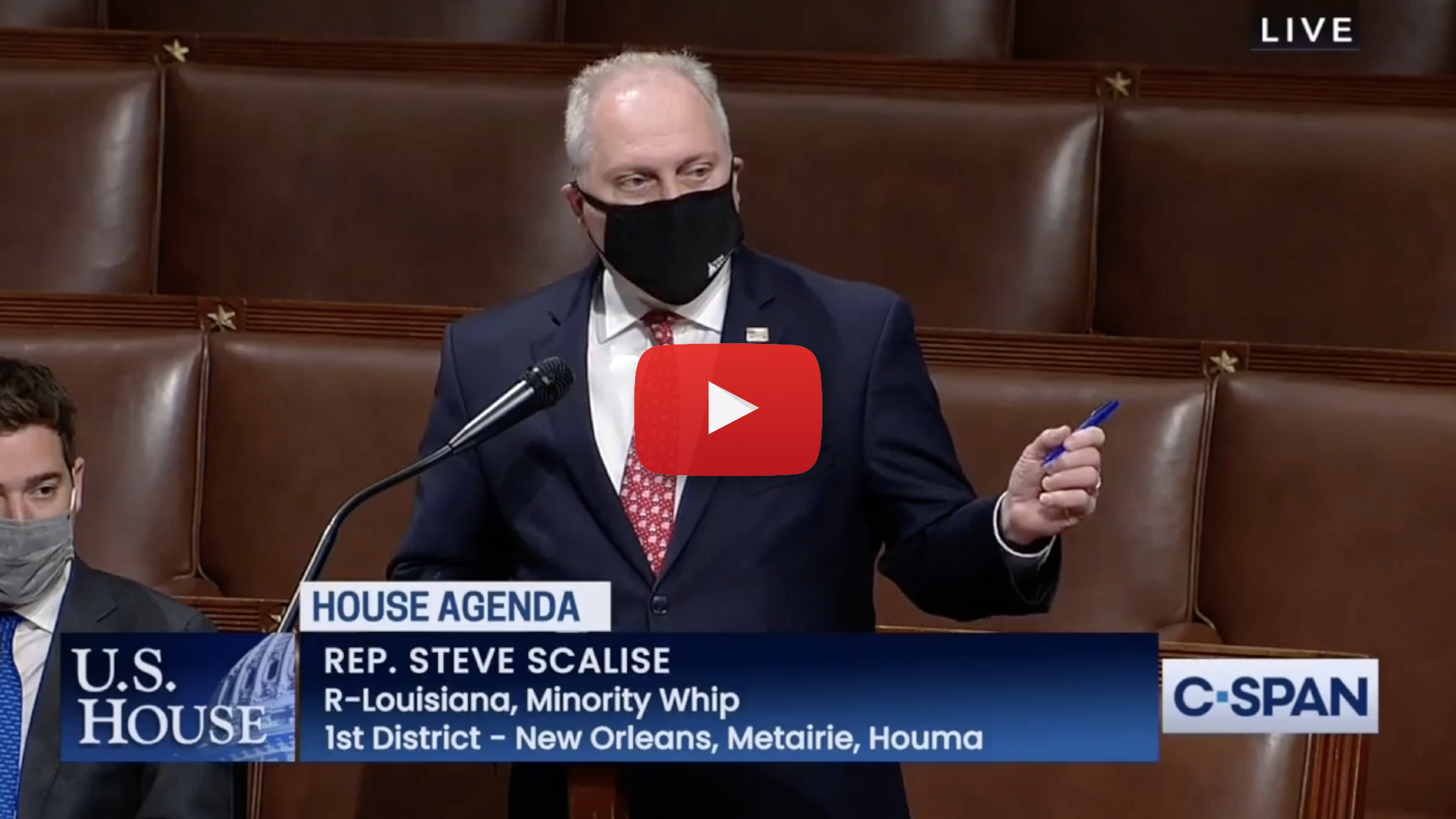 Click here or on the image above to watch the clip.
“I know just yesterday, one of the members of the House Democrat Leadership team, Chairman Nadler, introduced a bill to pack the Supreme Court. This is a proposal that we’ve seen in other countries. Unfortunately, it’s mostly socialist countries if you look at some of the examples. In 2004, Venezuela Dictator Hugo Chavez packed his Court, and the result was totalitarian dominance for his socialist regime. Congressman Gimenez, who himself fled Cuba, fled a communist regime, said just recently on court-packing, ‘Packing the Court is a tactic used by brutal dictatorships to consolidate the socialist power which resulted in tens of thousands of court rulings in its favor, basically destroying the country.’ I wanted to ask the gentleman, is that court-packing bill a bill that the Majority is going to be bringing to the Floor or even marking up in committee? And I would yield.”
On Democrats’ radical court packing scheme: 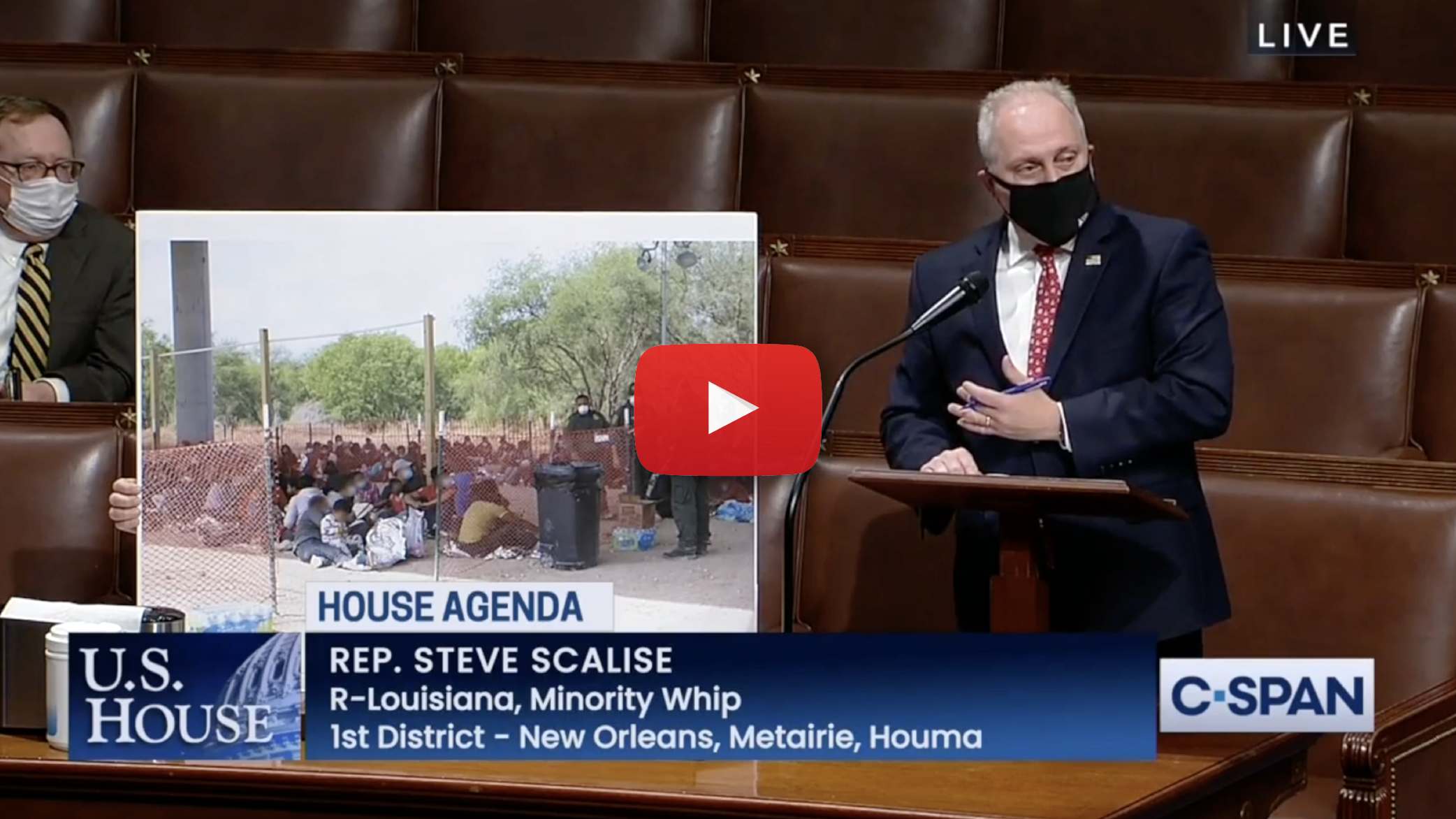 Click here or on the image above to watch the clip.
“This is the bill. It’s only a page, and not even two pages, [it’s] not even a page and a half. But the real change in law by the member of House Democrat Leadership, Chairman Nadler says, ‘A Chief Justice of the United States and 12 Associate Justices, any eight of whom shall constitute a quorum.’ So in essence, [it is] a hostile takeover of the United States Supreme Court. Not going through the traditional process that’s been in place for over 100 years. I think the gentleman knows if you go back historically, the President in power when the Senate was held by a different party was led by a different party, I can’t recall a case in generations, where if in the election year there was a vacancy in the Supreme Court, it was filled. Everybody in the country knew that that was an issue in the election of 2016. In fact, it was probably one of the deciding issues that helped elect President Trump was that there was that vacancy, and the public wanted to be engaged in the direction of the country as well as the direction of the Court. It was absolutely a heavily debated item in the 2016 presidential election, and President Trump won that election. But again, I’ve never heard anybody suggesting changing the Constitution to take away the Senate’s advise and consent rule.

“But we do see here a bill that was filed just this week by a leader in the Democrat Party to have a hostile takeover of the Supreme Court similar to what’s been done in socialist countries. And I think it’s important to point out how who’s proposed those [kinds] of changes in the past, and what it’s led to.

“And I know President Biden himself is on record many times criticizing heavily the idea of packing the Supreme Court. Now, that was before he was President. Now, that it would be him that would be able to appoint these extra judges. I don’t know if his position’s changed, but it’s [a] dangerous precedent. It’s the kind of precedent that exists in Soviet-style nations. I sure hope it’s not here, but Mr. Nadler did just say yesterday when asked about Speaker Pelosi’s position, he said, ‘Speaker Pelosi and others will come along.’ So, I was just wondering if that was something that the gentleman was planning on bringing to the Floor that would be a divisive issue as opposed to things that we could work together like infrastructure that would be unifying.”

On Democrats’ refusal to work with Republicans: 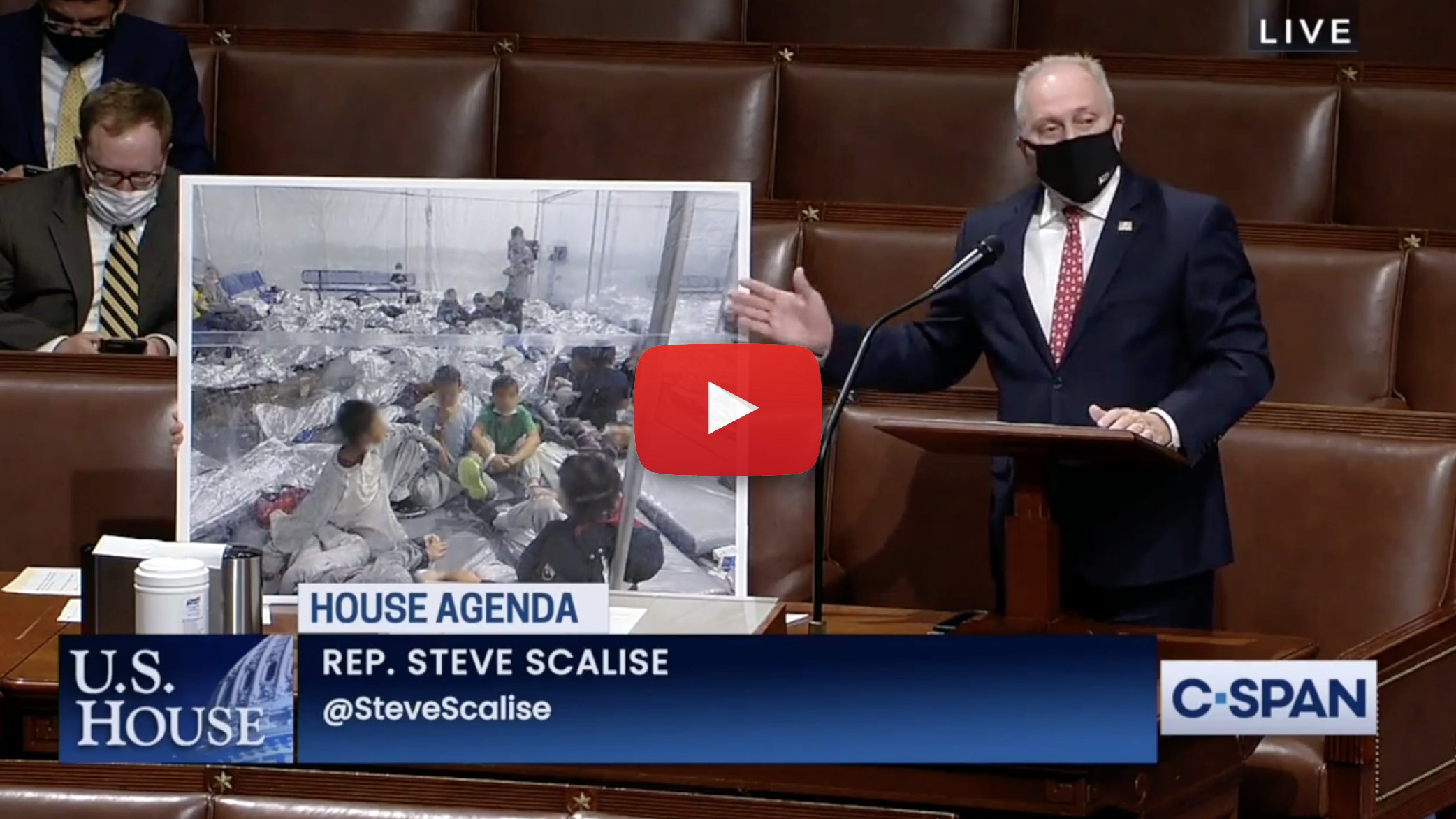 Click here or on the image above to watch the clip.
“Obviously, there is a lot of talk about infrastructure. This is something that there’s tremendous interest on both sides of the aisle. I know Chairman DeFazio as well as the Ranking Member Sam Graves have had a lot of conversations about things that we could agree on. I would hope that would be the approach that we take, unlike the bill that over 90 percent of which had nothing to do with COVID, the $1.9 trillion spending bill which was hyper-partisan.

“I hope we approach this in a bipartisan way because as I’ve said there are clearly Members on both sides that want to agree on an infrastructure bill and have lots of areas of agreement if we are talking about infrastructure. And by infrastructure, I think most Americans, if you ask them what they thought was infrastructure, would say roads, bridges, ports, waterways, broadband.

“Once you get into social policy and Green New Deal-type policies or tax hikes that would make America the highest rate above communist China in terms of tax policy. [The] National Association of Manufacturers said that the kind of proposal that’s being floated in the partisan approach would kill over a million American jobs. And so, I appreciate the gentleman from Maryland talked about jobs. Why would we want to approach this in such a partisan way that we would threaten millions of jobs? That would make America uncompetitive again, and communist China would have a lower tax rate than America. Hopefully, we do the bipartisan approach, not a partisan approach. I would yield to the gentleman to enlighten us on what direction is being approached right now.”