WASHINGTON, D.C.—House Republican Whip Steve Scalise (R-La.) pressured Majority Leader Steny Hoyer (D-Md.) during today’s colloquy to explain why Chairman Schiff and House Democrats are so determined to keep impeachment proceedings secret from other Members of Congress and the American people. Whip Scalise blasted Democrats for selectively leaking details from closed-door hearings to damage the President and form a false narrative in real time. In order to bring some transparency and integrity to Speaker Pelosi’s sham impeachment process, Whip Scalise also introduced a rules change to allow all Members of Congress access to committee proceedings related to impeachment, and called on his fellow lawmakers to pass the resolution, H. Res. 639, the Open and Transparent Impeachment Investigation Resolution, immediately.

On introducing a rules change to allow all Members access to impeachment proceedings: 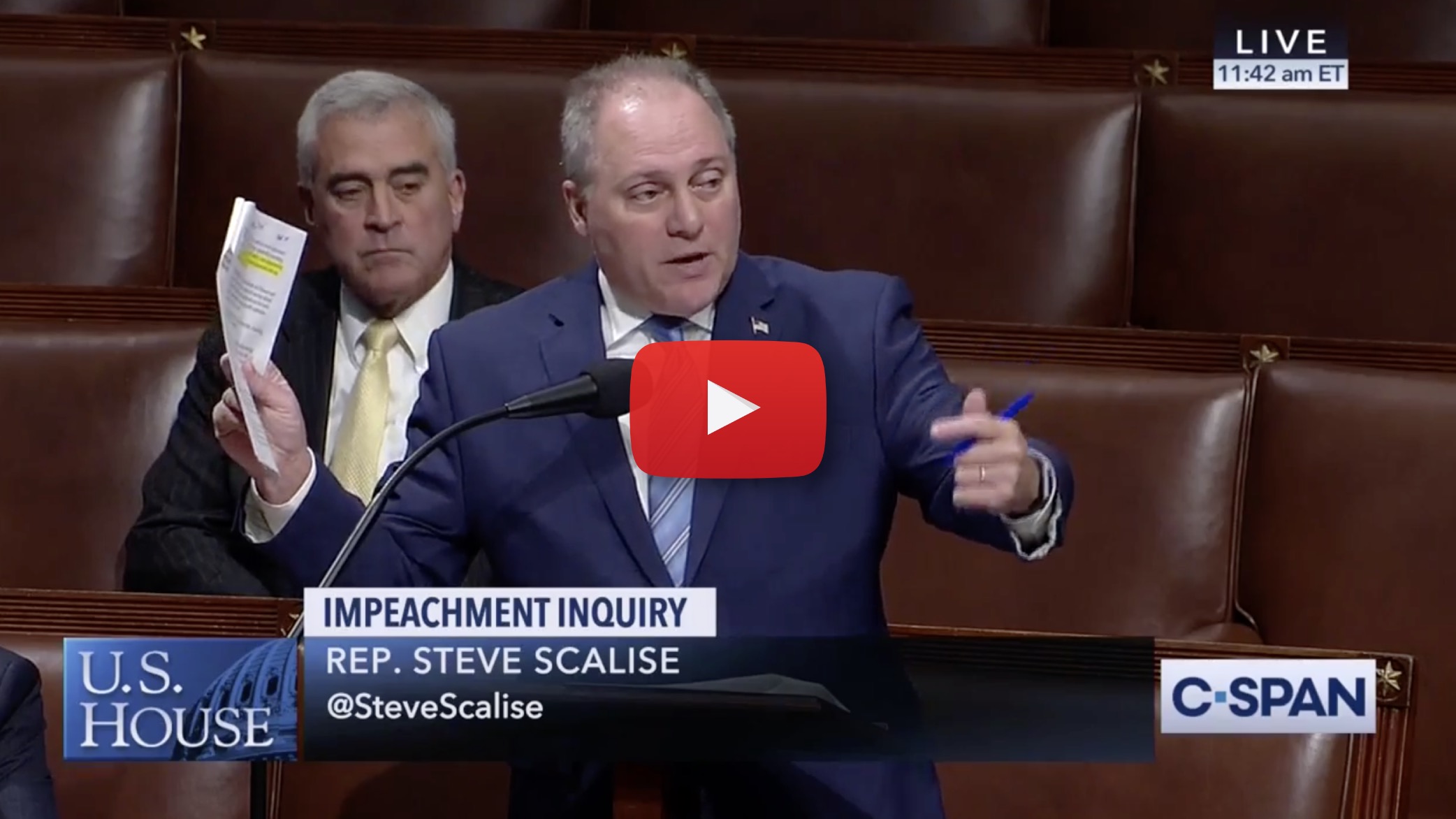 Click here or on the image above to watch the clip.
“Because it’s all a focus of secrecy, drip drab leaks selectively to try to give a false narrative. Our members can’t go talk to our other colleagues about some of the things that happen in those hearings, it’s all secret. We want it to be opened up. In fact, that’s why I filed a rule change. And again, I would ask the gentleman would he support a rule change that would allow all members to participate and be involved in at least sitting in on these hearings to see what’s really going on. If you’re going to ask people to impeach the President of the United States, and again, it’s always been done by the vote of the House – now it’s being done by a decree from the Speaker – and you won’t answer the question of whether or not yes or no it’s an impeachment inquiry. The Speaker said it’s an impeachment inquiry, but [the House] never voted on it. Why don’t we have a vote like we did all other times to set real rules of fairness? They always set rules of fairness where both sides got to participate, real due process, which is part of our Constitutional duty. That’s being denied in secret, that’s what’s happening in that room right now.”

On Democrats’ rotten impeachment process that is shrouded in secrecy: 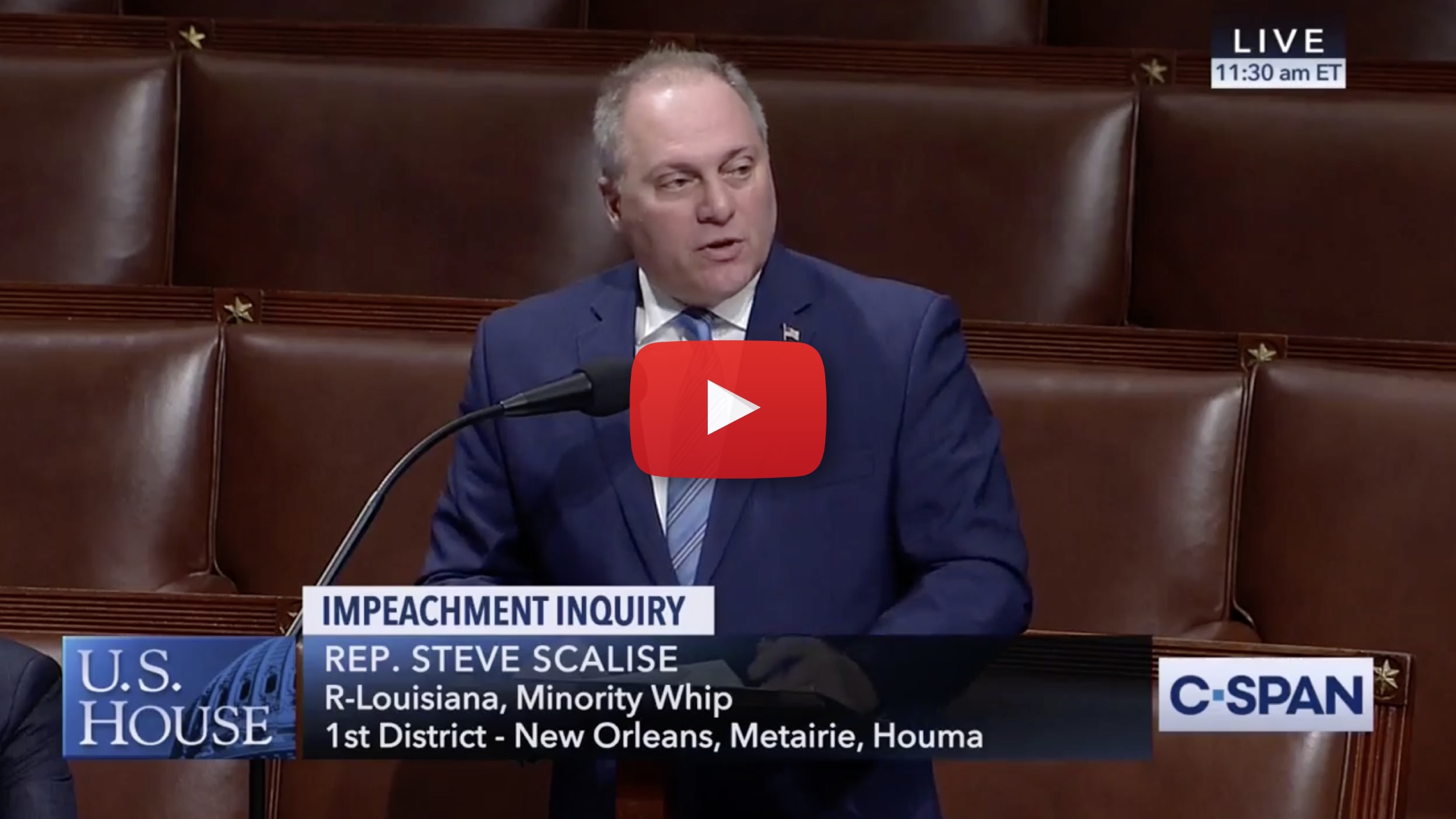 “With all due respect, this process is rotten to the core. You can talk about process, you can talk about facts, and the facts point out that this process is shrouded in secrecy. You literally have a Chairman [Adam Schiff] who was running around for two years during the whole Mueller investigation saying he had quote ‘more than circumstantial evidence’ that there was collusion between the President and Russia. And then the Mueller report comes out and there were no charges, there was no collusion. In fact, the Chairman never showed his secret evidence. If he had evidence, ‘more than circumstantial,’ his quotes, then he should have showed it to the American people. But he didn’t, because there was no evidence. Those were the facts. And if the facts were there, you know he would have shown that evidence. It didn’t exist. And so instead of moving on and taking care of the work of the people in this country, it’s another witch hunt. It’s another fishing expedition – in secret. And so you talk about fairness, why is it that voting members of Congress are being denied access to the room? The press doesn’t have access to these hearings that you call fair. You call them fair. There was never even a vote of this House to start an impeachment inquiry.”

On Democrats refusing to give a straight answer on the House being in an impeachment inquiry: 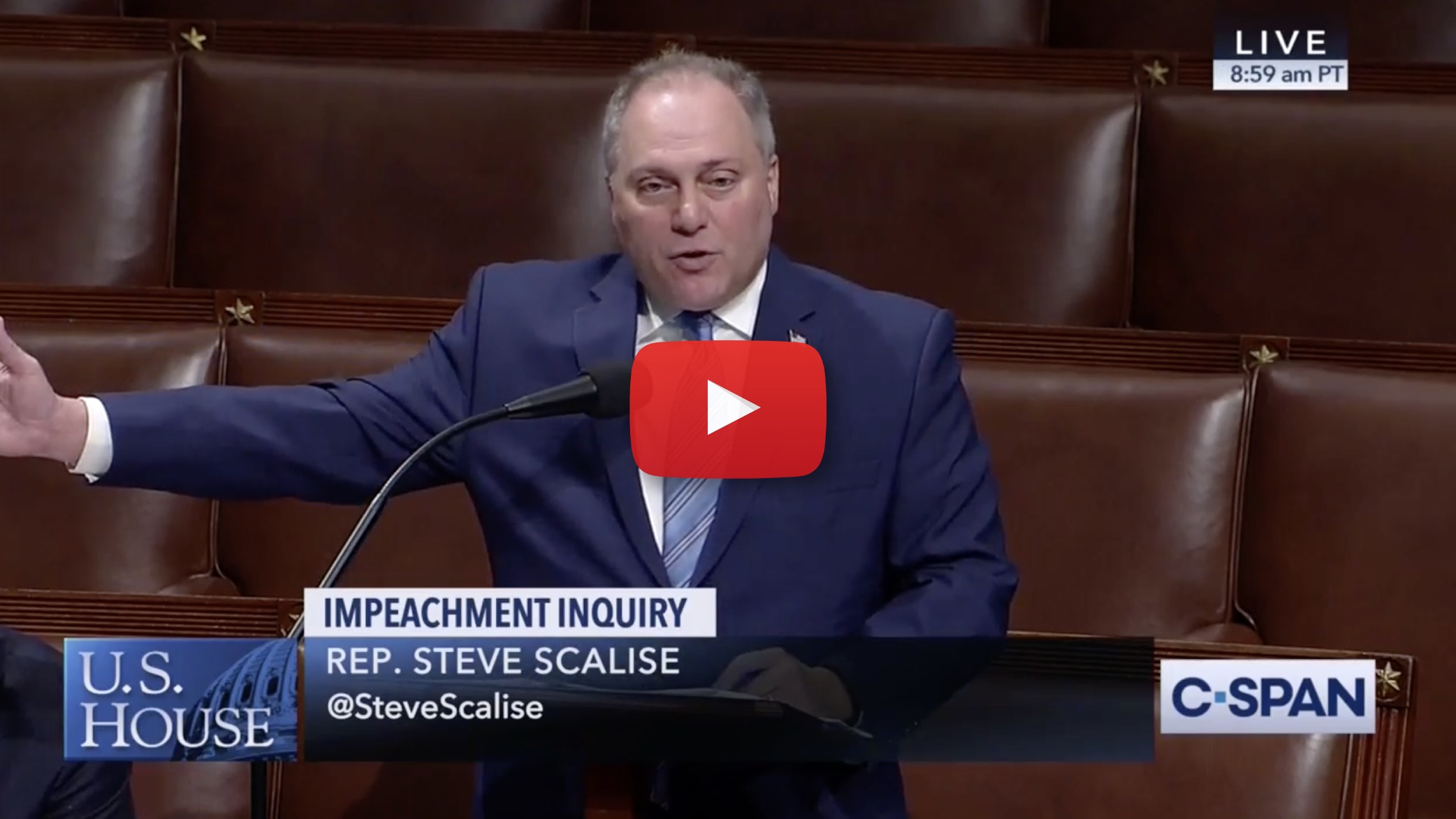 Click here or on the image above to watch the clip.
“Every time there’s been an impeachment inquiry, all three times this House established those rules. And so, you want to deem an impeachment inquiry, by the Speaker’s decree, not a vote of the House. Well if you’re going to do it, then do it the fair way that it’s always been done where both sides can call witnesses, both sides can issue subpoenas, the White House can actually have counsel to ask questions to witnesses. Some who have made statements that have been deemed inaccurate, but you won’t allow the people that were there that can deem it inaccurate to come to testify because you don’t want both sides of the story. You want to be able to present some one-sided report and say ‘here this shows us what we wanted,’ because if a prosecutor wants to go and find somebody guilty, they can meander around and look. But that’s not the way it’s supposed to work: it’s supposed to work where the prosecutor sees something wrong, then they go out and in a fair process find it. That’s the Justice Department by the way, the Judicial Branch, that does it. Adam Schiff is not a prosecutor in this case, he might have been a prosecutor in his previous life, but he’s a Chairman of a committee in Congress now. He’s not a prosecutor but he’s acting like one. And he’s doing it in secret without fair rules. I can’t go into that hearing and you can’t go into that hearing. Rank-and-file members can’t go into that hearing – they’re being denied today, the ability to do it. You could change that rule. If it’s truly an impeachment inquiry, and again you won’t answer the question yes or no, but the Speaker said it is. And if it is, then treat it like every other impeachment inquiry where there is fair, due process on both sides – not just your side. You might like the fact that only you can call witnesses, but you know that’s not fair, you know that’s not a fair process, and it’s not how it’s been done in all other cases. And so, I would just ask the gentleman, would he be willing to treat this impeachment inquiry, as the Speaker designated it, like all of the other impeachment inquiries in the history of this Congress have been held in a fair process?” 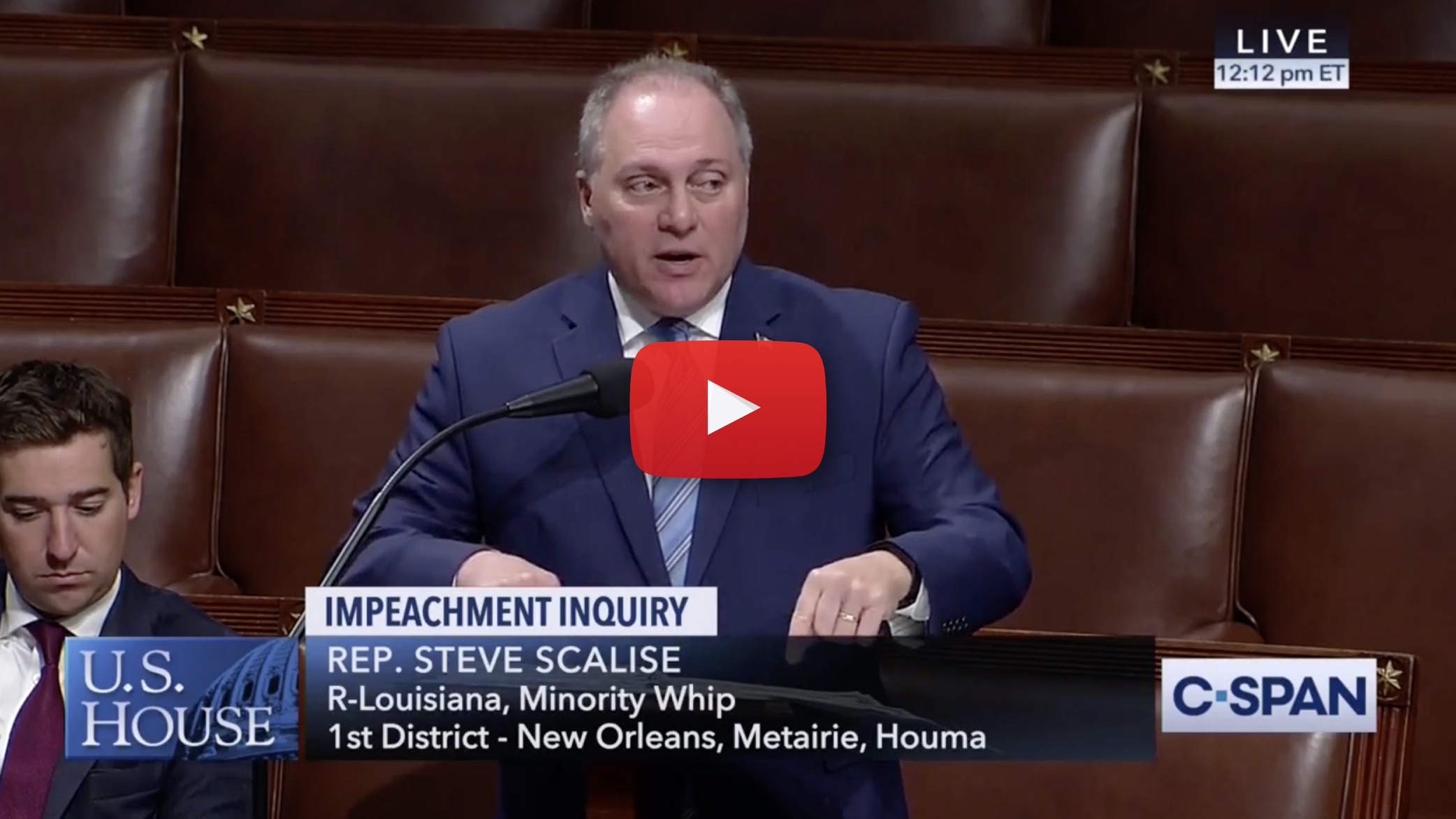 “We’ve got to address the fundamental question of the precedent that you are trashing and rolling over and running backward over is that there have been three – only three in the history of our country – impeachment inquiries. All of them started with a full vote of the House, and all of them had rules of fairness where both sides could participate. That’s not the case here, that’s not a fairness. It’s surely not how it’s been done all other times. Maybe you think the other three times it was done wrong and you’ve got a better way, but the public doesn’t buy it. That’s not fair when you only let one side tell their version.

“The polls reflect that there is going to be an election next year, and [the public] want to be able to decide the next President. They don’t want the Speaker and Chairman Schiff to be deciding, behind closed doors, who the next President will be. That’s not how we should be conducting business. We should be moving on to other issues, like those bills that would lower drug prices, like bills that will address so many other problems that families are facing. Where there’s actual work, bipartisan work, that’s being done by relevant committees and they’re moving bills [out of committee], and none of them are moving through this House in a bipartisan way that could become law. And so, we sit here just days away from a potential government shutdown and what’s the focus? The focus is on a one-sided, closed-door, impeachment inquiry instead of those issues.”