WASHINGTON, D.C.—During colloquy, House Republican Whip Steve Scalise (R-La.) questioned Majority Leader Steny Hoyer (D-Md.) on his party’s efforts to shut Republicans out of the legislative process. Whip Scalise emphasized how Democrats promised a more open and fair process, but in comparison to the Republican-led Congress have fallen far short. He used the refusal to allow amendments from Rep. Brian Fitzpatrick (R-Pa.), a former FBI agent who investigated voter fraud, to H.R. 1 as an example of how Democrats are shutting out Republican issue experts and their proposals. Finally, Whip Scalise questioned why Democrats did not condemn hate from all sides in the diluted resolution they put on the floor yesterday by failing to include death threats made from the left against many members of Congress, including his own experience of being nearly shot to death by a leftist. 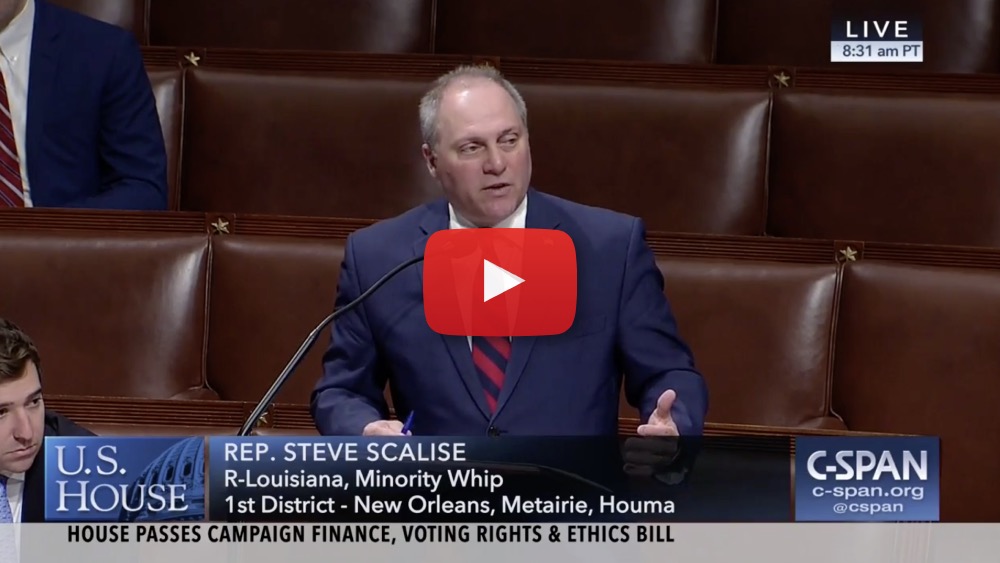 Highlights from colloquy are below.

On Democrat efforts to shut out Republicans from the legislative process:

“I’d like to ask the gentleman from Maryland about the process that we have had so far this Congress in terms of amendments that have been submitted on the House floor on legislation and the way that it’s been incredibly closed, especially in a partisan way, to Republican amendments. If you look just at the bill we debated a few minutes ago, H.R. 1, only 11 percent of Republican amendments were made in order. More than 60 percent of Democrat amendments were made in order.

“If you look at the entire Congress, so far this year there were only 16 percent of Republican amendments made in order. While 73 percent of Democrat amendments were made in order, which does reflect poorly on the promise that this would be a more open process.

“I’d ask the gentleman from Maryland, can you address at least in the future to make this a more fair and open process so that you’re not closing out opportunities over and over again for Republican amendments to be made in order?”

“You want to talk about a closed process, let’s also talk about the policy that’s being closed out. If you want to shut out efforts to clean up voter fraud, that’s your prerogative, but ultimately it’s not what you promised when you took the majority.”

On Republicans’ motion to increase election fairness and prevent non-citizens from voting:

“If you cite, as you did, the motion to recommit that we had on H.R. 1 just a little while ago, it actually was identifying a serious problem. It mentioned in that motion to recommit what happens in some communities where they are allowing and want illegals to vote, people that are here illegally to vote in elections, whether it’s school board elections or any other.

“Then you have a process, where if somebody has an ID they are automatically sent to the voter registration files. It creates a process where corruption can occur, where people who are here illegally can get on voting rolls. Maybe you catch it at the local level, maybe you don’t, but it creates that opportunity. We had a motion to prevent that from happening. Unfortunately that motion to recommit failed.”

On the failures of Democrats’ resolution to condemn hate:

“Why did the resolution fall short in so many areas? Because it was so hastily put together. That’s not how we should address an issue this important.”